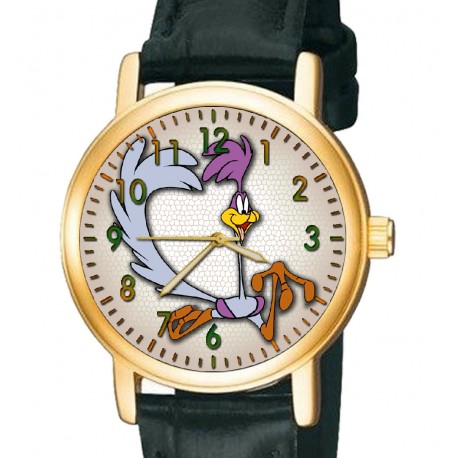 As in other cartoons, the Road Runner and the coyote follow the laws of cartoon physics. For example, the Road Runner has the ability to enter the painted image of a cave, while the coyote cannot (unless there is an opening through which he can fall). Sometimes, however, this is reversed, and the Road Runner can burst through a painting of a broken bridge and continue on his way, while the Coyote will instead enter the mirage painting and fall down the precipice of the cliff where the bridge is out. Sometimes the coyote is allowed to hang in midair until he realizes that he is about to plummet into a chasm (a process occasionally referred to elsewhere as Road-Runnering or Wile E. Coyote moment). The coyote can overtake rocks (or cannons) which fall earlier than he does, and end up being squashed by them. If a chase sequence happens upon a cliff, the Road Runner is not affected by gravity, whereas the Coyote will realize his error eventually and fall to the ground below. A chase sequence that happens upon railroad tracks will always result in the Coyote being run over by a train. If the Coyote uses an explosive (for instance, dynamite) that is triggered by a mechanism that is supposed to force the explosive in a forward motion toward its target, the actual mechanism itself will always shoot forward, leaving the explosive behind to detonate in the Coyote's face. Similarly, a complex apparatus that is supposed to propel an object like a boulder or steel ball forward, or trigger a trap, will not work on the Road Runner, but always will on the Coyote. For instance, the Road Runner can jump up and down on the trigger of a large animal trap and eat bird seed off from it, going completely unharmed and not setting off the trap; when the Coyote places the tiniest droplet of oil on the trigger, the trap snaps shut on him without fail. At certain times, the Coyote may don an exquisite Acme costume or propulsion device that briefly allows him to catch up to the Road Runner. This will always result in him losing track of his proximity to large cliffs or walls, and the Road Runner will dart around an extremely sharp turn on a cliff, but the Coyote will rocket right over the edge and fall to the ground.

In Chuck Amuck: The Life and Times Of An Animated Cartoonist,[11] it is claimed that Chuck Jones and the artists behind the Road Runner and Wile E. cartoons adhered to some simple but strict rules: