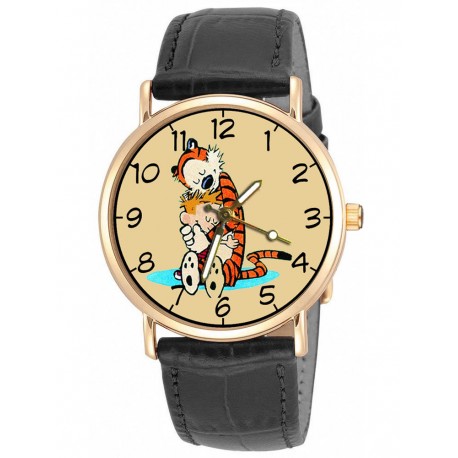 Calvin and Hobbes is set in the contemporary United States in an unspecified suburban area. The strip depicts Calvin's flights of fantasy and his friendship with Hobbes, and also examines Calvin's relationships with family and classmates. Hobbes' dual nature is a defining motif for the strip: to Calvin, Hobbes is a live anthropomorphic tiger; all the other characters see him as an inanimate stuffed toy. Though the series does not mention specific political figures or current events, it does explore broad issues like environmentalism, public education, philosophical quandaries, and the flaws of opinion polls.

Calvin and Hobbes was conceived when Bill Watterson, working in an advertising job he detested, began devoting his spare time to cartooning, his true love. He explored various strip ideas but all were rejected by the syndicates. United Feature Syndicate finally responded positively to one strip, which featured a side character (the main character's little brother) who had a stuffed tiger. Told that these characters were the strongest, Watterson began a new strip centered on them. Though United Feature rejected the new strip, Universal Press Syndicate eventually took it.

The first strip was published on November 18, 1985,[8] and the series quickly became a hit. Within a year of syndication, the strip was published in roughly 250 newspapers. Before long the strip was in wide circulation outside the United States. By April 1, 1987, Watterson and his work were featured in an article in The Los Angeles Times.[6] Calvin and Hobbes twice earned Watterson the Reuben Award from the National Cartoonists Society in the Outstanding Cartoonist of the Year category, first in 1986 and again in 1988. He was nominated again in 1992. The Society awarded him the Humor Comic Strip Award for 1988.

Watterson took two extended breaks from writing new strips, from May 6, 1991, to February 1, 1992, and from April 4 through December 31, 1994. In 1995, Watterson sent a letter via his syndicate to all editors whose newspapers carried his strip:

I will be stopping Calvin and Hobbes at the end of the year. This was not a recent or an easy decision, and I leave with some sadness. My interests have shifted however, and I believe I've done what I can do within the constraints of daily deadlines and small panels. I am eager to work at a more thoughtful pace, with fewer artistic compromises. I have not yet decided on future projects, but my relationship with Universal Press Syndicate will continue. That so many newspapers would carry Calvin and Hobbes is an honor I'll long be proud of, and I've greatly appreciated your support and indulgence over the last decade. Drawing this comic strip has been a privilege and a pleasure, and I thank you for giving me the opportunity.

The 3,150th and final strip ran on Sunday, December 31, 1995. It depicted Calvin and Hobbes outside in freshly fallen snow, reveling in the wonder and excitement of the winter scene. "It's a magical world, Hobbes, ol' buddy... Let's go exploring!" Calvin exclaims as they zoom off over the snowy hills on their sled, leaving, according to one critic ten years later, "a hole in the comics page that no strip has been able to fill."