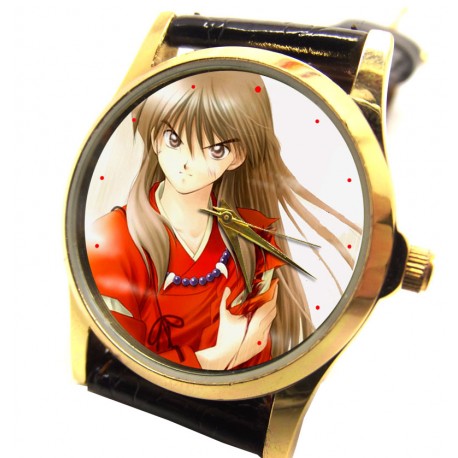 InuYasha (犬夜叉?), also known as InuYasha, a Feudal Fairy Tale (戦国御伽草子 犬夜叉 Sengoku Otogizōshi InuYasha?), is a Japanese manga series written and illustrated by Rumiko Takahashi. It premiered in Weekly Shōnen Sunday on November 13, 1996 and concluded on June 18, 2008. The series follows the half demon, InuYasha, and a teenager from Tokyo, Kagome Higurashi, who is transported to the Sengoku period, where she meets him. When a monster from that era tries to take the magical Jewel of Four Souls embodied in Kagome, she accidentally splits the Jewel into various shards, which are dispersed across Japan. InuYasha and Kagome start travelling to recover it, gaining allies and enemies throughout the journey. In contrast to the typically comedic nature of many of her previous works, InuYasha deals with darker subject matter, using the setting of the Sengoku period to easily display the violent content. Earlier works by Takahashi with more dramatic and serious themes include her work, Mermaid Saga - though it is considerably darker in nature than Inuyasha - and many of her short stories.

The manga was published in North America by Viz Media with all of its 56 tankōbon volumes having already been released. The manga was adapted into two anime television series produced by Sunrise. The first, broadcast for 167 episodes onYomiuri TV in Japan from October 16, 2000 until September 13, 2004, was directed by Masashi Ikeda for the first forty-four episodes and by Yasunao Aoki for the remainder. The second series, called InuYasha: The Final Act (犬夜叉 完結編, InuYasha Kanketsu-hen), began airing October 3, 2009 to cover the rest of the manga series and ended on March 29, 2010. Viz Media licensed the two anime series, having released the former in DVD volumes and aired most of its episodes. A total of four feature films and an original video animation have also been released. Other merchandise include video games and a light novel.

The story begins in Tokyo, Japan, with a fifteen-year-old middle school girl named Kagome Higurashi, who lives on the grounds of her family's hereditary Shinto shrine. When she goes into the well house to retrieve her cat, Buyo, a centipede demon bursts out of the enshrined Bone Eater's Well and pulls her through it. As she leaves the well, Kagome appears in the ancient Sengoku period of Japan. During the demon's previous attack, a magical jewel known as the Sacred Jewel of Four Souls (Shikon no tama) was embodied from Kagome. She then becomes the demon's target and it tries to consume the Jewel and kill Kagome. In desperation, Kagome unseals the half-dog demon, half-human InuYasha who was placed on a tree fifty years ago by Kagome's incarnation Kikyo, the young miko of the village in charge of the Sacred Jewel who had, upon her death, requested that the Jewel be burned in her funeral pyre so no one could ever abuse its tremendous power. Although InuYasha destroys the centipede, the Sacred Jewel is later shattered into numerous shards that disperse across Japan. Even the individual shards are capable of granting great power of the whole entire Jewel, and are eagerly sought by humans and demons alike. InuYasha and Kagome set out to collect the shards to avoid disasters caused by the Sacred Jewel of Four Souls.

Along the way, they join forces with Shippo, a small fox demon who is orphaned, Miroku, a monk who suffers from a curse his ancestors were given by a powerful demon, Sango, a demon-slayer whose clan was killed by a group of demons. They are mainly opposed by Naraku, a devious and powerful collective, shape-shifting half-demon who manipulated the initial conflict between Kikyo and InuYasha, Sango's clan's destruction and was responsible for Miroku's curse. Naraku collects the shards for himself and continues setting up traps on InuYasha and his companions to take Kagome's fragments of the Sacred Shikon Jewel. Other people they find are InuYasha's older half-brother Sesshomaru, who wishes to kill Naraku after he tried to manipulate him, Kikyo, now partially resurrected with a fragment of Kagome's reincarnated soul/spirit, and a wolf demon named Koga, most of whose comrades were killed by Naraku's forces.

Eventually, Naraku collects all of the shards and reassembles the Jewel of Four Souls into its original and complete form. Although Inuyasha and his allies defeat him, Naraku uses his immeasurable strength and power as the Shikon Jewel's owner to wish for Kagome's spirit to be trapped inside it with his own, which would allow Naraku to survive within it in eternal conflict with her. With Inuyasha by her side, Kagome wishes to get her spirit back,Katuri steals the Shikon Jewel and feels bad and lets her move,eat,talk,and more but not fight, She and Inuyasha are then thrown back to their own time periods and the Well shuts down, causing them to lose contact for the next three years. In that time, the Sengoku period has undergone changes: Sango and Miroku are married with three children together; Kohaku resumes his journey to become a strong demon slayer (with Kirara); Koga becomes leader of the Wolf Demon tribe and marries Ayame; and Shippo attains the seventh rank as a fox demon. Back in the present, eighteen-year-old Kagome graduates from high school and comes to a realization which allows the Bone-Eaters Well to work again. With approval from her mother, Kagome returns to the Sengoku period, where she stays with InuYasha.