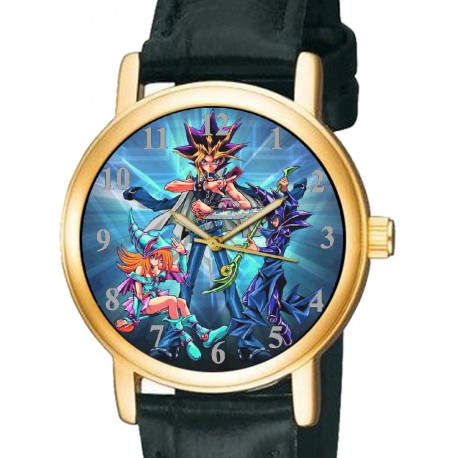 Yu-Gi-Oh! tells the tale of Yugi Mutou, a timid young boy who loves all sorts of games, but is often bullied around. One day, he solves an ancient artifact known as the Millenium Puzzle, causing his body to play host to a mysterious spirit. From that moment onwards, whenever Yugi or one of his friends is threatened by those with darkness in their hearts, this 'Dark Yugi' shows himself and challenges them to dangerous 'Shadow Games' which reveal the true nature of someone's heart. As the series progresses and its focus shifts to the fictional card game known as Duel Monsters, Yugi and his friends learn that this other Yugi inside of his puzzle is actually the spirit of an unnamed Phaoroah from Egyptian times who had lost his memories. As Yugi and friends attempt to help the Pharaoh regain his memories, they find themselves going through many trials and facing off against others wielding the mysterious Millenium Items.

The early chapters of Yu-Gi-Oh! feature a variety of different games; but from the Duelist Kingdom arc onwards, the focus is shifted to a card game called Duel Monsters. Duel Monsters is played using a holographic image system created by Seto Kaiba (following his first match with Yugi). In the manga and first series anime, these were initially performed on tables, using holographic tubes, while the second series anime uses huge holographic fields. Starting with the Battle City arc, (as well as the series that followed), duels are performed using portable Duel Disks, invented by Seto Kaiba, which allows duels to happen anywhere.

Kazuki Takahashi said that the card game held the strongest influence in the manga, because it "happened to evoke the most response" from readers. Prior to that point, Takahashi did not plan to make the series about a card game.

When an interviewer asked Takahashi if he tried to introduce younger readers to real life gaming culture referenced in the series, Takahashi responded by saying that he simply included "stuff he played and enjoyed", and that it may have introduced readers to role-playing games and other games. Takahashi added that he created some of the games seen in the series. The author stressed the importance of "communication between people," often present in tabletop role playing games and not present in solitary video games. Takahashi added that he feels that quality communication is not possible over the Internet.[2]

Takahashi said that the "positive message" for readers of the series is that each person has a "strong hidden part" (like "human potential") within himself or herself, and when one finds hardship, the "hidden part" can emerge if one believes in him/herself and in his/her friends. Takahashi added that this is "a pretty consistent theme."

The editor of the English version, Jason Thompson, said that the licensing of the Yu-Gi-Oh! manga had not been entirely coordinated, so Viz decided to use many of the original character names and to "keep it more or less violent and gory." Thomspon said that the manga "was almost unchanged from the Japanese original." Because the core fanbase of the series was, according to Thompson, "8-year-old boys (and a few incredible fangirls)," and because the series had little interest from "hardcore, Japanese-speaking fans, the kind who run scanlation sites and post on messageboards" as the series was perceived to be "too mainstream," the Viz editors allowed Thompson "a surprising amount of leeway with the translation." Thompson said that he did not "abuse" the leeway he was given.[3] In a 2004 interview, the editors of the United States Shonen Jump mentioned that Americans were surprised when reading the stories in Volumes 1 through 7, as they had not appeared on television as a part of the second anime series. Takahashi added "The story is quite violent, isn't it? [laughs]"