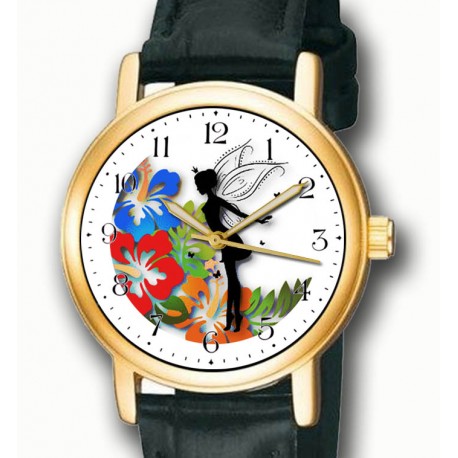 Tinker Bell (Tink for short), is a fictional character from J. M. Barrie's 1904 play Peter Pan and its 1911 novelization Peter and Wendy. She has appeared in multiple film and television adaptations of the Peter Pan stories, in particular the 1953 animated Walt Disney picture Peter Pan. She also appears in the official sequel Peter Pan in Scarlet by Geraldine McCaughrean commissioned by Great Ormond Street Hospital as well as the "Peter and the Starcatchers" book series by Ridley Pearson and Dave Barry.

At first only a supporting character described by her creator as "a common fairy", her animated incarnation was a hit and has since become a widely recognized unofficial mascot of The Walt Disney Company, and the centrepiece of its Disney Fairies media franchise including the direct-to-DVD film series Tinker Bell and Walt Disney's Wonderful World of Color.

In original play and novel

Barrie described Tinker Bell, the fairy who mended pots and kettles, an actual tinker of the fairy folk.[1] Her speech consists of the sounds of a tinkling bell, which is understandable only to those familiar with the language of the fairies.

Though sometimes ill-tempered, spoiled, jealous, vindictive and inquisitive, she is also helpful and kind to Peter.[2] [3] The extremes in her personality are explained in the story by the fact that a fairy's size prevents her from holding more than one feeling at a time, so when she is angry she has no counterbalancing compassion. Fairies can enable others to fly by sprinkling them with fairy dust (called "pixie dust" in the Disney films, and presented as "starstuff" in Dave Barry and Ridley Pearson's novel series).[4] At the end of the novel, when Peter flies back to find an older Wendy, it is mentioned that Tinker Bell died in the year after Wendy and her brothers left Neverland, and Peter no longer remembers her.

In the original stage productions, Tinker Bell was represented on stage by a darting light "created by a small mirror held in the hand off-stage and reflecting a little circle of light from a powerful lamp"[5] and her voice was "a collar of bells and two special ones that Barrie brought from Switzerland".[6] However, a 'Jane (or Jenny) Wren' was listed among the cast on the programmes as playing Tinker Bell; this was a joke which also helped with the mystique of the fairy character, and fooled H.M. Inspector of Taxes, who sent Jane Wren a tax demand.[6]

In the musical version of the play, she was also represented by a darting light, accompanied by a celesta. Her favourite insult (as in Barrie's play) is "You silly ass!", which the audience learns to recognise because it is always represented by the same motif: four notes (presumably one for each syllable of the phrase), followed by a growl on the bassoon.

Film adaptations provided the first vocal effects for the character, whether through sound, such as musical expressions or the sound of a tinkling bell, or human speech.

Tinker Bell as depicted in Disney media has become one of the company's most important icons.

In Walt Disney's Peter Pan, the character was animated and had no dialogue. Tinker Bell has become one of Disney's most important branding icons for over half a century, and is generally known as "a symbol of 'the magic of Disney'."[7] She has been featured in television commercials and programme opening credits sprinkling pixie dust with a wand in order to shower a magical feeling over various other Disney personalities, though the 1953 animated version of Tinker Bell never actually used a wand. In the picture and the official Disney Character Archives, she is referred to as a pixie.

There is an urban legend that the original animated version of Tinker Bell was modelled after Marilyn Monroe. However, Disney animator Marc Davis's reference was actressMargaret Kerry.[4][8] He illustrated Tinker Bell as a young, attractive, blonde haired, big blue eyed, white female, with an exaggerated hour-glass figure. She is clad in a short bright green dress with a rigid trim, and green slippers with white puffs. She is trailed by small amounts of pixie dust when she moves, and the dust can help humans fly if they think happy thoughts.

Since 1954, Tinker Bell has featured as a hostess for much of Disney's live-action television programming and in every Disney film advertisements flying over Disneyland with her magic wand and her fairy dust, beginning with Disneyland (which first introduced the theme park to the public while it was still under construction), to Walt Disney Presents, Walt Disney's Wonderful World of Color, and The Wonderful World of Disney. In 1988, she appeared in the final shot of the ending scene of Disney's Who Framed Roger Rabbit, along with Porky Pig; sprinkling fairy dust on the screen after Porky's trademark farewell as it goes black prior to the closing credits. She also starred alongside other Disney characters, such as Chip 'n Dale, in many Disney comics, where she was also able to speak. Tinker Bell also appears as a summon in the Kingdom Hearts series of video games and the card appearance in the video game Mickey's Memory Challenge on 1993. 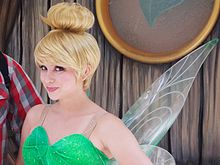 At Disneyland, Tinker Bell is prominently featured in Peter Pan's Flight, a suspended dark ride based on the artwork from the animated film. Beginning in 1961, she was also featured as a live performer who flew through the sky suspended from a wire from the top of the Matterhorn Bobsled Ride at the beginning of the nightly fireworks displays. She was originally played by 71-year-old former circus performer Tiny Kline, up until her retirement three years later.[9]

On the 2008 Walt Disney World Christmas Day Parade special on ABC, Disney announced that a Tinker Bell float would be added to the classic Disney's Electrical Paradeat Disney California Adventure Park at the Disneyland Resort, the first new float to be added decades.

Tinker Bell was originally a part of the Disney Princess franchise, from which she was later extracted and converted into the central character of the new Disney Fairiesfranchise in 2005. In addition to an extensive line of merchandise, 2008's Tinker Bell film is the first of five direct-to-DVD features set in Pixie Hollow.[10] Tinker Bell is voiced by Mae Whitman in these digitally animated DVD features.

At Disneyland, a Pixie Hollow meet-and-greet area opened on October 28, 2008, near the Matterhorn, where guests are able to interact with Tinker Bell and her companions. A similar area called "Tinker Bell's Magical Nook" is in Adventureland at Walt Disney World's Magic Kingdom in Florida.

In November 2009, Tinker Bell became the smallest waxwork ever to be made at Madame Tussauds, measuring only five and a half inches.

Since 2012's Secret of the Wings, Tinker Bell was the first Disney fairy to have a sibling, a twin sister named Periwinkle.