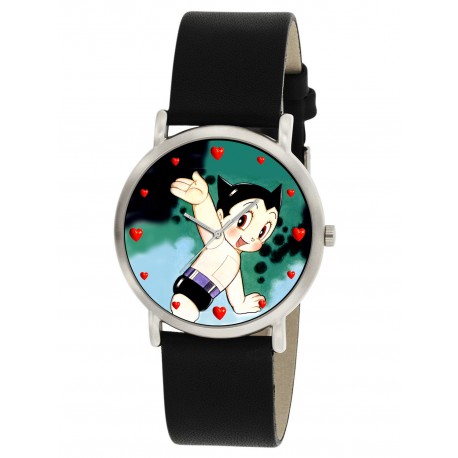 Astro Boy (鉄腕アトム Tetsuwan Atomu?, "Mighty Atom," lit. "Iron Arm Atom") is a Japanese manga series first published in 1952 and television program first broadcast in Japan in 1963. The story follows the adventures of a robot named Astro Boy and a selection of other characters along the way.

Astro Boy was adapted into the first popular animated Japanese television series that embodied the aesthetic that later became familiar worldwide as anime. It originated as a manga in 1952 by Osamu Tezuka, revered in Japan as the "God of Manga." After enjoying success abroad, Astro Boy was remade in the 1980s as Shin Tetsuwan Atomu, known as Astroboy in other countries, and again in 2003. In November 2007, he was named Japan's envoy for overseas safety.  An American computer-animated 3-D film based on the original manga series by Tezuka was released on October 23, 2009.

The Astro Boy series consists of several story-lines, some more than others. Many of which are self-contained. Frederik L. Schodt, who wrote the English language adaptation of the series, said that as Tezuka's art style advanced, Astro Boy "became more modern and 'cute'" to appeal to the audience of boys in elementary school. Schodt added that the page layouts used in Astro Boy episodes "became more creative." When designing supporting characters, Tezuka sometimes placed homages of Walt Disney, Max Fleischer, and other American animators. In several of the Astro Boy stories, the first few pages of each one were in color. Tezuka had a "Star System" of characters where different characters appeared ; several characters in Astro Boy appear in other works written by Tezuka. Schodt explained that Tezuka developed "a type of dialog with his readers" since he developed so many stories during his lifetime.[8] Tezuka often had a habit of introducing nonsensical characters at random moments in order to lighten a scene that he believed was becoming too serious. Tezuka sometimes felt trapped by the need to satisfy the young male audience's desire to see battling robots.

Tezuka used "Astro Boy" to imagine, in a 1950s perspective described by Schodt as "analog," a world where man and advanced technology coexist and the issues stemming from this fact. At the time, Japan did not have a reputation for science and technology that it had gained by 2002.

The collection that was originally issued by Akita Shoten under its Sunday Comics imprint had 23 volumes of paperbacks. The stories do not appear in order by the date of creation. Instead, they appear in the order that Tezuka and the collection editors believed was the most appropriate. The collection begins with "The Birth of Astro Boy", an episode which Tezuka wrote in 1975 to make the collection of stories easier to understand. The first "Astro Boy" story ever written, first published in April 1951, is in Volume 15. Tezuka often re-drew chapters he had created earlier. Schodt explains that therefore, when comparing two episodes written at the same time, one may appear "more modern" than another because Tezuka revised the art. For many of his older stories, Tezuka often added introductory pages in which he himself was portrayed as the interlocutor. The color pages of the "Astro Boy" stories were re-printed in monochrome for the inexpensive paperbackversions.

The English-language version of "Astro Boy" is an adaptation of the Akita Shoten collection. The artwork was flipped so the books would read left to right, as how the English language reads.[9] Frederik L. Schodt wrote the English-language version of "Astro Boy". For most characters, he used the original Japanese names. The story was set in Japan with Japanese characters and Schodt believed that it was necessary to retain the Japanese names whenever possible. Schodt translated the nickname "Higeoyaji" to "Mr. Mustachio," as it is a nickname. Schodt decided to use Astro Boy's English name. He explained that "Astro" is close to the Japanese name, "Atom": an English word. In addition, Schodt believed that using "Atom" in an American edition of the story would be "going against too much history." Occasionally, names of Japanese characters had double meanings that were impossible to convey in the English-language translation. Schodt decided that keeping the sound of the names was important, especially when the names were famous. In those cases, Schodt tried to use the double meaning elsewhere in the translation. When dealing with minor foreign characters with humorous-sounding names, Schodt tried to find equivalent English puns wherever he felt it was possible.

The editors of the English-language "Astro Boy" comic did not remove content that could be perceived to be racially insensitive. Some content in the "Astro Boy" series depicts foreign people, such as people from Africa and Southeast Asia. The editors of the English volumes explained that in instances the people may be portrayed differently than how they actually were in the year 2002 in real life (the year of publication of the English version). The editors added that some portrayals may show them from an era from a long time in the past, or may show them to be from very undeveloped lands. The editors said that some readers may feel that the portrayals contribute to racial discrimination, especially against people of African descent. The editors explained that while this was not Tezuka's intent, the editors believed that the issue needed to be explained and addressed as some readers may feel demeaned or insulted by the depictions. The editors expressed the belief that it would be inappropriate to revise the works. The editors explained that because Tezuka was dead, there was no way to reverse what he created, and revising his works would violate his right as a creator. The editors expressed the belief that editing or stopping publication of the work would "do little" to end racial and ethnic discrimination throughout the world