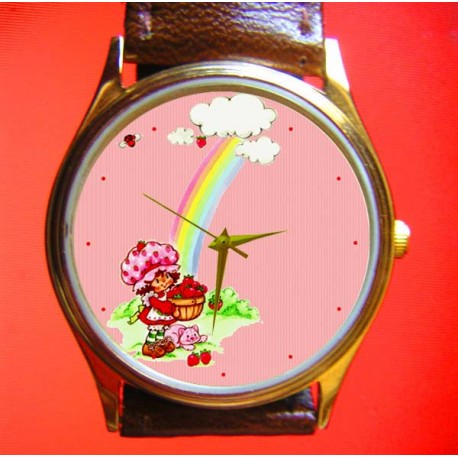 he original design of Strawberry Shortcake and her cat, Custard was done in 1977 by Muriel Fahrion during her time as a greeting card illustrator at American Greetings' Juvenile & Humorous card department. After the idea was presented to Bernie Loomis of General Mills and became a licensing entity,[citation needed] Fahrion designed a subsequent the 32 characters for Those Characters From Cleveland (American Greetings' toy & licensing design division).

Cindy Mayer Patton and Janet Jones designed the other later characters of the classic Strawberry Shortcake line. Lynn Edwards was the editor of the line and developed the personality profiles and the story line and philosophy. The first doll was a rag doll designed by Muriel Fahrion and created by Susan Trentel, Fahrion's sister.

During the 1980s, Strawberry Shortcake became a huge fad for young girls throughout the United States. At the time, there were many related products, such as sticker albums, clothing, a video game by Parker Bros. entitled Strawberry Shortcake Musical Match-Ups for the Atari 2600 [1], and numerous other products. Several TV specials were made featuring the characters, one each year between 1980 and 1985, when the fad had waned. Kenner produced no new dolls or toys thereafter.