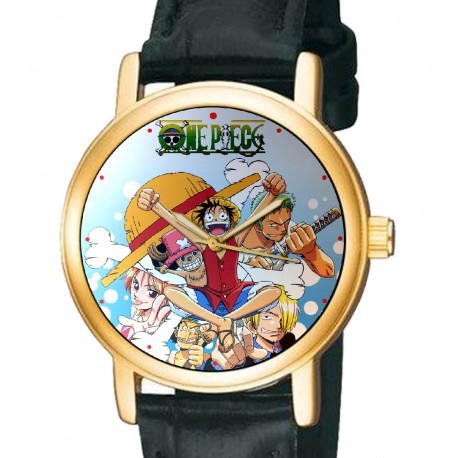 One Piece (ワンピース Wan Piisu?) is a Japanese shōnen manga series written and illustrated by Eiichiro Oda. It has been serialized in Weekly Shōnen Jump since August 4, 1997; the individual chapters are being published in tankōbon volumes by Shueisha, with the first released on December 24, 1997, and the 68th volume released as of November 2012. One Piece follows the adventures of Monkey D. Luffy, a young man whose body gains the properties of rubber after unintentionally eating a Devil's Fruit, and his diverse crew of pirates, named the Straw Hat Pirates. Luffy explores the ocean in search of the world's ultimate treasure known as One Piece in order to become the next Pirate King.

The chapters have been adapted into an original video animation (OVA) produced by Production I.G in 1998, and an anime series produced by Toei Animation, which began broadcasting in Japan in 1999. Since then, the still ongoing series has aired over 570 episodes. Additionally, Toei has developed eleven animated feature films, an OVA, and five television specials. Several companies have developed various types of merchandising such as a trading card game, and a large number of video games.

In 2008, One Piece became the highest-circulating manga series.[1] In 2010, Shueisha announced that they sold over 260 million volumes of One Piece manga so far; volume 61 set a new record for the highest initial print run of any book in Japan in history with 3.8 million copies (the previous record belonging to volume 60 with 3.4 million copies). Volume 60 was the first book to sell over two million copies in its opening week on Japan's Oricon book rankings.One Piece is currently ranked as the best-selling series of all time in manga history. It enjoys a very high readership, with more than 280 million volumes of the series sold by 2012 in Japan. One Piece has received wide critical acclaim from reviewers, primarily for its art, characterization, humor and story.

The series begins with the execution of Gol D. Roger, a man known as the King of the Pirates (海賊王 Kaizokuō?). Just before his death, Roger announces that his treasure, the One Piece (ひとつなぎの大秘宝 (ワンピース) Wan Pīsu?), will be up for the taking, causing the Great Pirate Era (大海賊時代 Dai Kaizoku Jidai?) to begin. As a result, countless pirates set out to the Grand Line to look for the treasure.

Twenty-two years have passed since Roger's execution, and Monkey D. Luffy, a young pirate inspired by Red Haired Shanks, has since set off on a journey from the East Blue Ocean to succeed Roger and find the legendary treasure. He organizes and leads a nine-member crew named the Straw Hat Pirates. Each crew member Luffy encounters eventually become his close friends, including the swordsman Roronoa Zoro, the navigator and thief Nami, the sniper Usopp, the womanizing chef and kicking expert Sanji, the doctor and anthropomorphized reindeer Tony Tony Chopper, the archaeologist Nico Robin, the cyborg shipwright Franky, and the musician skeleton Brook.

The crew crosses paths with diverse villains, such as Buggy the Clown, many of the Seven Warlords of the Sea, the Navy, who place bounties on Luffy's, Zoro's, and eventually the rest of the crew's heads, and Arlong, a fishman and member of the former Sun Pirates. They encounter Baroque Works, the crime syndicate responsible for a civil war in the desert kingdom of Alabasta, along with fellow pirate Blackbeard, whose dream is also to become the King of the Pirates. The crew also confronts Enel, the ruler of the island floating in the sky, Skypiea. Later, the crew meets the navy admiral Aokiji, who reveals that Robin was involved in searching for Poneglyphs, stones with markings left by an ancient civilization. The crew also encounters Cipher Pol No. 9, the World Government's intelligence agency responsible for the destruction of Robin's homeland, who causes the pirates to declare war on the World Government. After an epic battle at Enies Lobby, the crew defeats CP9 - saving Robin and avenging the lives lost in the destruction.

Some time later, the crew prepares to sail off to the New World, the second half of the Grand Line. The crew eventually gets separated during a battle with Bartholomew Kuma at the Sabaody Archipelago. At the same time, the Navy sentences Luffy's older brother, Portgas D. Ace, to be executed, and hold a war against a group of pirates led by the legendary pirate, "The World's Strongest Man" Whitebeard. Luffy rescues Ace, but both Whitebeard and Ace are killed in the ensuing chaos. Later, Luffy and the crew undergo rigorous training regimens, some under the tutelage of prominent figures. Two years later, the crew regroups and journeys to Fishman Island to enter the New World. At the same time, a group of evil fishman pirates appear, and holds a coup d'état to decide the fate of the island, but are eventually defeated by the Straw Hats alongside Jimbei. The Straw Hats leave Fishman Island and finally reach the New World, but not before starting a feud with one of the four major pirates in the New World, Big Mam. Their first destination in the New World is the half-burning and half-freezing island, Punk Hazard. The world of One Piece is populated by humans and numerous other races, including mermen and mermaids, "fishmen," fish-human hybrids, and giants. It is covered by two vast oceans, which are divided by a massive mountain range called the Red Line (赤い土の大陸（レッドライン） Reddo Rain?).[4] The Grand Line (偉大なる航路（グランドライン） Gurando Rain), a sea that runs perpendicular to the Red Line, further divides them into four seas: North Blue (北の海（ノースブルー） Nōsu Burū), East Blue (東の海（イーストブルー） Īsuto Burū), West Blue (西の海（ウェストブルー） Uesuto Burū) and South Blue (南の海（サウスブルー） Sausu Burū).[5] Surrounding the Grand Line are two regions called Calm Belts (凪の帯（カームベルト） kāmu beruto), which experience almost no wind and ocean currents and are breeding ground for the huge sea creatures called neptunians (海王類 kaiōrui, lit. "sea kings"). Because of this, the calm belts are very effective barriers for those trying to enter the Grand Line.[6] While marine ships, using sea-prism stone (海楼石 kairōseki) to mask their presence, can simply pass through, most have to use the canal system of Reverse Mountain (リヴァース・マウンテン Rivāsu Maunten), a mountain at the first intersection of the Grand Line and the Red Line. Sea water from each of the four seas runs up that mountain and merges at the top to flow down a fifth canal and into the first half of the Grand Line. The second half of the Grand Line, beyond the second intersection with the Red Line, is also known as the New World (新世界Shin Sekai).

The currents and weather on the Grand Line's open sea are extremely unpredictable, whereas in the vicinity of islands the climate is stable.[10] What makes it even harder to navigate is the fact that normal compasses do not work there. A special compass called a Log Pose (記録指針（ログポース） Rogu Pōsu?) must be used.[12] The Log Pose works by locking on to one island's magnetic field and then locking on to another island's magnetic field. The time for it to set depends on the island. This process can be bypassed by obtaining an Eternal Pose (永久指針（エターナルポース） Etānaru Pōsu), a Log Pose variation that is permanently set to a specific island and never changes.

The world of One Piece is filled with anachronisms, like the Transponder Snails (電伝虫 Den-Den Mushi?), snail-like animals that can be attached to electric equipment and function as rotary phones, fax machines,  surveillance cameras,  and similar devices.  Dials (貝（ダイアル） daiaru), the shells of certain sky-dwelling animals, can be used to store wind, sound, images, heat, and the like and have various applications.

A Devil Fruit (悪魔の実 Akuma no Mi) is a type of fruit which when eaten confers a power on the eater.[19] There are three categories of Devil Fruit. Zoan (動物系（ゾオン） Zoon) fruits allow the user to fully and partially transform into a specific animal. Logia (自然系（ロギア） Rogia) fruits give control over and allow the user "to change their living body structure into the powers of nature". Paramecia (超人系（パラミシア） Paramishia) is a catch-all category for fruits that give the user superhuman abilities. They are said to be incarnations of the Sea Devil himself, and as a result, Devil Fruit users cannot swim in sea water, as "they are hated by the sea".When even partially submerged in sea water, they lose all of their strength and coordination, although some abilities remain, such as Luffy still being able to stretch after being totally submerged. "Moving" water, such as rain or waves, does not have this effect.

Haki (覇気?, lit. "Ambition") is a latent ability every living being in the world of One Piece possesses, though it is quiescent in most. It comes in three varieties: Color of Observation Haki (見聞色の覇気 Kenbunshoku no Haki) allows to sense the presence of other beings and predict their movement. Color of Armamemnt (武装色の覇気 Busōshoku no Haki) allows one to envelop body parts and even inanimate forms with a force akin to an invisible armor that possesses defensive/offensive properties. The rare Color of the Conqueror/King (覇王色の覇気 Haōshoku no Haki) enables one to intimidate or render beings of weak determination unconscious.