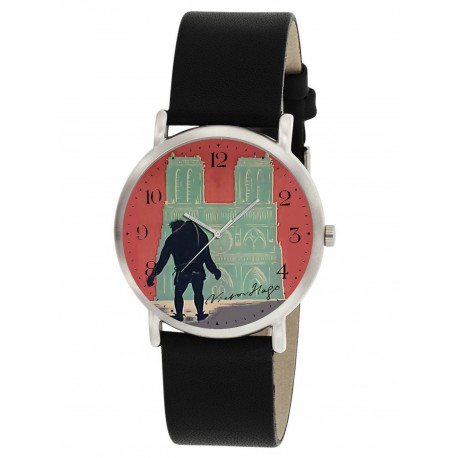 The novel has been described as a key text in French literature[1] and has been adapted for film over a dozen times, as well as numerous television and stage adaptations, such as a 1923 silent film with Lon Chaney, a 1939 sound film with Charles Laughton, and a 1996 Disney animated film.

The novel sought to preserve values of French culture in a time period of great change, the French Revolution which resulted in the destruction of many French Gothic cathedrals and churches threatened to trivialise the vibrancy of 15th century France. The novel made Notre-Dame De Paris a national icon and served as a catalyst into a renewed interest in the restoration of Gothic form.

The novel's original French title, Notre-Dame de Paris, refers to Notre Dame Cathedral, on which the story is centered. Frederic Shoberl's 1833 English translation was published as The Hunchback of Notre Dame (which became the generally used title in English), which refers to Quasimodo, Notre Dame's bellringer. 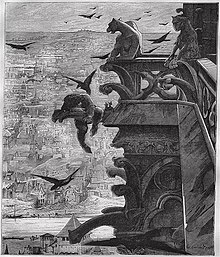 Victor Hugo began writing Notre-Dame de Paris in 1829, largely to make his contemporaries more aware of the value of the Gothic architecture, which was neglected and often destroyed to be replaced by new buildings or defaced by replacement of parts of buildings in a newer style. For instance, the medieval stained glass panels of Notre-Dame de Paris had been replaced by white glass to let more light into the church.[3] This explains the large descriptive sections of the book, which far exceed the requirements of the story. A few years earlier, Hugo had already published a paper entitled Guerre aux Démolisseurs (War to the Demolishers) specifically aimed at saving Paris' medieval architecture.[4] The agreement with his original publisher, Gosselin, was that the book would be finished that same year, but Hugo was constantly delayed due to the demands of other projects. In the summer of 1830, Gosselin demanded that Hugo complete the book by February 1831. Beginning in September 1830, Hugo worked nonstop on the project thereafter.

The story is set in Paris in 1482 during the reign of Louis XI. The gypsy Esmeralda (born as Agnes) captures the hearts of many men, including those of Captain Phoebus and Pierre Gringoire, but especially Quasimodo and his guardian Archdeacon Claude Frollo. Frollo is torn between his obsessive lust for Esmeralda and the rules of Notre Dame Cathedral. He orders Quasimodo to kidnap her, but Quasimodo is captured by Phoebus and his guards, who save Esmeralda. Gringoire, who attempted to help Esmeralda but was knocked out by Quasimodo, is about to be hanged by beggars when Esmeralda saves him by agreeing to marry him for four years.

The following day, Quasimodo is sentenced to be flogged and turned on the pillory for two hours, followed by another hour's public exposure. He calls for water. Esmeralda, seeing his thirst, approaches the public stocks and offers him a drink of water. It saves him, and she captures his heart.

Later, Esmeralda is arrested and charged with the attempted murder of Phoebus, whom Frollo actually attempted to kill in jealousy after seeing him trying to seduce Esmeralda. She is sentenced to death by hanging. As she is being led to the gallows, Quasimodo swings down by the bell rope of Notre-Dame and carries her off to the cathedral, temporarily protecting her – under the law of sanctuary – from arrest.

Frollo later informs Gringoire that the Court of Parlement has voted to remove Esmeralda's right to the sanctuary so she can no longer seek shelter in the cathedral and will be taken away to be killed. Clopin, the leader of the gypsies, hears the news from Gringoire and rallies the citizens of Paris to charge the cathedral and rescue Esmeralda.

When Quasimodo sees the gypsies, he assumes they are there to hurt Esmeralda, so he drives them off. Likewise, he thinks the king's men want to rescue her, and tries to help them find her. She is rescued by Frollo and Gringoire. But after yet another failed attempt to win her love, Frollo betrays Esmeralda by handing her to the troops and watches while she is being hanged. When Frollo laughs during Esmeralda's hanging, Quasimodo pushes him from the height of Notre Dame to his death. With nothing left to live for, Quasimodo vanishes and is never seen again.

In the original, Quasimodo's skeleton is found many years later in the charnel house, a mass grave into which the bodies of the destitute and of criminals were indiscriminately thrown, implying that Quasimodo had sought Esmeralda among the decaying corpses and lay beside her, himself to die. As the guards attempt to pull the embracing skeletons apart, they both crumble into dust.