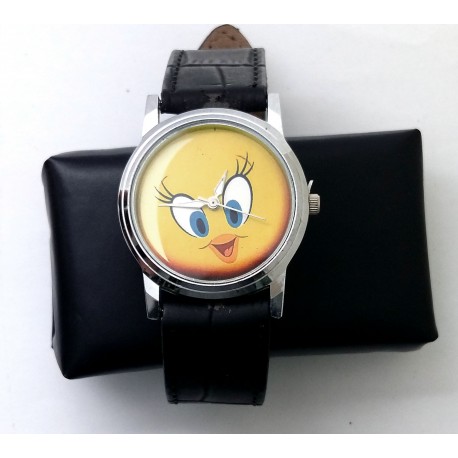 Tweety Bird (also known as Tweety Pie or simply Tweety) is a fictional Yellow Canary in the Warner Bros. Looney Tunes and Merrie Melodies series of animated cartoons. The name "Tweety" is a play on words, as it originally meant "sweetie", along with "tweet" being a typical English onomatopoeia for the sounds of birds. His characteristics are based on Red Skelton famous "Mean Widdle Kid". Tweety appeared in 49 cartoons in the Golden Age.

Despite the perceptions that people may hold, owing to the long lashes and high pitched voice of Tweety, Tweety is male.[citation needed] This was established several times in the series "Sylvester and Tweety Mysteries". It was also confirmed toward the end of Snow Business when Granny exclaimed to Tweety and Sylvester, "Here I am, boys!" On the other hand, a 1951 episode was entitled "Ain't She Tweet". Also, his species is ambiguous; although originally and often portrayed as a young canary, he is also frequently called a rare and valuable "tweety bird" as a plot device, and once called "the only living specimen". Nevertheless, the title song directly states that the bird is a canary. His shape more closely suggests that of a baby bird, which in fact is what he was during his early appearances (although the "baby bird" aspect has been used in a few later cartoons as a plot device). The yellow feathers were added but otherwise he retained the baby-bird shape.

In his early appearances in Bob Clampett cartoons, Tweety is a very aggressive character who tries anything to foil his foe, even kicking his enemy when he is down. Tweety was toned down when Friz Freleng started directing the series into a more cutesy bird, and even more when Granny was introduced, however sometimes Tweety still kept his malicious side. One of his most notable "malicious" moments is in the cartoon Birdy and the Beast; when a cat tries to chase Tweety by flying and falls after remembering that cats cannot fly, Tweety says sympathetically, "Awww, the poor kitty cat! He faw down and go (in a loud, tough, masculine voice) BOOM!!", after which he grins mischievously. A similar gag was used in A Tale Of Two Kitties when Tweety, wearing an air raid warden's helmet, suddenly yells out in that same voice: "Turn out those lights!"