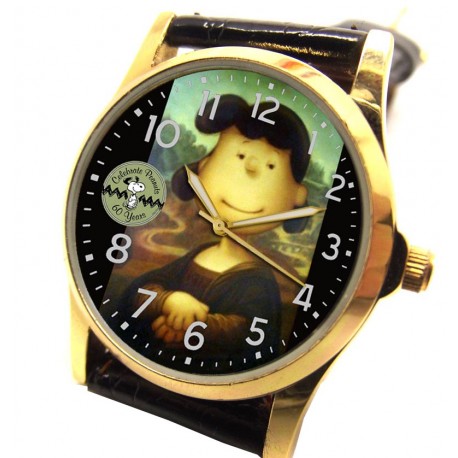 Lucille "Lucy" van Pelt is a fictional character in the syndicated comic strip Peanuts, written and drawn by Charles Schulz. As a character, she is the older sister of Linus and Rerun; she is depicted as the strip's antagonist and bully. Her traits are implicitly explained by her underlying character, that of a crabby and cynical eight-year-old girl; she often bullies the other characters in the strip, particularly Linus and Charlie Brown.[3] She is often referred to as the world's greatest fussbudget, mostly by her mother.

Lucy was drawn into the "Peanuts" strip on March 3, 1952, as a wide-eyed baby who constantly tormented her parents. Very early on, Schulz eliminated the circles around her eyes and allowed her to mature to the age of the other characters; she does have tiny half circles around her eyes (as do the other van Pelt siblings). She soon grew into her familiar persona of a bossy, crabby, manipulative and selfish girl.

Lucy wore a blue dress with white and black saddle shoes for most of the strip's original run. However, in later years, towards its end, she was seen more often in T-shirts and pants, until her dress was phased out altogether.

Perhaps Lucy's most famous gimmick in her long existence as a character is the one in which she pulls the football away from Charlie Brown right as he is about to kick it.[7][8][9] The first occasion on which she did this was November 16, 1952 (Violet unintentionally did the same thing a year before because she was afraid Charlie Brown would accidentally kick her), but unlike subsequent stunts, Lucy first pulled the ball away because she did not want Charlie Brown to get it dirty (he took a second try in the same strip, only to trip over it at the end). Afterward, every year in the fall Lucy would somehow manipulate Charlie Brown into trying again, only to pull the ball away to trick him. The most infamous example of this is the animated special It's Your First Kiss, Charlie Brown, where her actions (she pulled the ball away four times) cost the school football team a win in the Homecoming game, yet Charlie Brown is blamed even though he is clearly not at fault.

For all her crabbiness and bad temper, Lucy does have a vulnerable side: she is in love (and sometimes infatuated) with Schroeder, but he does not return her affections. In this Lucy is seen as vulnerable, as she shows a need for assurance from either Schroeder or Charlie Brown that she is indeed pretty (often asking them their opinion of her appearance), and is known to react harshly whenever their reaction is unfavorable, or even hesitant.[6] Indeed, for all her callousness, Lucy seems to be rather thin-skinned when she is on the receiving end of an insult. In one example, when Linus countered her statement that he was a terrible brother by saying that she was not such a great sister either, Lucy burst into tears. Another time, her reaction to Charlie Brown's telling her she was not perfect was to wordlessly storm off in anger, leaving Charlie to comment, "I've never seen anyone so insulted!"

Lucy's faults are depicted as being balanced by obvious intelligence, albeit often used for selfish or self-aggrandizing purposes. In a long-running gag first drawn in 1959, she presents herself to other members of the "Peanuts" universe as a professional psychiatrist. She dispenses therapy from a booth, drawn to look somewhat similar to a stereotypical children's lemonade stand, for 5¢ per consultation. Readers do not get an explanation as to how Lucy escapes the usual penalties for practicing medicine without a license.