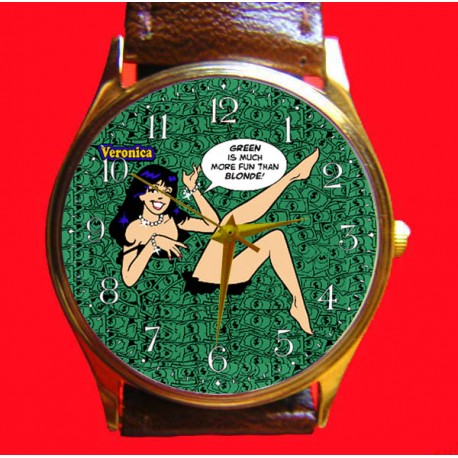 She is called both by her name Veronica and her nickname Ronnie. Bob Montana, creator of the original Archie characters, knew the Lodges, because he had once painted a mural for them. Montana combined that name with actress Veronica Lake to create the character of Veronica Lodge. Her character was added just months after Archie Andrews, Betty Cooper, Reggie Mantle and Jughead Jones debuted.

Veronica is the only child of Hiram Lodge, the richest man in Riverdale, and his wife Hermione Lodge. She is tall, slender and attractive with long black hair. Veronica favors expensive, up-to-the-minute fashion. In some comics, Mr. Lodge claimed that he moved his family to Riverdale in order to avoid Veronica becoming spoiled, like many of the children he knew and grew up with. His plan did not succeed as well as he had hoped. Veronica is often seen going on spending sprees and pretty much shopping until she drops and burning major credit cards in the process. (Once she bought out an entire shoe store to prevent any other girl from buying a pair of shoes that she herself wanted!) At times, Veronica's vain and conceited attitude infuriates her father to the point that he has to somehow "teach her a lesson" and Veronica is forced to get a job of some kind or loses access to Archie.

In the earliest Archie Comics, Archie wrote to her asking her to a dance in Riverdale. He accidentally sent the letter; he really wanted to ask Betty Cooper, and was only daydreaming. Even after he realized he had sent the letter, he did not think she would really come. Veronica accepted the invitation, thinking that a dance would be fun. At the time, she lived in a much bigger city and begged her parents to go. Archie struggled trying to keep his dates with both girls, thus beginning theirlove triangle.

Veronica enjoys a very posh lifestyle, as her family is among the richest people in the world. She nevertheless chooses to hang out with her less affluent friends, in part to try to win the love of Reggie Mantle, whom she nicknames "Reggiekins". Her level of interest in him varies, however. Mr. Lodge often has nightmares that Veronica and Reggie will marry. In 2009, Archie Comics published a storyline that followed this possible future.

Veronica's best friend (and sometimes arch-rival) is Betty Cooper, and the two enjoy countless activities and interests. However, they are also at constant competition for Reggie's affections. Her other friends include Ethel Muggs, Midge Klumpand Nancy Woods, and they all enjoy having slumber parties and shopping at the mall together. Aside from Reggie, Veronica frequently dates Archie Andrews, who has the wealth and possessions her father appreciates, as well as a narcissismthat rivals hers.

Periodically, she can be extremely snobbish, and she will look down on those less fortunate than herself, or sees herself as the rules of common society don't apply to her, which causes her friends to be upset with her. During those times, she derisively refers to the public at large as "the common horde".

In a five part story, she openly sides with Archie, and (at least in this story) acts as thoroughly obnoxious as he. He began with framing Reggie for breakage at her home; also causing some messes at school, all the while, framing Reggie for the damage. One prank led to a tussle with Betty Cooper, who thrashed him for beating her up (she was helping Reggie with cleaning a store room, and Archie mistook her for Reggie) which led Veronica to scold Betty for being unladylike and nearly ruining "Archie's aristocratic profile". The prank war ultimately was topped off with Archie dressing as Dracula and trying to scare his rival. Eventually, she finally realized that Archie was going way too far and berated herself for having supported him. Reggie eventually wound up getting the last laugh when Jughead takes the rotor out of Archie's car, which stranded the two troublemakers. However, a couple of policemen found them, and as Archie was in his Dracula costume, this led to Veronica and Archie getting teased. Veronica was so embarrassed with this that when one of the policemen asked her, "Hey, lady, do you have punctures in your neck?", she replied in an angry and humiliated tone, "No, but I have a big hole in my head!"

Though a girl as popular as Veronica can have her choice of dates, she will drop any boy, including Archie, if she sees Betty with Moose. Veronica is often seen scheming to get Archie from Betty whenever she spots the two dating. Usually she is victorious, but occasionally Betty manages to successfully take revenge on her. Also, Reggie occasionally has stood up to Veronica and stuck with Betty.

Her relationship with Jughead Jones is less friendly. They constantly argue and are critical of each other's lifestyles. She cannot stand his laid-back attitude and witticisms, and he considers her an uncaring snob and enjoys arousing her temper. However, they usually manage to stand being around each other for Archie's sake.

Veronica's cousin, Leroy, in Elementary School, has a mean-spirited, juvenile delinquent-like personality. When Leroy visits, he antagonizes Archie even more than Reggie does. Veronica also has a cousin named Marcy, aged 14, who enjoys science fiction and other things that Veronica finds "geeky", so Veronica considers her annoying. Most of the time, however, Marcy is helpful to Veronica, who discovers that her cousin isn't so geeky after all.

Sometimes good-hearted, sometimes spoiled and vain, the fashion-conscious Lodge stars the Archie spin-offs Betty And Veronica Magazine and Betty and Veronica Spectacular, as well as her own title, Veronica. Her foibles are commonly featured in stories. When upset, she has a furious temper, which it is unwise to arouse. She is an impulsive shopper who cannot go long without buying clothes, and is often addicted to gossip, which sometimes angers Betty. Though commonly a cheerleader, her sports abilities vary from superior to nonexistent, and she lacks domestic talents and many other skills that Betty has mastered. In fact, her cooking skills are so notoriously poor that the other characters literally fear for their lives when she tries to prepare a meal. Veronica is a scuba diver, wearing a red shorty wetsuit, breathing with a scuba tank she carries on her back, and wears red fins on her feet, but swims underwater. Several stories also portray Veronica as an expert at billiards, the reason being that her family owns a pool table, and she's been playing since she was a child.

At various times, she will take an ordinarily common situation (for example being Most Popular in the yearbook) and make it into a full blown out situation aimed at increasing her ego, or to shame or humiliate her target (most often that target being Betty).

In the aforementioned Most Popular storyline (shown in Betty and Veronica Double Digest #180, the story being called, "Buddy, Can You Spare a Buddy?"), she pulls out all the stops to outdo Betty, even going so far as to try to buy off the students; throwing mud at her, which was misaimed at Mr. Weatherbee, who gives her a week's detention, and outright slandering and lying about Betty with Reggie's aid (she bought him a car he wanted as a bribe for him to vote her most popular). At one point, she even hires a trio called Dewey Trashem and Howe, in an attempt to destroy Betty's character. In the end, Betty pulls her name out of consideration for Most Popular as she saw the situation having gone way too far; and Veronica losing to Ethel Muggs, the person she scorned in the first part of the story. Infuriated (she only got one vote, her own!) she ordered a tow truck to drive Reggie's car, with Reggie trussed up in it, to the dump.

A similar situation involved her wanting to be Homecoming Queen. In Betty and Veronica Double digest #185, (the story being called Crowning Achievement) She declares that she will be Homecoming Queen, her reason being that because she is wealthy, she should be treated as royalty. She went so far as to get a custom made $500 gown in the school's colors to show the town that she was worthy of being the queen. She spurns any attempts to help her friends to build the float and decorate the gym, except in annoying everyone with ridiculous suggestions to build herself up and make herself the star, to the exclusion of everyone else. Her overbearing snobby behavior outrages her friends. When the votes were finally cast, it was Betty, who practically did more than her fair share in decorating and building, who won the vote and was named Queen. Once again, angry that she didn't get what she thought she deserved, Veronica smashed the queen's crown on Archie and then promptly stormed off.

Her best school subject is economics, and it is implied that she will eventually take over her father's business. She also takes every chance to work as a fashion model. By the 1960s, Betty and Veronica, joined Archie's band, The Archies. Betty plays the tambourine, Veronica plays theorgan, and both sing accompaniment. In the 2000s, Veronica appeared a few times as Powerteen — a comic book character created by Chuck Clayton. She also enjoys traveling to exotic places, which was the basis for Veronica's Passport.