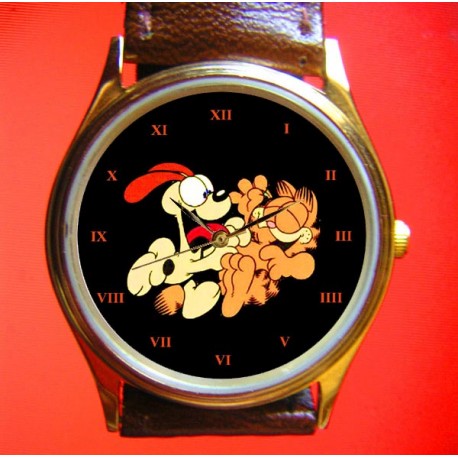 Garfield is an orange, fuzzy, tabby cat born in the kitchen of an Italian restaurant (later revealed in the television special Garfield: His 9 Lives to be Mama Leoni's Italian Restaurant) and immediately ate all the pasta and lasagna in sight, thus developing his love and obsession for lasagna and pizza. Gags in the strips commonly deal with Garfield's obesity (in one strip, Jon jokes, "I wouldn't say Garfield is fat, but the last time he got on a Ferris wheel, the two guys on top starved to death"), and his hatred of any form of exertion or work. He is known for saying "breathing is exercise". In addition to being portrayed as lazy and fat, Garfield is also pessimistic, sadistic, cynical, sarcastic, sardonic and a bit obnoxious. He enjoys destroying things, mauling the mailman, tormenting Odie, kicking Odie off the table; he also makes snide comments, usually about Jon's inability to get a date (in one strip, when Jon bemoans the fact that no one will go out with him on New Year's, Garfield replies, "Don't feel bad Jon. They wouldn't go out with you even if it weren't New Year's"). Though Garfield can be very cynical, he does have a soft side for his teddy bear, Pooky, food and sleep, but one Christmas he says "they say I have to get up early, be nice to people, skip breakfast...I wish it would never end." It has been wondered by many readers if Garfield can actually be understood by the non animal characters around him. Sometimes it seems like Jon can hear him. However, it is mentioned in more than one strip that Jon cannot understand Garfield.