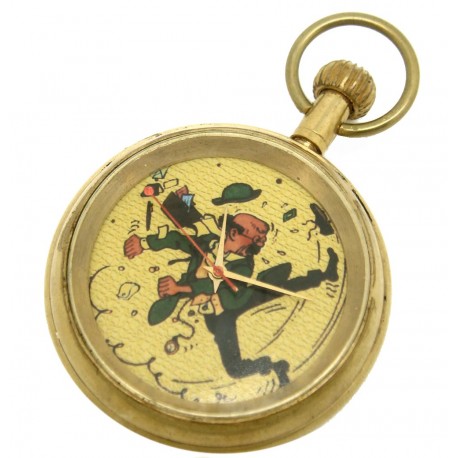 Calculus is a genius, who demonstrates himself throughout the series to be an expert in many fields of science, holding three PhDs in nuclear and theoretical physics, planetary astronomy and calculus. He is also an experienced engineer,archaeologist, biologist and chemist. Many of his inventions precede or mirror similar technological developments in the real world (most notably the Moon rocket, but also his failed attempt at creating a colour television set). He seeks to benefit mankind through his inventions, developing a pill that cures alcoholism by making alcohol unpalatable to the patient, and refusing under great duress to yield his talents to producing weapons of mass destruction. Much of Calculus's more dangerous work is criticized by Captain Haddock, although Calculus usually interprets this the other way round: his deafness often leads him to misinterpret Haddock's words, preventing him from hearing his real opinion.

Calculus's deafness is a frequent source of humour in his interactions with other people, as he often repeats back what he thinks he has heard, usually in the most unlikely words possible. Additionally, he often diverts the subject of a conversation by responding to a misinterpreted remark. For example, "But I never knew you had..." leads Calculus to respond "No, young man, I am not mad!". In the same book he believes that Tintin and Haddock are talking about his sister, before remembering a few moments later that he does not have a sister. He is not perturbed by his handicap, even if it is a source of deep frustration to his friends. He himself does not admit to being near-deaf and insists that he is "only a little hard of hearing in one ear."

In the course of the Moon books, however, Calculus leads a team of scientists and engineers working on a major rocket project, motivating him to adopt an ear trumpet, and later a hearing aid, and for the duration of the adventure he has near-perfect hearing. This made him a more serious character, even displaying leadership qualities which had not been shown before or since. However, after completing the journey to the Moon, Calculus discarded his hearing aid, forcing his friends to readjust to his hearing impairment (aside from one panel in The Castafiore Emerald, when Tintin is seen speaking to him through his ear-trumpet); this restored the humour surrounding him, though it could be that he finds his deafness useful since it enables him to focus on his work.

Calculus maintains a laboratory at Marlinspike Hall, in which he conducts various experiments. He is fairly protective of his work, on occasion hiding his scientific endeavours from Tintin and Haddock (which gets him into trouble in The Calculus Affair). His lab is also stripped of all its apparatus in the same book. On an earlier occasion, during his efforts to find an antidote to Formula Fourteen in Land of Black Gold, Calculus almost destroyed half of Marlinspike in an explosion.

Although generally a mild-mannered (if somewhat oblivious) figure, Calculus flies into an uncharacteristic rage if he feels insulted or ridiculed. He is especially provoked if he ever hears Haddock (or anyone else) call him a "goat". On one famous occasion in Destination Moon, he displays uncontrollable ire ("Goat, am I?") when an irritated Haddock accuses him of "acting the goat" ("acting like a goat" in the Golden Press American English translation) by attempting to build a Moon rocket. His subsequent tirade and blatant disregard for security terrifies the usually ebullient Captain; he even lifts the director of security barring his way onto a coat hook. Another occasion is in Flight 714 when, due to some misunderstanding, he physically assaults Laszlo Carreidas and has to be held back with great effort by Haddock and Tintin. In the same book, despite his deafness, he hears Captain Haddock tell him that he's "acting the goat", but Haddock quickly prevents the severe reaction from occurring quickly. Despite his gentle nature, Calculus is rather sensitive about his work and does not appreciate being ridiculed or belittled for his scientific efforts.

In spite of all this, his friends stick by him come what may. Haddock invited him to stay at Marlinspike Hall after Calculus discovered it is the captain's ancestral home and bought it in his name thanks to money he had earned through selling the patent for his shark-submarine. He did this because Haddock and Tintin had provided him with the opportunity to test the submersible when they were searching for Red Rackham's Treasure. Tintin and Haddock crossed the world on at least two occasions (Prisoners of the Sun and The Calculus Affair) in order to save him from kidnappers.

He occasionally comments that he was a great sportsman in his youth, with a very athletic lifestyle. He is a former practitioner of the French martial art savate, although a demonstration in Flight 714 shows him to be a bit rusty. Calculus is partly modeled on inventor Auguste Piccard (1884–1962), Hergé stated in an interview with Numa Sadoul: "Calculus is a reduced scale Piccard, as the real chap was very tall. He had an interminable neck that sprouted from a collar that was much too large... I made Calculus a mini-Piccard, otherwise I would have had to enlarge the frames of the cartoon strip." The Swiss physics professor held a teaching appointment in Brussels when Hergé spotted his unmistakable figure in the street. In The Castafiore Emerald, Bianca Castafiore mentions that Calculus is "famous for his balloon ascensions", an ironic reference to Piccard.

Tintinologist Philippe Goddin has suggested that Calculus' deafness was inspired by Paul Eydt, whom Hergé had known at Le Vingtième Siècle where Tintin's adventures had first appeared.[2] Cuthbert Calculus' original French name is "Tryphon Tournesol" and Tryphon was the name of Hergé's plumber.[2]

In contrast to his unquestionable scientific merits, Calculus is a fervent believer in dowsing, and carries a pendulum for that purpose. Hergé himself was a believer in the subject: dowser Victor Mertens had used a pendulum to find the lost wedding ring of Hergé's wife in October 1939.