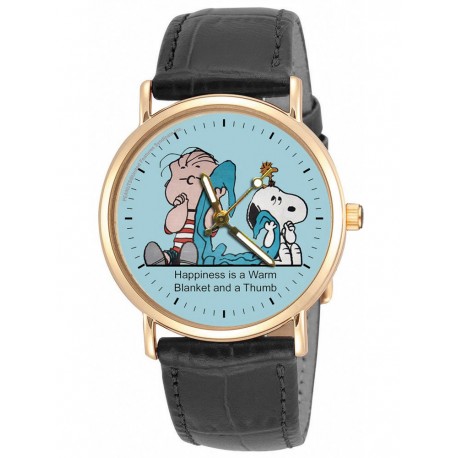 Linus van Pelt is a character in Charles M. Schulz's comic strip Peanuts. The best friend of Charlie Brown, Linus is also the younger brother of Lucy van Pelt and older brother of Rerun van Pelt. He first appeared on September 19, 1952; however, he was not mentioned by name until three days later. He was first referenced two months earlier, on July 14. Linus spoke his first words in 1954, the same year he was shown with his security blanket.

Though young, Linus is unusually smart, and he acts as the strip's philosopher and theologian, often quoting the Gospels. He invented his own legendary being, the Great Pumpkin, who, Linus claims, appears every Halloween at the most "sincere" pumpkin patch, bearing gifts. Linus is the only one who believes in the Great Pumpkin, although he occasionally temporarily convinces other characters the Great Pumpkin is real, only to stubbornly maintain his faith when they lose theirs. On one occasion, Linus had a commanding lead in the polls for school president—until he brought out his favorite subject of the "Great Pumpkin," at which point he was nearly laughed out of the election. (He ended up winning anyway by one vote, cast by his opponent, who decided that Linus would make a better school president.) A similar occurrence was featured in a strip with the same storyline, except Charlie Brown asks him why he had to bring up the Great Pumpkin and Linus gave his reasons. After saying that Charlie Brown was looking at him as if he was crazy, Charlie Brown responded, "I'm looking at you like I could've been vice president!" Despite Linus' intelligence and mature vocabulary, juvenile aspects of his character are also displayed for example Linus is almost always depicted holding his blue blanket --- for which he is often the subject of mockery from other characters --- and often sucking his thumb.

Linus has brown hair and he normally wears a red shirt with stripes on it, black shorts, and tennis shoes. On February 5, 1962, Linus began wearing eyeglasses after being diagnosed with myopia. However, after September 9, 1962, his glasses inexplicably disappeared from the strip.

Linus is almost never without his blue blanket, which debuted in the June 1, 1954, strip. He holds the blanket over his shoulder while sucking his thumb. Ridicule of the habit is not a major concern for him as shown when one friend, Roy, warned him at summer camp that he would be viciously teased for it. In response, Linus uses his blanket like a whip and shears off a tree branch with intimidating power and notes: "They never tease me more than once." The blanket, it turns out, is an autonomous (although non-verbal) entity. In a 1965 strip, it engaged in a campaign of clandestine attacks on Lucy, even routing her from the house, due to her constant, albeit failed, attempts to get rid of it by throwing it in the trash burner. In the special A Boy Named Charlie Brown, it also performed a complex dance routine with Linus upon being reunited with its owner.

In the earlier strips, Linus's relationship to his blanket was one of intense emotional attachment to the point of manifesting physical symptoms if deprived of it even for a short while. He suffered weakness and dizziness, for example, when Lucy took it from him only long enough to have it laundered, spontaneously recovering when it was restored to him. In the aforementioned "A Boy Named Charlie Brown," Linus manifested similar symptoms when he had given his blanket to Charlie Brown. On another occasion, Lucy snatched his blanket away and buried it in an effort to break Linus of his habit. Linus literally dug up the neighborhood for days trying to find it-until Snoopy dug it up. Lucy won a first prize in a school science contest when she took Linus' blanket away and recorded his "withdrawal symptoms"—and as proof, she entered Linus and his blanket as an exhibit!

Possession of the blanket is often sought by Snoopy, who has used many tricks and subterfuges to relieve Linus of it, even at one point having the blanket delivered to his doghouse. A common thing for Snoopy is to run up and quickly grab the blanket in his mouth and drag Linus along with it, then swing him and the blanket around many times before letting go and sending them both soaring off to who-knows-where. In another instance, Linus was so angry at Snoopy for snatching his blanket again and again that he retaliated by threatening Snoopy's supper dish. Upon hearing that Linus had possession of his most prized possession, Snoopy gave Linus back the blanket fairly quickly, thinking, "I never dreamed he would fight so dirty!". When Lucy buried the blanket, Snoopy took the time to dig for it himself; and when he found it, Linus thanked him, upon which Snoopy thought "Every now and then I feel that my existence is justified!" In the special Snoopy Come Home, Snoopy and Linus engaged in an exchange of increasingly violent assaults upon one another to gain possession of the blanket.

Furthermore, there are many stories where Lucy and Linus's grandmother attempts to force him to give up the blanket, only to eventually concede in the face of his steadfast resistance. Two attempts were when the grandmother in question gave up smoking, and when she offered that if he gave up the blanket she would donate ten dollars to his favorite charity. The deal wasn't made because it wasn't a fair proposition.

The April 11, 1983, strip shows Linus saying that he had given up his blanket,[6] and later going from door to door, telling people how he gave up his blanket. Once, this resulted in the girl at the door lashing him with her blanket, in her anger. Twice before Linus actually vows to give up his blanket-once he threw it away but grabbed it back; another time he was about to tell Charlie Brown about his new resolution when Charlie Brown ruined everything by tossing a blanket onto Linus.

In one particularly angry confrontation over the issue (the aforementioned blanket-for-smoking episode) Linus admitted that if his mother ordered him to stop, he would comply; but no one else, especially Lucy or the "blanket-hating" grandmother, would have that authority. In fact, in that confrontation, when Lucy decided that he'd gone without the blanket for two weeks and that he no longer needed it, she decided to throw it into the trash burner; Linus, however, was able to intervene at the last second and retrieve his blanket. Never objecting, the mother was evidently content to let her unusually intelligent son grow out of the habit on his own. In later strips, Linus is shown with it less and less, and Charles Schulz admitted in 1989 that Linus had finally outgrown the blanket, and it was only in the strip when required for the humor. In one comic, Linus suddenly stops sucking his thumb and says "It's a good thumb, but not a great thumb." The special Why, Charlie Brown, Why?, released the following year, is the only one where Linus is never seen with his blanket, nor is even mentioned, arguably to make Linus appear more mature given the serious subject of the special. Eventually, however, he is reunited with it, and was seen with it, although not every time, many times, and a confrontation with Snoopy was included mostly in each strip.

Upon the introduction of Charlie Brown's little sister, Sally Brown, into the strip in 1959, Linus had the desire to marry her. However, as the strip progressed, he outgrew this idea, while Sally on the other hand fell in love with Linus, calling him her "Sweet Babboo", much to his displeasure. Linus in turn has an innocent crush on his school teacher, Miss Othmar (later Mrs. Hagemeyer). In some of the later '90s strips he developed an interest in Lydia, the girl who sits behind him, who keeps changing her name and, as Linus is two months older than she, asks him, "Aren't you kind of old for me?" (This is a subtle reference to cartoonist Schulz and his own second wife, who was some twenty years younger than he.) It was also Linus who first introduced Frieda, as "...a sort of a friend of mine" who sat behind him in school. He also fell for several different girls in various animated television specials, as well as a girl called Truffles, whom he and Snoopy met while looking for the fungi bearing her name. Linus looks for opening to knock out Lucy in a boxing match, but... ...Linus loses when Lucy lands the knockout punch instead.

Linus meekly submits to domination by his older sister Lucy, who has been known to attack him at the drop of a hat. Linus did finally challenge her to a fight when he thought he could beat her in a boxing match, only to get knocked out.

However, Linus often defuses Lucy's temper through passive resistance and clever use of his intellect, either logically talking Lucy out of hitting him or confusing her into submission. Later in the strip, the pair got a younger brother, Rerun, who looks nearly identical to Linus, though smaller. Coincidentally, this occurred at the same time Lucy kicked Linus out of the house, leading her to cry "A new baby brother? But I just got rid of the old one!"