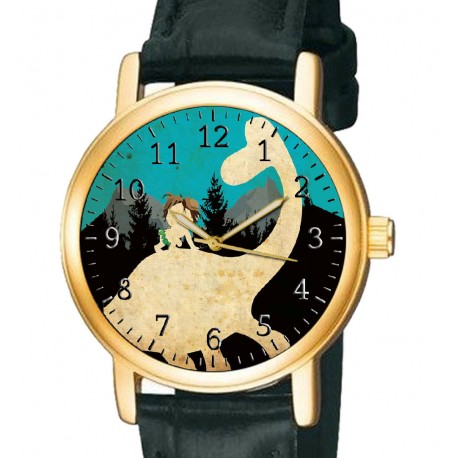 The Good Dinosaur is a 2015 American 3D computer-animated drama adventure film[9] produced by Pixar Animation Studios and released by Walt Disney Pictures. The film is directed by Peter Sohn in his directorial debut from a screenplay by Meg LeFauve from an original idea by Bob Peterson. Set on a fictional Earth in which dinosaurs never became extinct, the film follows a young Apatosaurus named Arlo, who meets an unlikely human friend while traveling through a harsh and mysterious landscape. The film features the voices of Raymond Ochoa, Jack Bright, Sam Elliott, Anna Paquin, A.J. Buckley, Steve Zahn, Jeffrey Wright, and Frances McDormand.

Peterson, who came up with the idea for the story, directed the film until August 2013. In October 2014, Sohn was announced as the new director. The film, along with Inside Out, marks the first time that Pixar has released two feature films in the same year.

The Good Dinosaur premiered on November 10, 2015 in Paris. It was released in the United States on November 25, 2015, and received positive reviews from critics.

In an alternate universe, the asteroid that would have caused the extinction of the dinosaurs 65 million years ago passes safely over Earth.

65 million years later, Apatosaurus farmers Henry and Ida have children Libby, Buck, and the runt Arlo, who has trouble adjusting to farm life. While his successful siblings are allowed to "make their mark" (a mud-print on the family's corn silo), Arlo's timid nature makes tasks difficult for him. Henry attempts to give Arlo a sense of purpose by putting him in charge of guarding their silo, and helps him set a trap. It captures a feral caveboy, but Arlo doesn't have the heart to kill him, and sets him free. Disappointed, Henry takes Arlo to track the caveboy, leading them into a ravine. Henry saves Arlo from a flash flood before being swept away and killed.

Without his father, Arlo shoulders more of the workload. He spots the same caveboy inside the silo and, blaming him for his father's death, chases him until both fall into a river. Arlo cannot swim, and is swept downstream where he hits his head on a rock and is knocked unconscious. Awakening, he finds himself far from home and tries to survive on his own, but becomes trapped when a boulder pins his leg. The next day Arlo wakes to find his leg has been freed, and the caveboy appears with food for him. The caveboy then leads Arlo to a berry tree, where the caveboy fends off a large snake, amazing Arlo and impressing a nearby eccentric Styracosaurus who wants to keep the boy. He forces Arlo to compete with him to give the boy a name he will respond to, which Arlo finally wins when he calls him "Spot". Arlo and Spot bond as Arlo laments his lost family, and Spot reveals that his own parents are dead. Later, when a thunderstorm strikes, Arlo runs away in fear and loses the riverbank he has been following home.

The next morning, Arlo wakes to find Spot at his side. They are noticed by a band of pterodactyls who appear to be conducting a rescue operation but turn out to be savagely carnivorous. When the pterodactyls try to take Spot, Arlo and Spot flee, happening upon a pair of Tyrannosaurus named Nash and Ramsey, who ward off the pterodactyls. Nash, Ramsey, and their father Butch have lost their herd of Longhorns, so Arlo offers Spot's help in sniffing them out. They locate the herd, but Butch recognizes the work of cattle rustlers, and uses Arlo as a lure. Arlo and Spot attract the attention of rustlerVelociraptors, allowing Butch and his family to attack. During the fight, Arlo musters his courage and fends off two raptors who have overwhelmed Butch, helping to turn the fight in their favor. Having gained their respect, Arlo joins the T. Rexes in driving the cattle south when he sees the familiar mountain peaks of his homeland in the distance, and leaves with Spot to return home. Along the way, they encounter an adult feral caveman in the distance, and though Spot shows interest, Arlo dissuades him and they continue on.

As another storm approaches, the pterodactyls return and attack and carry Spot away. Arlo becomes entangled in vines, where he has a vision of Henry leading him home. Arlo instead resolves to save Spot, making the vision of his father proud before it fades away. Arlo finds and attacks the pterodactyls, who have cornered Spot at the river. Arlo and Spot together plunge the pterodactyls into the water, where they are swept helplessly downstream. When another flash flood occurs, Arlo leaps into the water to rescue Spot as the two are swept away toward a waterfall. Arlo protects Spot as the two fall, and carries him to shore.

As they approach Arlo's home, the two again hear the unknown caveman call, and are approached by an entire caveman family. With great reluctance, Arlo pushes Spot to join his kind, and the two of them share a tearful goodbye.