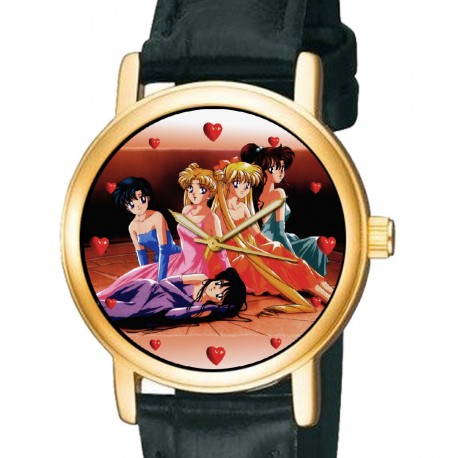 Sailor Moon, known in Japan as Bishōjo Senshi Sailor Moon (美少女戦士セーラームーン Bishōjo Senshi Sērā Mūn?, officially translated "Pretty Soldier Sailormoon" or "Pretty Guardian Sailor Moon"), is a Japanese manga series written and illustrated by Naoko Takeuchi. Fred Patten credits her with popularizing the concept of a team of magical girls, and Paul Gravett credits the series with "revitalizing" the magical-girl genre itself. Sailor Moon redefined the magical-girl genre, as previous magical girls did not use their powers to fight evil, but this has become one of the standard archetypes of the genre.

The story of the various metaseries revolves around the reborn defenders of a kingdom that once spanned the Solar System, and around the evil forces that they battle. The major characters — the Sailor Senshi (literally "Sailor Soldiers"; frequently called "Sailor Scouts" or "Guardians" in many Western versions), teenage girls — can transform into heroines named for the Moon and planets. The use of "Sailor" comes from a style of girls' school uniform popular in Japan, the sērā fuku ("Sailor outfit"), on which Takeuchi modeled the Sailor Senshi's uniforms. The fantasy elements in the series are heavily symbolic and often based on mythology.

Before writing Sailor Moon Takeuchi had written Codename: Sailor V, which centered around just one Sailor Senshi. She devised the idea when she wanted to create a cute series about girls in outer space, and her editor suggested she should put them in sailor fuku. When Sailor V was proposed[by whom?] for adaptation into an anime, the concept was modified by Takeuchi so that Sailor V herself became only one member of a team. The resulting manga series merged elements of the popular magical girl genre and the Super Sentai Series which Takeuchi admired,[8] making Sailor Moon one of the first series ever to combine the two.

The manga resulted in spinoffs into other types of media, including a highly popular anime adaptation, as well as musical theatre productions, video games, and a tokusatsu series. Although most concepts in the many versions overlap, often notable differences occur, and thus continuity between the different formats remains limited.

The protagonist of Sailor Moon, Usagi Tsukino, an ordinary, ditzy, 14-year-old girl — or so she thinks — discovers a talking cat named Luna, who reveals Usagi's identity as "Sailor Moon", a special warrior with the destiny of saving the planet Earth, and later the entire galaxy. Usagi must now find the Moon Princess and protect Earth from a series of antagonists, beginning with the Dark Kingdom that had appeared once before, long ago, and destroyed the Kingdom of the Moon.

When the dark nemesis attacked the kingdom, the Queen sent the Moon Princess, her guardians, advisors, and her true love into the future to be reborn. As Usagi and Luna battle evil and search for the Moon Princess, they meet and awaken the other Sailor Senshi, incarnations of the Moon Princess' protectors, and the mysterious Tuxedo Mask.

As the series progresses, Usagi and her friends learn more and more about the enemies they face and the evil force that directs them. The characters' pasts are mysterious and hidden even to them, and much of the early series is devoted to discovering their true identities and pasts. Luna, who teaches and guides the Sailor Senshi, does not know everything about their histories either, and the Senshi eventually learn that Usagi is the real Moon Princess. The Moon Princess' mother had her reborn as a Sailor Senshi to protect her. Gradually Usagi discovers the truth about her own past life, her destined true love, and the possibilities for the future of the Solar System.

The plot spans five major story arcs, each of them represented in both the manga and anime, usually under different names:

The anime added an additional minor arc at the start of the second series, and spent the first few episodes of Sailor Stars wrapping up the plot from the previous series. Taking place before the manga timeline, its sister series Codename: Sailor Vtells the story of Sailor V, Minako Aino and her adventures during the year before Sailor Moon itself starts. Many characters from Codename: Sailor V return in Sailor Moon, including Sailor V herself (under the name "Sailor Venus"). The musicals added several extra storylines, including an extended version of the Stars arc, including revivals of past villains, the revival of the Dark Kingdom, a trip to Kaguya Shima (Kaguya Island), a group of villains from Nibiru and the Dracul Series.