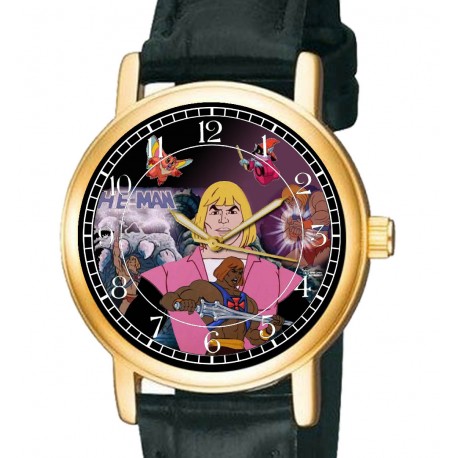 By the time the animated series was developed, He-Man's origins had been revised: his true identity was Prince Adam of Eternia, son of King Randor and Queen Marlena (an earthling), who ruled the Kingdom of Eternia on the planet of the same name. The Sorceress of Castle Grayskull endowed Prince Adam with the power to transform into He-Man, which Adam did by raising his Power Sword and proclaiming, "By the power of Grayskull..." Once the transformation was complete, he continued "...I have the power!" The differences from Prince Adam and He-Man were minimal; He-Man had a slightly deeper voice, and slightly darker skin and hair.

Prince Adam's pet was a cowardly green tiger named Cringer. When Adam became He-Man, he transformed Cringer into a brave armored green tiger named Battle Cat by pointing his sword at him – an ability Adam discovered accidentally the first time he turned into He-Man. Cringer, naturally, cowered in fear at seeing what Adam had become; while reassuring him that nothing had really changed Adam pointed the sword at Cringer, which sent a bolt of energy toward the tiger and transformed him. Battle Cat served as He-Man's steed and fierce fighting companion ever since.

Adam was friendly with the beautiful, strong-willed Teela, who (unbeknownst to her) was the daughter of the Sorceress. Teela was adopted by Prince Adam's mentor, Man-At-Arms (whose proper name was Duncan). Adam and Teela grew up together and now, as Captain of the Guard, she was entrusted to protect the prince. Unaware of his alternate identity as He-Man, she saw Adam as lazy and cowardly.

Man-At-Arms was He-Man's closest companion and the Eternian royal family's innovator of technology and weapons. In many episodes, Man-At-Arms unveiled new and fantastic weapons or devices which helped He-Man and his friends. Castle Grayskull was the source of He-Man's powers. Inside the Castle lived the Sorceress, who granted Prince Adam his transformative abilities and communicates telepathically with He-Man. To protect his family He-Man kept his double identity a secret, sharing it only with Orko, Man-At-Arms, Cringer/Battle Cat and the Sorceress.

He-Man's chief adversary was Skeletor: a blue-skinned sorcerer with a yellow skull for a head, wearing a cowl. He was skilled in black magic and all forms of combat. Though his origin was mysterious, and the cartoon described him only as a "demon from another dimension", a tie-in comic implied that Skeletor's true identity was Prince Keldor (older brother of King Randor), thus making him He-Man's uncle. It was revealed in the animated motion picture He-Man and She-Ra: The Secret of the Sword that Skeletor was Hordak's right-hand man until his capture (Hordak referred to Skeletor as "my old pupil" and Skeletor's throne-room in Snake Mountain as "my old throne-room" – to which Skeletor retorts, "my throne-room now") and (supposed) release. Skeletor was accompanied by a group of henchmen who aid with his evil schemes.