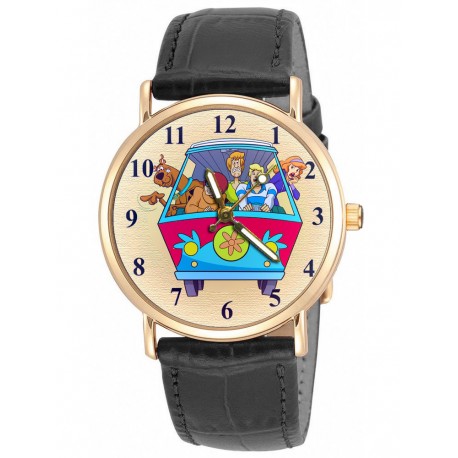 Scooby-Doo is an American cartoon series, followed by various related series, produced from 1969 to the present day. The original series, Scooby-Doo, Where Are You!, was created for Hanna-Barbera Productions by writers Joe Ruby andKen Spears in 1969. This Saturday morning cartoon series featured four teenagers—Fred Jones, Daphne Blake, Velma Dinkley, and Norville "Shaggy" Rogers— and their talking Great Dane dog named "Scooby-Doo" who solve mysteries involving supposedly supernatural creatures through a series of antics and missteps.

Hanna-Barbera and its successor Warner Bros. Animation have produced numerous follow-up and spin-off animated series and several related works, including television specials and telefilms, a line of direct-to-video films, and two Warner Bros.–produced feature films. Some versions of Scooby-Doo feature different variations on the show's supernatural theme, and include characters such as Scooby's cousin Scooby-Dum and nephew Scrappy-Doo in addition to or instead of some of the original characters.

In 1969, parent-run organizations, most notably Action for Children's Television (ACT), began vocally protesting what they perceived as an excessive amount of gratuitous violence in Saturday morning cartoons during the mid-to-late 1960s.[3]Most of these shows were Hanna-Barbera action cartoons such as Jonny Quest, Space Ghost and The Herculoids, and virtually all of them were canceled by 1969 because of pressure from the parent groups. Members of these watchgroups served as advisers to Hanna-Barbera and other animation studios to ensure that their new programs would be safe for children.

Fred Silverman, executive in charge of children's programming for the CBS network at the time, was looking for a show that would revitalize his Saturday morning line and please the watchgroups at the same time. The result was The Archie Show, based upon Bob Montana's teenage humor comic book Archie. Also successful were the musical numbers The Archies performed during each program (one of which, "Sugar, Sugar", was the most successful Billboard number-one hit of 1969). Silverman was eager to build upon this success, and contacted producers William Hanna and Joseph Barbera about possibly creating another show based on a teenage rock group, but with an extra spice: the kids would solve mysteriesin between gigs. Silverman envisioned the show as a cross between the popular I Love a Mystery radio serials of the 1940s and the popular early 1960s TV show The Many Loves of Dobie Gillis.

Hanna and Barbera passed this task along to two of their head story writers, Joe Ruby and Ken Spears, and artist/character designer Iwao Takamoto. Their original concept of the show bore the title Mysteries Five, and featured five teens: Geoff, Mike, Kelly, Linda, Linda's brother "W.W." and their dog, Too Much, who were all members of the band "Mysteries Five" (even the dog; he played the bongos). When "The Mysteries Five" were not performing at gigs, they were out solving spooky mysteries involving ghosts, zombies, and other supernatural creatures. Ruby and Spears were unable to decide whether Too Much would be a large cowardly dog or a small feisty dog. When the former was chosen, the options became a large goofy German Shepherd or a big shaggy sheepdog. After consulting with Barbera on the issue, Too Much was finally set as a Great Dane, primarily to avoid a direct correlation to The Archies (who had a sheepdog, Hot Dog, in their band). Ruby and Spears feared the Great Dane would be too similar to the comic strip character Marmaduke, but Barbera assured them it would not be a problem.

Takamoto consulted a studio colleague who happened to be a breeder of Great Danes. After learning the characteristics of a prize-winning Great Dane from her, Takamoto proceeded to break most of the rules and designed Too Much with overly bowed legs, a double chin, and a sloped back, among other abnormalities.[6][dead link][7]

By the time the show was ready for presentation by Silverman, a few more things had changed: Geoff and Mike were merged into one character called "Ronnie"[8] (later renamed "Fred", at Silverman's behest), Kelly was renamed to "Daphne", Linda was now called "Velma", and Shaggy (formerly "W.W.") was no longer her brother. Also, Silverman—not being very fond of the name Mysteries Five — had renamed the show Who's S-S-Scared? Using storyboards, presentation boards, and a short completed animation sequence, Silverman presented Who's S-S-Scared? to the CBS executives as the centerpiece for the upcoming 1969–1970 season's Saturday morning cartoon block. The executives felt that the presentation artwork was too spooky for young viewers and, thinking the show would be the same, decided to pass on it.

Now without a centerpiece for the upcoming season's programming, Silverman turned to Ruby and Spears, who reworked the show to make it more comedic and less frightening. They dropped the rock band element, and began to focus more attention on Shaggy and Too Much. According to Ruby and Spears, Silverman was inspired by Frank Sinatra's scat "doo-be-doo-be-doo" at the end of his recording of "Strangers in the Night" on a flight to one of the development meetings, and decided to rename the dog "Scooby-Doo" and re-rechristen the show Scooby-Doo, Where Are You![5] The revised show was re-presented to CBS executives, who approved it for production. Since then there have been many changes in the characters voices.