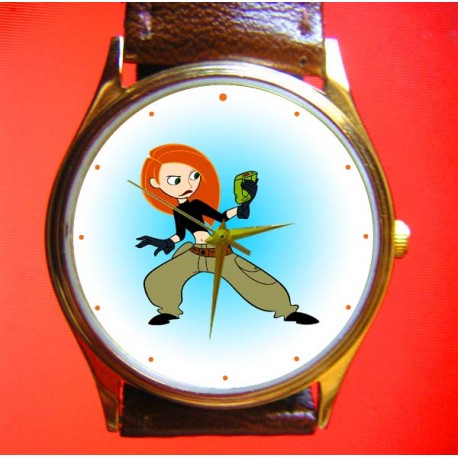 The series revolves around Kim’s fight against her enemies as well as her everyday life problems as a normal teenager, which are usually presented as a subplot.[1] Kim lives in what is supposed to be an "Any Town, USA" named Middleton, although it is built around a thriving NASA-like Space Center with several supportive Science Labs.

Creators Mark McCorkle and Bob Schooley claim they created the show in an elevator. As they tell it, McCorkle looked at Schooley and said, "Kim Possible: she can do anything". Schooley at once replied, "Her partner is Ron Stoppable: he can'tdo anything". The creators also maintain that it was always their intention for Kim and Ron to eventually become involved romantically, rather than just remaining best friends. This becomes a reality in the supposed series-ending movie, Kim Possible: So the Drama. The romantic theme also continues in season four.

The series premiered on Disney Channel on June 7, 2002[3], and the first episode to air, "Crush", was nominated for a Primetime Emmy award the following year. After the premiere of this episode, Kim Possible was the most-watched and highest-rated television show on Disney Channel at that time. The series as a whole was nominated for the Daytime Emmy in 2004 and again in 2005 (that year it received five nominations and won one for Outstanding Sound Mixing — Live Action and Animation).[4] The show has been widely praised for its dialogue, animation, and characters (both heroic and villainous).

On February 22, 2005, after three seasons and 65 episodes, the show ended production. Due to the popularity of the series and grassroots operations by dedicated KP fans, Disney announced on November 29, 2005, that the show would be renewed for a fourth season, which debuted on Disney Channel on February 10, 2007. The series finale aired on September 7, 2007, with the airing of the one-hour-long concluding episode "Graduation."

Steve Loter documented the production of the final episode of season four, and thus the completion of the Kim Possible franchise, in a blog titled "So the Finale" hosted on Blogger. It included behind-the-scenes and production information from the perspective of the crew as well as production sketches from one of several alternative endings that had been scripted. "So the Finale" maintained an open comment system allowing fans to express their views on the franchise and its closure.

The show's title music, "Call Me, Beep Me," is sung by Christina Milian. Artist Stephen Silver was the lead character designer.

The series is currently the second longest running Disney Channel Original Series in terms of duration, running for five years and three months.