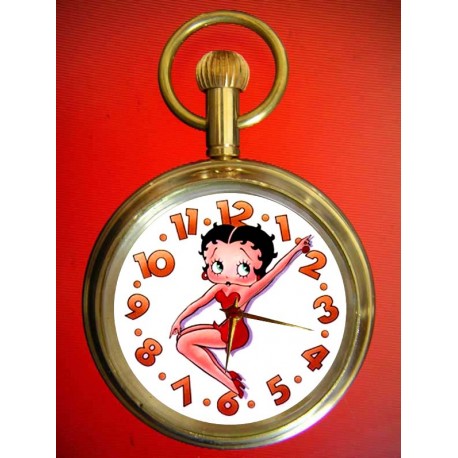 Betty Boop made her first appearance on August 9, 1930, in the cartoon Dizzy Dishes;  the sixth installment in Fleischer's Talkartoon series. Although Clara Bow is often given as being the model for Boop, she actually began as a caricature of singer Helen Kane. The character was originally created as an anthropomorphic French poodle.

Max Fleischer finalized Betty Boop as a human character in 1932, in the cartoon Any Rags. Her floppy poodle ears became hoop earrings, and her black poodle nose became a girl's button-like nose. Betty Boop appeared as a supporting character in 10 cartoons as a flapper girl with more heart than brains. In individual cartoons, she was called "Nancy Lee" or "Nan McGrew" – derived from the 1930 Helen Kane film Dangerous Nan McGrew – usually serving as a girlfriend to studio star, Bimbo.

Betty's voice was first performed by Margie Hines, and was later performed by several different voice actresses, including Kate Wright, Bonnie Poe, Ann Rothschild (also known as Little Ann Little), and most notably, Mae Questel. Questel, who began voicing Betty Boop in 1931, continued with the role until her death in 1998. Today, Betty is voiced by Tress MacNeille, Sandy Fox and Tara Strong in commercials.

Although it has been assumed that Betty's first name was established in the 1931 Screen Songs cartoon, Betty Co-ed, this "Betty" is an entirely different character. Even though the song may have led to Betty's eventual christening, any reference to Betty Co-ed as a Betty Boop vehicle is incorrect although the official Betty Boop website describes the titular character as a "prototype" of Betty. There are at least 12 Screen Songs cartoons that featured Betty Boop or a similar character. Betty appeared in the first "Color Classic" cartoon Poor Cinderella, her only theatrical color appearance in 1934. In the film, she was depicted with red hair as opposed to her typical black hair. Betty also made a cameo appearance in the feature film Who Framed Roger Rabbit (1988), in which she appeared in her traditional black and white and was voiced by Mae Questel.

Betty Boop was the star of the Talkartoons by 1932 and was given her own series that same year, beginning with Stopping the Show. From that point on, she was crowned "The Queen of the Animated Screen." The series was popular throughout the 1930s, lasting until 1939.

As a sex symbol

Betty Boop is regarded as one of the first and most famous sex symbols on the animated screen; she is a symbol of the Depression era, and a reminder of the more carefree days of Jazz Age flappers. Her popularity was drawn largely from adult audiences, and the cartoons, while seemingly surreal, contained many sexual and psychological elements, particularly in the "Talkartoon," Minnie the Moocher, featuring Cab Calloway and his orchestra.

Minnie the Moocher defined Betty's character as a teenager of a modern era, at odds with the old world ways of her parents. In the cartoon, after a disagreement with her parents, Betty runs away from home, accompanied by her boyfriend Bimbo, only to get lost in a haunted cave. A ghostly walrus (rotoscoped from live-action footage of Calloway), sings Calloway's famous song "Minnie the Moocher", accompanied by several other ghosts and skeletons. This haunting performance sends the frightened Betty and Bimbo back to the safety of home. "Minnie the Moocher" served as a promotion for Calloway's subsequent stage appearances and also established Betty Boop as a cartoon star. The eightTalkartoons that followed all starred Betty, leading her into her own series beginning in 1932. With the release of Stopping the Show (August 1932), the Talkartoons were replaced by the Betty Boop series, which continued for the next seven years.

Betty Boop was unique among female cartoon characters because she represented a sexualized woman. Other female cartoon characters of the same period, such as Minnie Mouse, displayed their underwear or bloomers regularly, in the style of childish or comical characters, not a fully defined woman's form. Many other female cartoons were merely clones of their male co-stars, with alterations in costume, the addition of eyelashes, and a female voice. Betty Boop wore short dresses, high heels, a garter, and her breasts were highlighted with a low, contoured bodice that showed cleavage. In her cartoons, male characters frequently try to sneak peeks at her while she's changing or simply going about her business. In Betty Boop's Bamboo Isle, she does the hula wearing nothing but a lei, strategically placed to cover her breasts, and a grass skirt. This was repeated in her first cameo appearance in Popeye the Sailor (1933). There was, however, a certain girlish quality to the character. She was drawn with a head more similar to a baby's than an adult's in proportion to her body. This suggested the combination of girlishness and maturity that many people saw in the flapper type, which Betty represented.

While the character was kept pure and girl-like onscreen, compromises to her virtue were a challenge. The studio's 1931 Christmas card featured Betty in bed with Santa Claus, winking at the viewer. Also in 1931, the Talkartoons The Bum Bandit and Dizzy Red Riding Hood were given distinctly "impure" endings. Officially, Betty was only 16 years old, according to a 1932 interview with Fleischer (although in The Bum Bandit, she's portrayed as a married woman with many children, and also has an adult woman's voice, rather than the standard "boop-boop-a-doop" voice).

Attempts to compromise her virginity were reflected in Chess-Nuts (1932) and most importantly in Boop-Oop-a-Doop (1932). In Chess-Nuts, the Black King goes into the house where Betty is and ties her up. When she rejects him, he pulls her out of the ropes, drags her off to the bedroom and says, "I will have you." The bed, however, runs away and Betty calls for help through the window. Bimbo comes to her rescue, and she is saved before anything happens. In Boop-Oop-a-Doop, Betty is a high-wire performer in a circus. The villainous ringmaster lusts for Betty as he watches her from below, singing "Do Something," a song previously performed by Helen Kane. As Betty returns to her tent, the ringmaster follows her inside and sensually massages her legs, surrounds her, and threatens her job if she doesn't submit. This is perhaps one of the earliest portrayals of sexual harassment on the animated screen, and was very daring at a time when such subject matter was considered taboo. Betty pleads with the ringmaster to cease his advances, as she sings "Don't Take My Boop-Oop-A-Doop Away." Koko the Clown is practicing his juggling outside the tent, and overhears the struggle inside. He leaps in to save Betty, struggling with the ringmaster, who loads him into a cannon and fires it. Koko, who remained hiding inside the cannon, knocks the ringmaster out cold with a mallet, and inquires about Betty's welfare, to which she answers in song, "No, he couldn't take my boop-oop-a-doop away"