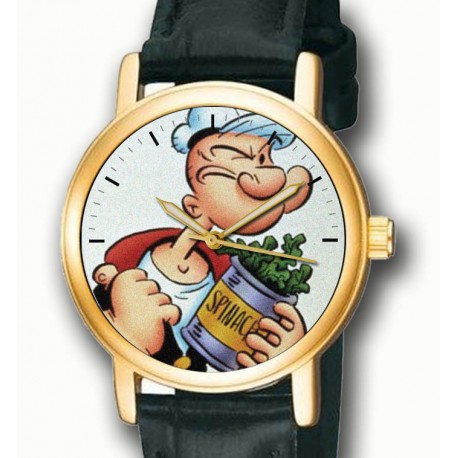 Popeye the Sailor is a cartoon fictional character created by Elzie Crisler Segar, who has appeared in comic strips and animated cartoons in the cinema as well as on television. He first appeared in the daily King Features comic strip Thimble Theatre on January 17, 1929. Popeye also became the strip's title in later years.

Although Segar's Thimble Theatre strip was in its tenth year when Popeye made his debut in 1929, the sailor quickly became the main focus of the strip and Thimble Theatre became one of King Features' most popular properties during the 1930s. Thimble Theatre was continued after Segar's death in 1938 by several writers and artists, most notably Segar's assistant Bud Sagendorf. The strip, now titled Popeye, continues to appear in first-run installments in itsSunday edition, written and drawn by Hy Eisman. The daily strips are reprints of old Sagendorf stories.

In 1933, Max and Dave Fleischer's Fleischer Studios adapted the Thimble Theatre characters into a series of Popeye the Sailor theatrical cartoon shorts for Paramount Pictures. These cartoons proved to be among the most popular of the 1930s, and the Fleischers—and later Paramount's own Famous Studios—continued production through 1957. The cartoons are now owned by Turner Entertainment, a subsidiary of Time Warner, and distributed by sister companyWarner Bros. Entertainment.

Over the years, Popeye has also appeared in comic books, television cartoons, arcade and video games, hundreds of advertisements and peripheral products, and a 1980 live-action film directed by Robert Altman starring comedianRobin Williams as Popeye.

Differences in Popeye's story and characterization show up depending upon which medium he is presented in. While Swee'Pea is definitively the ward of Popeye in the comic strips, he is often depicted as belonging to Olive Oyl in cartoons. The cartoons also occasionally feature family members of Popeye that have never appeared in the strip, notably his look-alike nephews Peepeye, Pupeye, Pipeye and Poopeye.

Even though there is no absolute sense of continuity in the stories, certain plot and presentation elements remain mostly constant, including purposeful contradictions in Popeye's capabilities. Though at times he seems bereft of manners or uneducated, Popeye is often depicted as capable of coming up with solutions to problems that (to the police, or, most importantly, the scientific community) seem insurmountable. Popeye has, alternatively, displayed Sherlock Holmes-like investigative prowess (determining for instance that his beloved Olive was abducted by estimating the depth of the villains' footprints in the sand), scientific ingenuity (as his construction, within a few hours, of a "spinach-drive" spaceship), or oversimplified (yet successful) diplomatic argumentation (by presenting to diplomatic conferences his own existence --- and superhuman strength --- as the only true guarantee of world peace). Popeye's pipe also proves to be highly versatile. Among other things, it has served as a cutting torch, jet engine, propeller, periscope, and, of course, a whistle with which he produces his trademark toot. Popeye also on occasion eats spinach through his pipe, sometimes sucking in the can itself along with the contents. He seldom appears to use it to smoke tobacco.

Popeye's vastly versatile exploits are deemed even more amusing by a few standard plot elements. One is the love triangle between Popeye, Olive and Bluto, and the latter's endless machinations to claim Olive at Popeye's expense. Another is his (near-saintly) perseverance to overcome any obstacle to please Olive – who, quite often, renounces Popeye for Bluto's dime-store advances. She is the only character Popeye will permit to give him a thumping. Finally, in terms of the endless array of villain plots, Popeye mostly comes to the truth by "accidentally" sneaking up on the villains, the moment they are bragging about their schemes' ingenuity, thus revealing everything to an enraged Popeye, who uses his "fisks" in the name of justice.