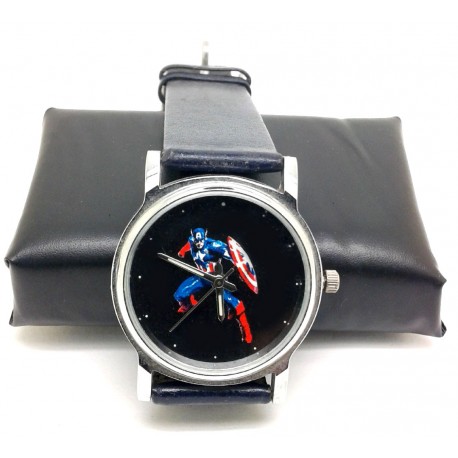 An intentionally patriotic creation who was often depicted fighting the Axis powers of World War II, Captain America was Timely Comics' most popular character during the wartime period. After the war ended, the character's popularity waned and he disappeared by the 1950s aside from an ill-fated revival in 1953. Captain America was reintroduced by Marvel Comics during the Silver Age of comics when he was revived from suspended animation by the superhero team the Avengers in The Avengers #4 (March 1964). Since then, Captain America has often led the team, as well as starring in his own series.

Steve Rogers was purportedly assassinated in Captain America vol. 5, #25 (March 2007), although he was later revealed to be alive. The comic-book series Captain America continued to be published,[4] with Rogers' former sidekick, James "Bucky" Barnes, having taken up the mantle, and keeping it at the insistence of Rogers, who upon his return began operating as an intelligence agent in the Secret Avengers title, and in the limited series Steve Rogers: Super Soldier, before resuming the identity after Bucky's death was staged.

In 1940, writer Joe Simon conceived the idea for Captain America and made a sketch of the character in costume. "I wrote the name 'Super American' at the bottom of the page," Simon said in his autobiography. "No, it didn't work. There were too many 'Supers' around. 'Captain America' had a good sound to it. There weren't a lot of captains in comics. It was as easy as that. The boy companion was simply named Bucky, after my friend Bucky Pierson, a star on our high school basketball team."

Simon recalled in his autobiography that Timely Comics publisher Martin Goodman gave him the go-ahead and directed that a Captain America solo comic book series be published as soon as possible. Needing to fill a full comic with primarily one character's stories, Simon did not believe that his regular creative partner, artist Jack Kirby, could handle the workload alone:

I didn't have a lot of objections to putting a crew on the first issue.... There were two young artists from Connecticut that had made a strong impression on me. Al Avison and Al Gabriele often worked together and were quite successful in adapting their individual styles to each other. Actually, their work was not too far from [that of] Kirby's. If they worked on it, and if one inker tied the three styles together, I believed the final product would emerge as quite uniform. The two Als were eager to join in on the new Captain America book, but Jack Kirby was visibly upset. 'You're still number one, Jack,' I assured him. 'It's just a matter of a quick deadline for the first issue.'

'I'll make the deadline,' Jack promised. 'I'll pencil it [all] myself and make the deadline.' I hadn't expected this kind of reaction ... but I acceded to Kirby's wishes and, it turned out, was lucky that I did. There might have been two Als, but there was only one Jack Kirby.

I wrote the first Captain America book with penciled lettering right on the drawing boards, with very rough sketches for figures and backgrounds. Kirby did his thing, building the muscular anatomy, adding ideas and pepping up the action as only he could. Then he tightened up the penciled drawings, adding detailed backgrounds, faces and figures.[6] Al Liederman would ink that first issue, which was lettered by Simon and Kirby's regular letterer, Howard Ferguson.

Simon said Captain America was a consciously political creation; he and Kirby were morally repulsed by the actions of Nazi Germany in the years leading up to the United States' involvement in World War II and felt war was inevitable: "The opponents to the war were all quite well organized. We wanted to have our say too."[8]

Captain America Comics #1 — cover-dated March 1941 and on sale in December 1940, a year before the attack on Pearl Harbor, but a full year into World War II — showed the protagonist punching Nazi leader Adolf Hitler in the jaw; it sold nearly one million copies.[9] While most readers responded favorably to the comic, some took objection. Simon noted, "When the first issue came out we got a lot of... threatening letters and hate mail. Some people really opposed what Cap stood for." The threats, which included menacing groups of people loitering out on the street outside of the offices, proved so serious that police protection was posted with Mayor Fiorello La Guardia personally contacting Simon and Kirby to give his support.

Though preceded as a "patriotically themed superhero" by MLJ's The Shield, Captain America immediately became the most prominent and enduring of that wave of superheroes introduced in American comic books prior to and during World War II,[citation needed] as evidenced by the unusual move at the time of premiering the character in his own title instead of an anthology title first. This popularity drew the attention and a complaint from MLJ that the character's triangular shield too closely resembled the chest symbol of their Shield character. In response, Goodman had Simon and Kirby create a distinctive round shield for issue 2, which went on to become an iconic element of the character.[11] With his sidekick Bucky, Captain America faced Nazis, Japanese, and other threats to wartime America and the Allies. Stanley Lieber, now better known by his pen name Stan Lee, contributed to the character in issue #3 in the filler text story "Captain America Foils the Traitor's Revenge," which introduced the character's use of his shield as a returning throwing weapon.[12] Captain America soon became Timely's most popular character and even had a fan-club called the "Sentinels of Liberty."

Circulation figures remained close to a million copies per month after the debut issue, which outstripped even the circulation of news magazines like Time during the period.  After the Simon and Kirby team moved to DC in late 1941, having producedCaptain America Comics through issue #10 (January 1942), Al Avison and Syd Shores became regular pencillers of the celebrated title, with one generally inking over the other. The character was also featured in All Winners Comics #1-19 (Summer 1941 – Fall 1946), Marvel Mystery Comics #80-84 and #86-92, USA Comics #6-17 (Dec. 1942 – Fall 1945), and All Select Comics #1-10 (Fall 1943 – Summer 1946).

In the post-war era, with the popularity of superheroes fading, Captain America led Timely's first superhero team, the All-Winners Squad, in its two published adventures, in All Winners Comics #19 and #21 (Fall–Winter 1946; there was no issue #20). After Bucky was shot and wounded in a 1948 Captain America story, he was succeeded by Captain America's girlfriend, Betsy Ross, who became the superheroine Golden Girl. Captain America Comics ended with issue #75 (Feb. 1950), by which time the series had been titled Captain America's Weird Tales for two issues, with the finale being a horror/suspense anthology issue with no superheroes.

In the Human Torch story titled "Captain America" in Marvel Comics' Strange Tales #114 (Nov. 1963),[15] writer-editor Stan Lee and artist and co-plotter Jack Kirby depicted the brash young Fantastic Four member Johnny Storm, the Human Torch, in an exhibition performance with Captain America, described as a legendary World War II and 1950s superhero who has returned after many years of apparent retirement. The 18-page story ends with this Captain America revealed as an impostor: it was actually the villain the Acrobat, a former circus performer the Torch had defeated in Strange Tales #106, who broke two thieves out of jail, hoping to draw the police away while trying to rob the local bank. Afterward, Storm digs out an old comic book in which Captain America is shown to be Steve Rogers. A caption in the final panel says this story was a test to see if readers would like Captain America to return.

Captain America was then formally reintroduced in The Avengers #4 (March 1964), which explained that in the final days of WWII, he had fallen from an experimental drone plane into the North Atlantic Ocean and spent decades frozen in a block of ice in a state of suspended animation. The hero found a new generation of readers as leader of that superhero team. Following the success of other Marvel characters introduced during the 1960s, Captain America was recast as a hero "haunted by past memories, and trying to adapt to 1960s society."

After then guest-starring in the feature "Iron Man" in Tales of Suspense #58 (Oct. 1964), Captain America gained his own solo feature in that "split book," beginning the following issue. Issue #63 (March 1965), which retold Captain America's origin, through issue #71 (Nov. 1965) was a period feature set during World War II and co-starred Captain America's Golden Age sidekick, Bucky. Kirby drew all but two of the stories in Tales of Suspense, which became Captain America with #100 (April 1968); Gil Kane and John Romita, Sr., each filled in once. Several stories were finished by penciller-inker George Tuska over Kirby layouts, with one finished by Romita Sr. and another by penciller Dick Ayers and inker John Tartaglione. Kirby's regular inkers on the series were Frank Giacoia (as "Frank Ray") and Joe Sinnott, though Don Heck and Golden Age Captain America artist Syd Shores inked one story each. The new title Captain America continued to feature artwork by Kirby, as well as a short run by Jim Steranko, and work by many of the industry's top artists and writers. It was called Captain America and the Falcon from #134-222 (although the Falcon's name was not on the cover for issues #193, 200, and 216).

This series — considered Captain America volume one by comics researchers and historians, following the 1940s Captain America Comics and its 1950s numbering continuation — ended with #454 (Aug. 1996).

After the Silver Age

As part of the aftermath of Marvel Comics' company-crossover storyline "Civil War", Steve Rogers was ostensibly killed in Captain America vol. 5, #25 (March 2007). Series writer Ed Brubaker remarked, "What I found is that all the really hard-core left-wing fans want Cap to be standing out on and giving speeches on the street corner against the George W. Bush administration, and all the really right-wing fans all want him to be over in the streets of Baghdad, punching out Saddam Hussein."[22] The character's co-creator, Joe Simon, remarked, "It's a hell of a time for him to go. We really need him now."[22] Artist Alex Ross designed a slightly revised Captain America costume that former sidekick Bucky Barnes began to wear as the new Captain America in vol. 5, #34 (March 2008)

The storyline of Rogers' return began in issue #600.[24][25] Rogers, who was not dead but caroming through time, returned to the present day in the six-issue miniseries Captain America: Reborn (Sept. 2009 – March 2010).

Spinoff series included Captain America Sentinel of Liberty (Sept. 1998 – Aug. 1999) and Captain America and the Falcon (May 2004 – June 2005). The 1940s Captain America appeared alongside the 1940s Human Torch and Sub-Mariner in the 12-issue miniseries Avengers/Invaders.[27][28]The 2007 mini-series Captain America: The Chosen, written by David Morrell and penciled by Mitchell Breitweiser, depicts a dying Steve Rogers' final minutes, at S.H.I.E.L.D. headquarters, as his spirit guides James Newman, a young American Marine fighting in Afghanistan. The Chosen is not part of the main Marvel Universe continuity.