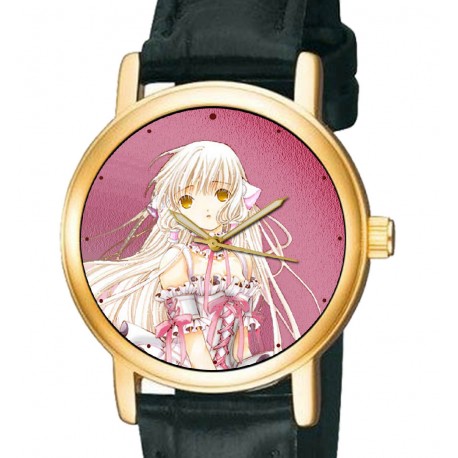 The series centers on the life of Hideki Motosuwa, a held-back student attempting to qualify for university by studying at Seki prep school in Tokyo. Besides a girlfriend, he dreams of having a persocom (パソコン?): an android used as a personal computer, which is expensive. On his way home one evening, he stumbles across a persocom in the form of a beautiful girl with thigh-length hair lying against a pile of trash bags, and he carries her home, not noticing that a disk fell on the ground. Upon turning her on, she instantly regards Hideki with adoration. The only word the persocom seems capable of saying is "chi" (ちぃ Chii?), thus he names her that. Hideki assumes that there must be something wrong with her, and so the following morning he has his neighbor Hiromu Shinbo analyze her with his mobile persocom Sumomo. After Sumomo crashes during the attempt they conclude that she must be custom-built.

Shinbo introduces Hideki to Minoru Kokubunji, a twelve-year-old prodigy who specializes in the field of custom-built persocoms. Minoru's persocoms, including Yuzuki, a fairly exceptional custom-built persocom, are not able to analyze Chi either, and thus they conclude that she may be one of the Chobits, a legendary series of persocoms rumoured to have free will and emotions. Although this is a possibility, Minoru is confident that it is only rumour. Yuzuki also adds that she does not resemble any persocom model in any available database and so she must be custom made after all.

A major part of the plot involves Hideki attempting to teach Chi words, concepts, and appropriate behaviours, in between his crammed schedule of school and work. At the same time, Chi seems to be developing feelings for Hideki, at an emotional depth she is not supposed to possess, and Hideki struggles with his feelings for her. The need to figure out more about Chi and her mysterious functions and past becomes a pull for the characters in the series.

Hideki's feelings intensify for Chi regardless of her being a persocom and despite his friends' painful experiences involving other persocoms. Chi becomes aware of her purpose through a picture book series called A City with No People which she finds in a bookstore. The books speak about many different things involving human and persocom relationships: persocoms and their convenience as friends and lovers, how there are things that they cannot do and questioning whether a relationship between a persocom and a human is really one-sided. It also speaks about the Chobits series; that they are different from other persocoms, and what they are incapable of doing unlike other persocoms. These picture books awaken Chi's other self, her sibling Freya who is aware of their past and helps Chi realize what she must do when she decides who her "person just for me" is. Together, Chi and Hideki explore the relationship between human beings and persocoms, as well as their friends' and their own.