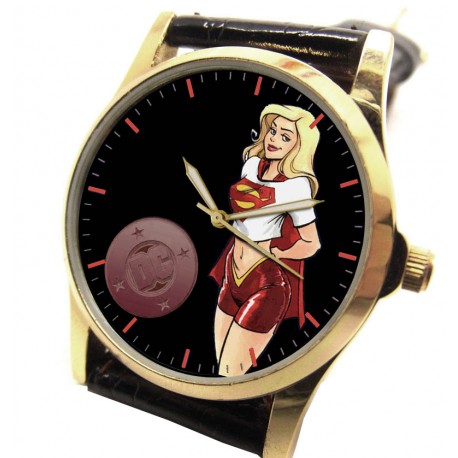 Supergirl is a female counterpart to Superman. As his cousin, she shares his super powers and vulnerability to Kryptonite. She was created by writer Otto Binder and designed by artist Al Plastino in 1959. She first appeared in the Action Comics comic book series and later branched out into animation, film, television, and merchandising. In May 2011, Supergirl placed 94th on IGN's list of the Top 100 Comic Book Heroes of All Time.

Supergirl (Kryptonian name Kara Zor-El) plays a supporting role in various DC Comics publications, including Action Comics, Superman, and several comic book series unrelated to Superman. In 1969, Supergirl's adventures became the lead feature in Adventure Comics, and she later starred in an eponymous comic book series which debuted in 1972 and ran until 1974, followed by a second monthly comic book series titled The Daring New Adventures of Supergirl, which ran from 1982 to 1984.

Supergirl dies in the 1985 limited series Crisis on Infinite Earths, and DC Comics subsequently rebooted the continuity of the DC Comics Universe, reestablishing Superman's character as the sole survivor of Krypton's destruction. Following the conclusion of Crisis on Infinite Earths, several different characters written as having no familial relationship to Superman have assumed the role of Supergirl, including Matrix, Linda Danvers, and Cir-El. Following the cancellation of the thirdSupergirl comic book series, starring the Linda Danvers version of the character, a modern version of Kara Zor-El was reintroduced into the DC Comics continuity in issue #8 of the Superman/Batman comic book series titled "The Supergirl from Krypton" (2004). The modern Kara Zor-El stars as Supergirl in an eponymous comic book series, in addition to playing a supporting role in various other DC Comics publications.

Many Superman stories had featured one-time appearances of a female version of Superman as a story gimmick.

After positive fan reaction to Super-Girl, the first recurring and most familiar version of Supergirl debuted in 1959. Kara Zor-El first appeared in Action Comics #252 (May 1959). The story that introduced the character was drawn by Al Plastino and written by Otto Binder, who had also createdMary Marvel, Captain Marvel's sister and female spinoff. Like Supergirl, Mary Marvel was a teen-age female version of an adult male superhero, wearing a costume that was identical to the older character's other than substituting a short skirt for tight trousers. Binder also created Miss America, a superhero who shared little other than the name with her sometime co-star Captain America.

Reaction at the D.C. Comics offices to Supergirl's first appearance was tremendous, with thousands of positive letters pouring in. The first published of these letters, in the August 1959 issue of Action Comics (#255), was written by an eleven-year-old from Garland, Texas named Dave Mitchell, who would go on to become a well-known Miami radio personality.

Issue #8 of the Superman/Batman series originally published in 2004 re-introduced Kara Zor-El into the DC continuity. Like the pre-Crisis version, this Kara claims to be the daughter of Superman's uncle Zor-El and aunt Alura In-Ze. Unlike the traditional Supergirl, Kara is born before Superman; she is a teenager when he is a baby. She is sent in a rocket in suspended animation to look after the infant Kal-El; however, her rocket gets caught in the explosion of Krypton and becomes encased in a Kryptonite asteroid. She arrives on Earth years after Kal-El has grown up and become known as Superman. Due to this extended period of suspended animation, she is "younger" than her cousin (she is referenced to be about 16, while Superman is portrayed to be about 29[citation needed]). At the end of "The Supergirl from Krypton" arc, her cousin Superman officially introduces her to all the heroes of the DC Comics Universe. Then she adopts the Supergirl costume and accepts the name.

A new Supergirl series, written by Jeph Loeb, began publication in August 2005. The storyline in the first arc of Supergirl depicts a darker, evil version of Kara emerging when Lex Luthor exposes her to Black Kryptonite. The evil Supergirl implies that Kara's family sent her to Earth to kill Kal-El as revenge for a family grudge; at the time, Kara herself refuses to believe this, but later flashbacks indicate that not only is this partly true, but Kara had been physically altered by her father as a child before being involved in several murders on Krypton.

Kara Zor-El is the last survivor of Argo City, which had survived the explosion of the planet Krypton and drifted through space. When the inhabitants of the colony are slain by Green Kryptonite, which was released by meteorites striking the lead barrier, Kara is sent to Earth by her father Zor-El to be raised by her cousin Kal-El (Superman). Fearing that she might not be recognized by Superman, Kara's parents provide a costume based on the Man of Steel's own.

On Earth, Kara acquires powers identical to Superman's and adopts the secret identity of Linda Lee, a resident of Midvale Orphanage. She conceals her blonde hair beneath a brunette wig and functions as Supergirl only in secret, at Superman's request, until she can gain, in his opinion, sufficient control of her powers. After she is adopted by Fred and Edna Danvers, Superman decides his cousin is ready to begin operating openly as Supergirl.

She attends Midvale High School as Linda Lee Danvers. In later years, after graduating from Stanhope College, she changes careers several times, holding jobs in student counseling, news reporting, and acting in a TV soap opera titled Secret Hearts. She also attends college in Chicago. Kara has many boyfriends, including Richard (Dick) Malverne, Jerro the Merboy from Atlantis, and Brainiac 5, a member of the Legion of Super-Heroes. She does, however, shun serious commitments, putting her super-career first.

Supergirl's secret identity is a closely held secret known only to Superman, her foster parents, and the Legion of Super-Heroes, of which she is as a member for a time. Like all Kryptonians, Supergirl is vulnerable to Kryptonite. Streaky, her orange cat, acquires temporary superpowers as a result of its exposure to "X-Kryptonite", a form of Kryptonite Supergirl accidentally created in an unsuccessful attempt to neutralize the effects of Green Kryptonite. Comet the Superhorse, a former centaur, is Supergirl's equine companion.

Supergirl's biological parents survive the radiation poisoning that killed everyone else in Argo City by entering the Survival Zone (a parallel continuum akin to the Phantom Zone). They are eventually rescued by Supergirl and decide to live in the bottle city of Kandor.

One way DC demonstrated the epic nature of its 12-issue limited series Crisis on Infinite Earths (April 1985-March 1986) was through the deaths of important characters. In issue #7 (October 1985), Supergirl sacrifices her life to save her cousin and the multiverse from destruction. When the Superman continuity rebooted after the Crisis on Infinite Earths, DC editors felt that Superman should be the sole survivor of Krypton, resulting in Kara being removed. Unlike a number of other characters who are shown dying in the Crisis, no one remembers Kara dying or even ever having existed.

After the events of Infinite Crisis, the sequel to Crisis on Infinite Earths, many historical events from the multiverse are now being remembered. Donna Troy, after her rebirth and inheritance of Harbinger's Orb, recalls the original Kara Zor-El and her sacrifice.[4]

A Post-Crisis Supergirl appears in Supergirl and the Legion of Super-Heroes, in which she is transported to the 31st century, and, as a result of her disorientation, for a time believes she is dreaming her surroundings into existence until finally convinced otherwise. Although her memories of her time with the Legion are erased before she returns to the present, the mental blocks break down upon encountering the pre-Crisis versions of Legionnaires Karate Kid and Triplicate Girl (Una).

Supergirl exhibits new powers, manifesting sunstone crystals from her body; so far she only does so while under great stress (for example, when Cassandra Cain tries to kill her). Supergirl's father implants the crystals within his daughter's body to protect her from malevolent beings from the Phantom Zone. The Zone dwellers are released when Jor-El creates the Phantom Zone Projector and exploits the Zone as a prison. Kara's father, believing that Kal-El is a lure to the Zone denizens, instructs Kara to destroy him. More recent comics have cast this plotline as the result of Kryptonite poisoning from the Kryptonite asteroid in which she was trapped.

A recently completed storyline focused on her promise to a little boy that she would save him. She tries to make good on her promise, following different avenues searching for a cure for his cancer. After he died, she tracks down a villain with the ability to jump through time, but decides not to use that solution, as she would just be doing the same thing as the villain. She accepts that sometimes she cannot save everyone.

After Superman manages to rescue the Kryptonian bottled city of Kandor from Brainiac, Kara is reunited with her parents. However that reunion becomes bittersweet, as Reactron kills her father, and her mother dies when New Krypton is destroyed by a trap in Reactron left by Lex Luthor.