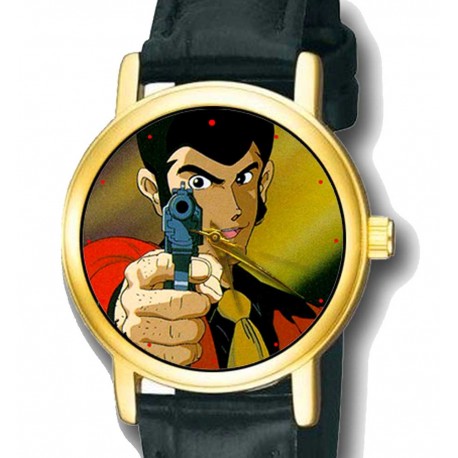 Lupin III (ルパン三世 Rupan Sansei?), also written as Lupin the Third or Lupin the 3rd, is a Japanese manga series written and illustrated by Kazuhiko Kato under his pen name, Monkey Punch. It follows the escapades of master thief Arsène Lupin III, the grandson of Arsène Lupin, the gentleman thief of Maurice Leblanc's series of novels.

The first Lupin III manga, which first appeared in Weekly Manga Action on August 10, 1967, spawned a media franchise that includes numerous manga, four anime television series, five animated feature films, a live-action film, three OVAs, yearly television specials since 1989, music CDs, video games, and a musical. Many different companies have owned the English-language distribution rights to various Lupin III properties at various times, with just the first two movies having been released by over 10 companies alone. Tokyopop acquired the license to the original manga in 2002, and later the second series in 2004. In 2002, Funimation Entertainment purchased the rights to several of the television specials and films.Geneon licensed and dubbed 79 episodes of the second television series, 26 of which were broadcast on Cartoon Network's Adult Swim during 2003. In 2012, Discotek Media released the entire first television series on DVD, they also own the rights to several of the previously released titles, and announced more to come in 2013.

Over forty years after its creation, Lupin III remains popular, with several different manga series currently being published, yearly television specials and a fourth anime series airing in 2012. For several years, issues relating to the copyright of Maurice Leblanc's intellectual property meant that the Lupin name was removed from its releases outside of Japan, usually changed to "Rupan". However, the copyright has now expired, allowing foreign releases to use the Lupin name.

Arsène Lupin III, the grandson of the fictional gentleman thief, Arsène Lupin, is considered the world's greatest thief, known for announcing his intentions to steal valuable objects by sending a calling card to the owners of his desired items. His right-hand man and closest ally is Daisuke Jigen, an expert marksman who can accurately shoot a target in 0.3 seconds. Although Lupin and Jigen frequently work as a two-man team, they are often joined by Goemon Ishikawa XIII, a master swordsman whose sword can cut anything, or Fujiko Mine, a femme fatale and Lupin's love interest. Although Fujiko usually works together with the others, she occasionally exploits Lupin's interest in her to steal the treasure for herself. Lupin and his gang are constantly chased by Inspector Koichi Zenigata of the ICPO, who has made it his life's work to arrest them, chasing Lupin across the globe.

Monkey Punch's inspiration for the series was the fictional French gentleman thief Arsène Lupin, created by Maurice Leblanc. However Monkey Punch did not ask permission to use the character's name, leading to eventual copyright issues with the Leblanc estate.

When Monkey Punch began Lupin III, he was already working on another series, Pinky Punky. Monkey Punch enjoys writing outlaw characters, and both Lupin III and Pinky Punky made use of outlaws as central characters. According to him, this made it easy for him to write two series without much pressure. Monkey Punch enjoys puzzles and mysteries such as Columbo and Agatha Christie novels, and was also inspired by The Three Musketeers. He believes the characters of Lupin and Fujiko are similar to the characters of D'Artagnan and Milady de Winter, and describes them as "Not necessarily lovers, not necessarily husband and wife, but more just having fun as man and woman with each other".[3] Another influence on the manga was MAD Magazine.[4] The appeal of drawing Lupin comes from being able to go anywhere without obstacles and being able to do whatever he wants, whenever he wants. However, this is contrasted by the appeal of Zenigata's strict personality. Originally the series was only expected to last three months, but due to its popularity, Monkey Punch continued to draw it. However, despite his happiness at its success, he has expressed confusion over its popularity.

The original manga series was written and illustrated by Monkey Punch. It was serialized by Futabasha in Weekly Manga Action in 94 chapters from August 10, 1967 to May 22, 1969.[2] In 1971, Monkey Punch continued the series, referred to asLupin III: The New Adventures, until April 27, 1972. The original 94 chapters were later combined with the 36 New Adventure ones and published into 14 tankōbon volumes.[5] Tokyopop licensed the series for North America, and released all 14 volumes between January 1, 2003 and July 6, 2004. In Europe, the series was licensed by Kappa Edizioni in Italy,[6] and Ediciones Mangaline in Spain.

Monkey Punch began publishing the second Lupin manga, Shin Lupin III, also known as Lupin III – World's Most Wanted, on June 23, 1977. This series ran for 188 chapters and was collected into 16 tankōbon volumes. Tokyopop licensed the second series, and released the first 9 volumes between September 7, 2004 and July 10, 2007,[8] Tokyopop later chose not to relicense the series due to low sales.

A third manga series, Lupin III S, began in January 1997. The story was written by Satozumi Takaguchi and illustrated by Shusay, under the supervision of Monkey Punch. Five stories were published in Weekly Manga Action and 2 Action, then collected by Futabasha in a single volume.

The fourth manga series, Lupin III Y, was written by Monkey Punch and illustrated by Manatsuki Yamakami. The series was serialized in Weekly Manga Action from 1998 to 2003, and the chapters were collected into 20 volumes published between May 27, 1999 and August 28, 2004.[13] This series was resumed in the summer 2009 issue of Lupin III Official Magazine, referred to as Shin Lupin III Y. While not available in English, online manga distributor JManga's Japanese mirror has five raw volume of Lupin III Y available for purchase.

A sixth work titled Lupin III H began in the summer 2009 issue of Lupin III Official Magazine. It is written by Monkey Punch and illustrated by Naoya Hayakawa.