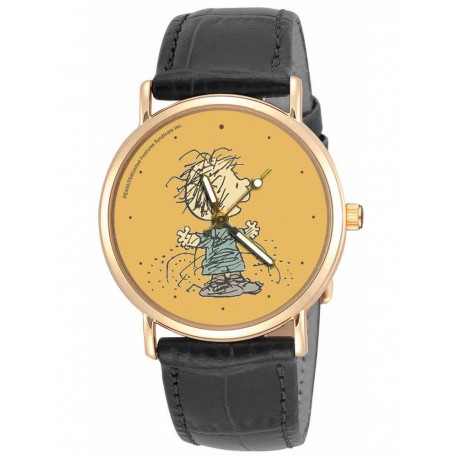 "Pig-Pen" is a nickname, invariably written in quotation marks in the strip. In the character's first appearance on July 13, 1954, in a strip directly parodying the first chapter of Lord of the Flies, he declares, "I haven't got a name . . . People just call me things . . . Real insulting things." If he does have a real name, it is never mentioned. In a 2000 Gallup Poll "Pig-Pen" was found to be the fifth most popular Peanuts character.

"Pig-Pen" is known for his perpetually filthy overalls and the cloud of dirt and dust that follows him wherever he goes. When he takes a deep breath (to sing, for example), the dust rises briefly around him. He sometimes refers to the cloud that surrounds him with pride as the dust of ancient civilizations.[2] He cannot seem to rid himself of the dust for more than the briefest of periods--indeed, in spite of his best efforts, it appears that he cannot stay clean. He is referred to in an early strip as the only person who can get dirty while walking in a snowstorm.[3] Nevertheless, on rare occasions he has very briefly appeared clean, and hence unrecognizable. Once this was in order to impress Violet, of whom he was a bit fond. On another occasion (September 6, 1954), he managed to keep one side of his body clean and presented this clean side to Patty, causing her to believe that he was completely clean.

Once, after bathing and dressing in clean clothes, "Pig-Pen" stepped outside his house, and instantaneously became dirty and disheveled, whereupon he declared to Charlie Brown, "You know what I am? I'm a dust magnet!" On another occasion, "Pig-Pen" decided it was important to have clean hands, but after failing to wash them, realized that he had "reached a point of no return."

One notable exception is an earlier strip where he gets caught in a brief but heavy rainfall, and while trying to seek shelter, the storm ends, revealing him to be clean. He responds with disdain, stating that "in one minute the rain has washed away what took me all day to accomplish".

Charlie Brown is the sole Peanuts character to unconditionally accept "Pig-Pen" for who he is, even defending "Pig-Pen's" uncleanliness in one strip (which was re-used in A Charlie Brown Christmas):

Charles Schulz admitted that he came to regret "Pig-Pen's" popularity, given the character's essentially one-joke nature; he utilized the character very rarely in the later years of the strip's run.

Like most of Schulz's characters, "Pig-Pen" appeared in several of the animated Peanuts television specials beginning in the 1960s. One time his clean self was shown in a miniseries titled "This Is America, Charlie Brown", where he is an astronaut aboard a futuristic space station, demonstrating how personal hygiene would apply in zero gravity. True to form, the clean "Pig-Pen" is immediately dirtied again when dirt is attracted to him magnetically. In the 1990s, he appeared (in an animated overlay against a live-action backdrop) in a series of television commercialsfor Regina vacuum cleaners where all the dirt is sucked off his body and filthy trousers by one of the company's products, arguably one of the few times where "Pig-Pen" remains clean.

Geoffrey Ornstein first voiced "Pig-Pen" in the 1965 movie A Charlie Brown Christmas. Although he also later played the role in A Boy Named Charlie Brown, other various actors have voiced him ever since.

"Pig-Pen" last appeared in the Peanuts comic strip on September 8, 1999. That strip was very uncharacteristic of him in that it showed him embarrassed to the point of shame in his dirtiness, with none of the pride or sense of destiny that he expressed in earlier strips.