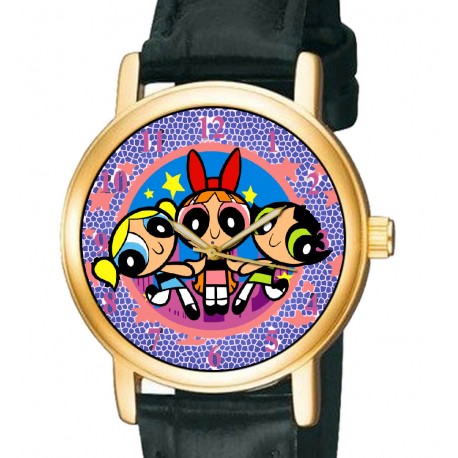 The Powerpuff Girls revolves around the adventures of Blossom, Bubbles, and Buttercup. Each of the girls has a color: Blossom is pink, Bubbles is blue, and Buttercup is green. The plot of a typical episode is some humorous variation of standard superhero and tokusatsu fare, with the girls using their powers to defend their town from villains and giant monsters. In addition, the girls have to deal with normal issues young children face, such as sibling rivalries, loose teeth, personal hygiene, going to school, bed wetting, or dependence on a security blanket. Episodes often contain more or less hidden references to older pop culture (especially noticeable in the episode "Meet the Beat Alls").

The setting of the show is mainly the city of Townsville, USA. Townsville is depicted as a major American city, with a cityscape consisting of several major skyscrapers. In his review of The Powerpuff Girls Movie, movie critic Bob Longino ofThe Atlanta Journal-Constitution said that, "the intricate drawings emanate 1950s futuristic pizazz like a David Hockney scenescape," and that the show is "one of the few American creations that is both gleeful pop culture and exquisite high art." As depicted in the opening sequence of each episode, the Powerpuff Girls were created by Professor Utonium in an attempt "to create the perfect little girl" using a mixture of "sugar, spice, and everything nice" (shown in respective fields of baby blue, light green, and pink). However, he accidentally spilled a mysterious substance called "Chemical X" into the mixture, creating, instead of the "perfect little girl", three girls (each possessing one of the above elements dominating her personality), and granting all three superpowers including flight, super strength, super speed, near invulnerability, x-ray vision, super senses, heat vision, and energy projection. In the original plot, the accidental substance was a can of "Whoop Ass", which was replaced by "Chemical X" in the aired version.

The three girls all have oval-shaped heads, abnormally large eyes (inspired by Margaret Keane's art[21]), stubby arms and legs, and lack noses, ears, fingers, necks, and flat feet with toes (McCracken preferred them to look more symbolic of actual girls rather than going for a realistic look, meaning fewer details were added.[22]). They wear dresses with black stripes that match the colors of their eyes, as well as white stockings and black Mary Janes. The closing theme to the cartoon offers a nutshell description of the three Powerpuff Girls' personalities: Blossom, commander and the leader. Bubbles, she is the joy and the laughter. Buttercup, she is the toughest fighter.

Blossom (voiced by Cathy Cavadini) is known for being the most intelligent one, as well as being the self-proclaimed leader of the Powerpuff Girls. Her personality ingredient is "everything nice", her signature color is pink, and she has long red hair with a red bow. She was named for having spoken freely and honestly to the Professor shortly after her creation as shown in the Powerpuff Girls Movie. She is often seen as the most level-headed, and composed member of the group and also strong and determined. Her unique power is freezing objects with her breath as seen in the episode "Ice Sore".

Bubbles (voiced by Tara Strong in the series and by Kath Soucie in the What-a-Cartoon! episodes) is the cute and sensitive one. Her personality ingredient is sugar, her signature color is blue, and she has short blonde hair in two pigtails. Bubbles is seen as kind and very sweet but she is also capable of extreme rage and can fight monsters just as well as her sisters can.[23] Her best friend is a stuffed octopus doll she calls "Octi", and she also loves animals. She exhibits the ability to both understand foreign languages (Spanish, Japanese) and communicate with various animals (squirrels, cats, monsters), and her unique power is emitting supersonic waves with her voice.

Buttercup (voiced by E.G. Daily) is the toughest of the three. Her personality ingredient is spice, her signature color is green, and she has short black hair in a bob. She is a tomboy, who loves to get dirty, fights hard, and plays rough, she does not plan and is all action.[23] Buttercup is the only Powerpuff Girl without a unique super power (aside from being able to curl her tongue as shown in the episode "Nuthin' Special").

In April 2005, plans for a Japanese anime version, Demashita! Powerpuff Girls Z, were announced. The series premiered in Japan the following year with 52 half-hour episodes, airing each Saturday from July 1 to December 23, 2006, and from January 6 to June 30, 2007. The series deviated from its American predecessor in terms of style, storyline, and characterization, but only minimally retained the essential themes that made the original a success. An English version has also been produced by Ocean Studios in Vancouver, Canada and has been broadcast onCartoon Network Philippines and Boomerang Australia. A manga adaptation, illustrated by Shiho Komiyuno, was serialized in Shueisha's Ribon magazine between June 2006 and July 2007.

Another manga series called PowerPuff Girls Doujinshi was created in 2004 and released through Snafu Comics. The girls are shown to be a bit older than, but with the same personalities as their T.V. counterparts, and combines characters from other cartoon shows. The story has the girls now going to school in the neighboring city of Townsville known as Megaville. The comic was the "Outstanding Superhero Comic" and "Outstanding Character Art" winner on the Web Cartoonist's Choice Awards in 2005.