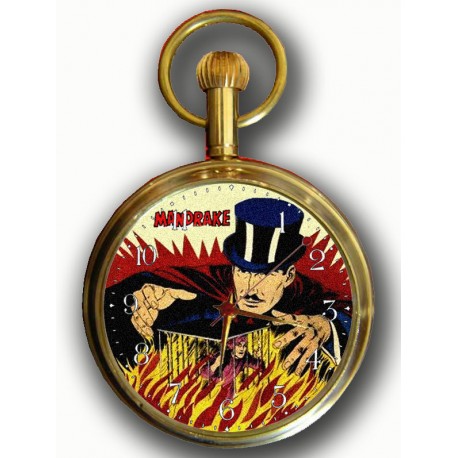 Mandrake is a magician whose work is based on an unusually fast hypnotic technique. As noted in captions, when Mandrake "gestures hypnotically", his subjects see illusions, and Mandrake has used this technique against a variety of villains including gangsters, mad scientists, extraterrestrials, and characters from other dimensions.

Lothar is Mandrake's best friend and crimefighting companion.[4] Mandrake first met Lothar during his travels in Africa. Lothar was "Prince of the Seven Nations", a mighty federation of jungle tribes; but forbore to become king and instead followed Mandrake on his world travels. Lothar is often referred to as "the strongest man in the world", with the exception of Hojo — Mandrake's chef and secret chief of Inter Intel.

One of the first African crimefighting heroes ever to appear in comics, Lothar made his first appearance alongside Mandrake in 1934 in the inaugural daily strip. In the beginning, Lothar spoke poor English and wore a fez, short pants, and a leopard skin. When artist Fred Fredericks took over in 1965, Lothar spoke correct English and his clothing changed, although he often wore shirts with leopard-skin patterns.

Narda is Princess of the European nation Cockaigne (ruled by her brother Segrid). She made her first appearance in the second Mandrake story. Although she and Mandrake were infatuated with one another, they did not marry until 1997, at which occurred extravagant triple wedding ceremony—at Mandrake's home of Xanadu, Narda's home country Cockaigne, and Mandrake's father Theron's College of Magic (Collegium Magikos) in the Himalayas.

Theron is Mandrake's father and headmaster of the College of Magic (Collegium Magikos) located in the Himalayas. Theron is hundreds of years old and may be kept alive by the Mind Crystal of which he is the guardian.

Hojo is Mandrake's chef at his home of Xanadu, and the secret Chief of the international crimefighting organization Inter-Intel, in addition to being a superb martial arts expert. As such, he has used Mandrake's help with many cases. Hojo's assistant at Inter-Intel is Jed.

The Police Chief is named Bradley but mostly called "Chief" and has been aided by Mandrake on several occasions. He created the "S.S.D." (Silly Stuff Dept.) for absurd and unbelievable cases that only Mandrake could solve. He has a son, Chris.

Magnon is Mandrake's most powerful friend and the emperor of one million planets. Magnon and his wife Carola have a daughter, Nardraka, who is named after Mandrake and Narda and is their godchild.

Lenore is Mandrake's younger half-sister. She is a world-renowned explorer.

Karma is Lothar's girlfriend, an African princess who works as a model.

The Cobra is Mandrake's most evil and dangerous foe, apparent from the start of the story. In 1937, the Cobra was apparently defeated; but returned in 1965, wearing a menacing silver mask. The Cobra's main goal is to acquire one of the two powerful Crystal Cubes which increase mental energy. These are guarded by Mandrake and his father Theron. Mandrake learned that The Cobra was secretly Luciphor, Theron's oldest son and thus Mandrake's half-brother. In later years, the Cobra abandoned his silver mask as his face had been reconstructed through surgery. He is sometimes accompanied by his assistant Ud.

Derek is Mandrake's twin brother, and although similar to Mandrake in appearance, uses his magical powers (nearly the equal of Mandrake's) to achieve short-term personal satisfactions. Mandrake has tried to remove Derek's knowledge of magic; but has never entirely succeeded. Derek has a son, Eric (mother unknown), who has shown no signs of following in his father's footsteps.

The Clay Camel, real name Saki, is a master of disguise, able to mimic anyone and change his appearance in seconds. His name comes from the symbol he leaves at the scenes of his crimes, a small camel made of clay.

The Brass Monkey, daughter of the Clay Camel, with a similar talent for disguises.

Aleena the Enchantress is a former friend of Mandrake's from the College of Magic, a much-married spoilt temptress who uses her magic powers for her own benefit. She sometimes attempts to seduce Mandrake; but fails, and thereafter attempts to cause him trouble.

8 is an old and very powerful crime organization originating in medieval times. They are known to often incorporate the number 8 in their crimes or leave the number 8 as a mark. They are organized like an octopus with eight arms (headquarters) spread all over the world, and one head (the mysterious leader Octon, only shown as a menacing image on a computer screen). Over the years, Mandrake destroys their headquarters one by one. In one of the stories the Octon of 8 is revealed as Cobra; but the name later referred to an artificial intelligence wielded by Ming the Merciless in the television series Defenders of the Earth.

Ekardnam ('Mandrake' backwards) is Mandrake's "evil twin", who exists on the other side of the mirror. Like his world (where the government is run by the "Private of the Armies", and generals do menial work), Ekardnam is an exact opposite, and uses his "evil eye" to work his magic.

The Deleter is an extraterrestrial contract killer who will "delete" anyone for a price, but will inflict justice on anyone who tries to cheat him out of his contract fee.