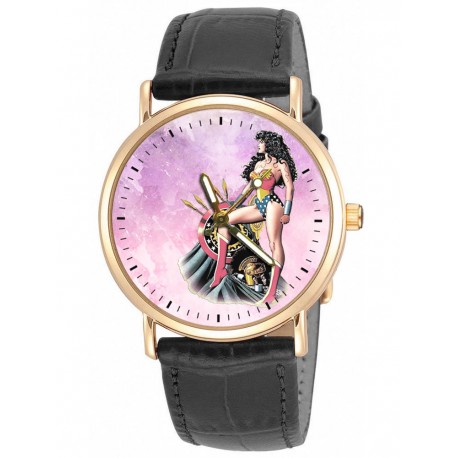 Wonder Woman is a warrior princess of the Amazons (based on the Amazons of Greek mythology) and is known in her homeland as Diana of Themyscira. She is gifted with a wide range of superhuman powers and superior combat and battle skill. Also well-known is her arsenal of weapons, such as the Lasso of Truth, a pair of indestructible bracelets, a tiara which serves as a projectile, and, in some stories, an invisible airplane.

Created during World War II, the character was initially depicted fighting the Axis military forces, as well as an assortment of supervillains. Since then, Wonder Woman has earned a formidable cast of enemies bent on eliminating the Amazon such as classic villains like Cheetah, Ares and Circe and newer ones like Genocide, The Circle and many gods and monsters from Greek mythology . Wonder Woman has also regularly appeared in comic books featuring the superhero teamsJustice Society (from 1941) and Justice League (from 1960).

In addition to the comics, the character has appeared in other media; most notably, the 1975–1979 Wonder Woman TV series starring Lynda Carter, as well as animated series such as the Super Friends and Justice League. Although a number of attempts have been made to adapt the character to live-action film, none have yet emerged from development hell. An animated film was released in 2009, with Keri Russell voicing the title role. In 2011, Adrianne Palicki starred in the TV series pilot of Wonder Woman that did not get picked up due to "scheduling issues". In September 2012, it was revealed that CW, the creator of popular Superman show Smallville, was developing a potential Wonder Woman origin TV series titled "Amazon".[3] Wonder Woman has also appeared in the form of a variety of toys, merchandise and pin-ups.dit]Publication History

In an October 25, 1940 interview with the Family Circle magazine, William Moulton Marston discussed the unfulfilled potential of the medium.[4] This article caught the attention of comics publisherMax Gaines, who hired Marston as an educational consultant for National Periodicals and All-American Publications, two of the companies that would merge to form DC Comics. At that time, Marston decided to develop a new superhero. Family Circle published a follow-up article two years later from issue of the Boston University alumni magazine, it was Marston's wife Elizabeth's idea to create a female superheroine:

William Moulton Marston, a psychologist already famous for inventing the polygraph (forerunner to the magic lasso), struck upon an idea for a new kind of superhero, one who would triumph not with fists or firepower, but with love. "Fine," said Elizabeth. "But make her a woman."

Marston introduced the idea to Gaines, co-founder of All-American Publications. Given the go-ahead, Marston developed Wonder Woman with Elizabeth, whom Marston believed to be a model of that era's unconventional, liberated woman.[6] Marston was also inspired by Olive Byrne, who lived with the couple in a polygamous/polyamorous relationship. Both women served as exemplars for the character and greatly influenced the character's creation. Wonder Woman debuted in All Star Comics #8 (December 1941)[8], scripted by Marston and with art by Harry G. Peter.

Marston was the creator of a systolic-blood-pressure-measuring apparatus, which was crucial to the development of the polygraph (lie detector). Marston's experience with polygraphs convinced him that women were more honest and reliable than men and could work more efficiently.

"Wonder Woman is psychological propaganda for the new type of woman who should, I believe, rule the world," Marston wrote. Although Gloria Steinem placed Wonder Woman on the first standalone cover of Ms. in 1972, Marston, writing in an earlier time, designed Wonder Woman to represent a particular form of female empowerment.

In a 1943 issue of The American Scholar, Marston wrote:

Not even girls want to be girls so long as our feminine archetype lacks force, strength, and power. Not wanting to be girls, they don't want to be tender, submissive, peace-loving as good women are. Women's strong qualities have become despised because of their weakness. The obvious remedy is to create a feminine character with all the strength of Superman plus all the allure of a good and beautiful woman. During this period, Wonder Woman joined the Justice Society of America as the female member.

Initially, Wonder Woman was an Amazon champion who wins the right to return Steve Trevor — a United States intelligence officer whose plane had crashed on the Amazons' isolated island homeland — to "Man's World" and to fight crime and the evil of the Nazis.

During the Silver Age, under then-writer Robert Kanigher, Wonder Woman's origin was revamped, along with other characters'. The new origin story increased the character's Hellenic and mythological roots: receiving the blessing of each deity. Diana is destined to become "beautiful as Aphrodite, wise as Athena, as strong as Hercules, and as swift as Hermes."

At the end of the 1960s, under the guidance of Mike Sekowsky, Wonder Woman surrendered her powers in order to remain in Man's World rather than accompany her fellow Amazons to another dimension. Becoming a mod boutique owner, the powerless Diana Prince acquired a Chinese mentor named I Ching. Under I Ching's guidance, Diana learned martial arts and weapons skills and engaged in adventures that encompassed a variety of genres, from espionage to mythology.

In the early 1970s the character returned to her superhero roots in Justice League of America and to the World War II era in her own title.

Following the 1985 Crisis on Infinite Earths series, George Pérez, Len Wein, and Greg Potter relaunched the character, writing Wonder Woman as an emissary and ambassador from Themyscira to Patriarch's World, charged with the mission of bringing peace to the outside world. Pérez incorporated a variety of deities and concepts from Greek mythology in Wonder Woman's stories and origin. His relaunch of the character acted as the foundation for the more modern Wonder Woman stories as he expanded upon the widely-accepted origin of Diana being birthed out of clay and also the origin of Diana's powers being blessings from the Greek deities was created during this run. This relaunch was a critical and commercial success.

In August 2010 (issue #600), J. Michael Straczynski took over the series' writing duties and introduced Wonder Woman to an alternate timeline created by the Gods in which Paradise Island had been destroyed and the Amazons being scattered around the world.[22] In this timeline, Diana is an orphan raised in New York who is learning to cope with her powers. The entire world has forgotten Wonder Woman's existence and the main story of this run was of Diana trying to restore reality even though she does not properly remember it herself. A trio of Death Goddesses called the Morrigan acted as the main enemy of Wonder Woman. In this run, Wonder Woman wore a new costume designed by Jim Lee.[25] Straczynski determined the plot and continued writing duties till Wonder Woman #605. Writer Phil Hester then continued his run, which ultimately concluded in Wonder Woman #614.

In 2011, DC Comics relaunched its entire line of publications to attract a new generation of readers. Brian Azzarello and Cliff Chiang were assigned on writing and art duties respectively and revamped the character's history considerably. In this new continuity, Wonder Woman wears a costume similar to her original costume. Her origin is significantly changed and she is no longer a clay figure brought to life by the magic of the gods; instead, she is a demigoddess, the natural-born daughter of Hippolyta and Zeus. Azzarello and Chiang's revamp of the character was critically acclaimed.