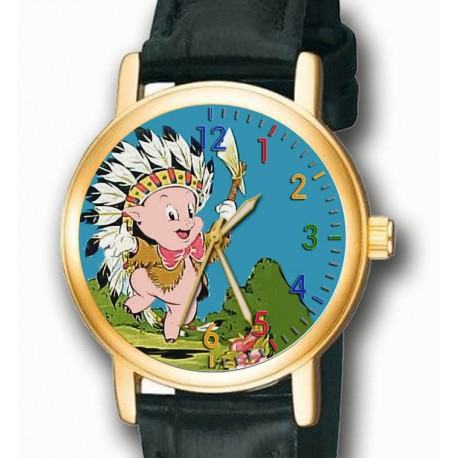 Porky Pig is an animated cartoon character in the Warner Bros. Looney Tunes and Merrie Melodies series of cartoons. He was the first character created by the studio to draw audiences based on his star power, and the animators (particularlyBob Clampett) created many critically acclaimed shorts using the fat little pig. Even after he was supplanted by later characters, Porky continued to be popular with moviegoers and, more importantly, the Warners directors, who recast him in numerous everyman and sidekick roles. He is known for his signature line at the end of each short, "Th-th-th-that's all folks!" The slogan had also been used by both Bosko and Buddy and even Beans at the end of every Looney Tunes cartoon. In contrast, the Merrie Melodies series used the slogan: So Long, Folks! until the late 1930s when it was replaced with the same one used on the Looney Tunes series. (When Bugs Bunny was the closing character, he would break the pattern by simply saying, in his Brooklynese accent, "And Dat's De End!"). He is the oldest continuing Looney Tunes character.

Porky's most distinctive trait is a severe stutter, for which he sometimes compensates by replacing his words; for example, "What's going on?" might become "What's guh-guh-guh-guh—...what's happening?" In the ending of many Looney Tunescartoons, Porky Pig bursts through a bass drum head, and his farewell line "That's all folks!" becomes "Th-Th-Th-Th-Th-... That's all, folks." Porky Pig would appear in 152 cartoons in the Golden Age of American animation.

The character was designed by animator Bob Clampett and introduced in the short I Haven't Got a Hat (first released on March 9, 1935), directed by Friz Freleng. Studio head Leon Schlesinger suggested that Freleng do a cartoon version of the popular Our Gang films. Porky only has a minor role in the film, but the fat little stuttering pig quickly became popular. Porky's name came from two brothers who were childhood classmates of Freleng's, nicknamed "Porky" and "Piggy".

Since Hugh Harman and Rudolf Ising had left the studio in 1933, taking the studio's star character Bosko with them, Looney Tunes had been kept afloat by cartoons featuring the bland Buddy. Porky's introduction ushered Buddy out the door and pointed to things to come. Tex Avery was hired to the studio in 1935, and his film Gold Diggers of '49 reused much of the cast from I Haven't Got a Hat, albeit in wildly different roles. Porky transitioned from a shy little boy to an immensely fat adult. Though he was still in a supporting role, Porky got most of the laughs. The directors realized they had a star on their hands.

Porky shared his stutter with the voice actor who originally played him, Joe Dougherty, who actually did have a stuttering problem. Because Dougherty could not control his stutter, however, production costs became too high and his recording sessions took hours. The versatile Mel Blanc replaced Dougherty in 1937. Blanc continued the stutter; however, it was harnessed for a more precise comedic effect (such as stumbling over a simple word only to substitute a longer word without difficulty). This is parodied in A Connecticut Rabbit in King Arthur's Court, where Bugs Bunny struggles to pronounce the word "porcupine", which Porky pronounces with no trouble.

Porky's Duck Hunt was released in 1937, and Blanc officially became the permanent voice of Porky until his death in 1989. In later interviews, Blanc often made the claim that he intended Porky's stutter to be suggestive of the grunting of actual pigs (although other cartoon pigs do not have such a severe stuttering problem). Porky is currently voiced by Bob Bergen. Porky starred in dozens of films in the late 1930s. The directors still did not have a grasp on the character, however; his appearance, age, and personality all varied from picture to picture. Several such cartoons show Porky as a child with parents: father Phineas (Porky the Rainmaker, Milk and Money, Porky's Poppa, and Porky and Teabiscuit) and an unnamed mom (Wholly Smoke and Porky's Hero Agency). Bob Clampett finally pinned Porky down, making him a permanent young adult: cuter, slimmer, smarter, and eventually less of a stutterer. Also, some cartoons show Porky as an antagonist (Porky's Duck Hunt, Porky's Hare Hunt, My Favorite Duck, A Corny Concerto, Duck Soup to Nuts, Daffy Doodles, Daffy Duck Slept Here, Daffy Duck Hunt, Boobs in the Woods, Thumb Fun and Cracked Quack). Eventually, he settled into a kind persona. Clampett's Porky was an innocent traveler, taking in the wonders of the world—and in Clampett's universe, the world is a very weird place indeed. This principle is perhaps best demonstrated in Porky in Wackyland, a film that sends Porky on a quest to find the last of the Dodos. This cartoon was selected for preservation by the National Film Registry in 2000.

In his commentary as part of the 1970s documentary film, Bugs Bunny: Superstar, Clampett discussed the fact that his early version of Tweety Bird had to be redesigned after his first picture because the producers thought he "looked naked". Meanwhile, as Clampett noted, nothing was ever made of the fact that "all those years, Porky never wore any pants!" However, Porky was seen with pants in Porky's Badtime Story and its color remake, Tick Tock Tuckered.

Porky as a sidekick

Porky's post at the pinnacle of the Warners' pantheon was short-lived however. In 1937, Avery pitted Porky against a plucky black duck who soon was christened Daffy and who became the studio's biggest star (until he himself was replaced by Bugs Bunny). In fact, Friz Freleng satirized this phenomenon when he directed You Ought To Be in Pictures (1940). The film features Daffy convincing Porky to quit his job at Warner Bros. to find better-paying work elsewhere. In turn, Porky convinces studio head Leon Schlesinger to release him from his contract. After a highly unsuccessful foray into the real world, Porky returns happily to the studio that created him. To this day, Porky remains as a loyal sidekick while Daffy refuses to be a second banana to Bugs.

Porky always remained a sentimental favorite of the Warner directors. His mild-mannered nature and shy demeanor made him the perfect straight man for zanier characters such as Daffy. He still starred in a few solo cartoons as well, such as Frank Tashlin's Swooner Crooner.

Other cartoons dumbed Porky down and cast him as a duck hunter after Daffy, largely paralleling the Elmer Fudd/Bugs Bunny pairings. Chuck Jones perfected the Porky-as-straightman scenarios, pairing the pig with Daffy Duck in a series of film parodies such as Drip-Along Daffy, Duck Dodgers in the 24½th Century, Deduce, You Say!, and Robin Hood Daffy. Jones also paired Porky with Sylvester in a series of cartoons in the late 1940s and early 1950s, in which Porky plays the curmudgeonly owner of the cat and remains clueless that Sylvester is constantly saving him from homicidal mice, space aliens, and other threats.