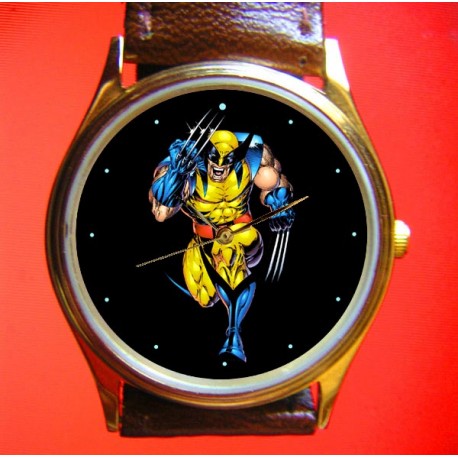 Wolverine was born as James Howlett in Alberta, Canada, in the late 1880s, to rich farm owners John and Elizabeth Howlett. As the Origin miniseries insinuates and the Wolverine Goes to Hell story fully reveals, however, he is actually the illegitimate son of the Howlett's groundskeeper, Thomas Logan. After being thrown off of the Howlett's property for violent actions perpetrated by his other son, named simply Dog, Thomas returns to the Howlett manor and kills John Howlett. In retaliation, young James kills Thomas with bone claws that emerge from the back of his hands and is cast out by his mother (who then kills herself).[26] His grandfather sends him away with his childhood companion, Rose (who closely resembles Jean Grey). The character grows into manhood on a mining colony in the Yukon Territory, adopting the name "Logan." After accidentally killing Rose with his claws, Logan leaves the colony and lives for a time in the wilderness among wolves[28] until returning to civilization, residing with the Blackfoot Indians. Following the death of his Blackfoot lover, Silver Fox, at the hands of Sabretooth,[29] he is ushered into the Canadian military during World War I. Logan then spends some time in Madripoor, before settling in Japan, where he marries Itsu and has a son, Daken.

During World War II, Logan teams up with Captain America[30] and continues a career as a soldier-of-fortune/adventurer. He then serves with the 1st Canadian Parachute Battalion[31] during D-Day, and the CIA, before being recruited by Team X, a black ops unit.

As a member of Team X, Logan is given false memory implants. He continues on the team, until he is able to break free of the mental control and joins the Canadian Defense Ministry. Logan is subsequently kidnapped by the Weapon X program, where he remains captive and experimented on, until he escapes, as shown in Barry Windsor-Smith's "Weapon X" storyline which ran in Marvel Comics Presents. It is during his imprisonment by Weapon X that he has unbreakable adamantium forcibly fused onto his bones.

Logan is eventually discovered by James and Heather Hudson, who help him recover his humanity. Following his recovery, Logan, this time under the supervision of Department H, once again works as an intelligence operative for the Canadian government. Logan becomes Wolverine, one of Canada's first superheroes. In his first mission, he is dispatched to stop the destruction caused by a brawl between the Hulk and the Wendigo.

Later on, Professor Charles Xavier recruits Wolverine to a new team of X-Men. Disillusioned with his Canadian intelligence work and intrigued by Xavier's offer, Logan resigns from Department H. It was later revealed, however, that Professor X had wiped Logan's memories and forced him to join the X-Men after Wolverine was sent to assassinate Xavier.[34]

In X-Men #25 (1993), at the culmination of the "Fatal Attractions" crossover, the supervillain Magneto forcibly removes the adamantium from Wolverine's skeleton. This massive trauma causes his healing factor to burn out and also leads to the discovery that his claws are actually bone. Wolverine leaves the X-Men for a time, embarking on a series of adventures during which his healing factor returns, greatly increased in speed and efficiency (due to the fact that the adamantium in his bones used a considerable amount of his healing factor on a constant basis). It is also realised at this time that Wolverine constantly mutates (unlike other mutants) and that the adamantium slowed his mutation to a halt. His natural abilities such as healing factor and animalistic senses increase slowly over time. Feral by nature, Wolverine's mutation process will eventually cause him to degenerate physically into a more primitive, bestial state. After his return to the X-Men, Cable's son Genesiskidnaps Wolverine and attempts to re-bond adamantium to his skeleton. This is unsuccessful and causes Wolverine's mutation to accelerate out of control. He is temporarily changed into a semi-sentient beast-like form in which he gains greater physical power than ever before, at the price of part of his humanity. Eventually, the villain Apocalypse captures Wolverine, brainwashes him into becoming the Horseman Death, and successfully re-bonds adamantium to his skeleton. Wolverine overcomes Apocalypse's programming and returns to the X-Men.

In 2005, author Brian Michael Bendis had Wolverine join the Avengers. After the miniseries House of M, Wolverine regains his memories and prepares to seek out and enact vengeance on those who wronged him. In Wolverine: Origins, the character's second solo series, Wolverine discovers that he has a son named Daken, who has been brainwashed and made a living weapon by the villain Romulus, the man behind Wolverine's own brainwashing. Wolverine then makes it his mission to rescue Daken and stop Romulus from manipulating or harming anyone again.

During the events of the Messiah Complex storyline, Cyclops orders Wolverine to reform X-Force. Since then, Wolverine and the team (initially consisting of X-23, Warpath, and Wolfsbane) have starred in a new monthly title. The team was also featured in the "Messiah War" storyline, a sequel to Messiah Complex. After the events of Second Coming, Cyclops ends the X-Force program, but Wolverine continues a new X-Force team in secrecy with Angel/Archangel, Psylocke, Deadpool and Fantomex.

In 2008, writer Mark Millar and artist Steve McNiven explored a possible future for Wolverine in an eight-issue story arc entitled "Old Man Logan" that debuted with Wolverine #66. Millar, the writer for the story, said, "It's The Dark Knight Returns for Wolverine, essentially. The big, wide, show-stopping series that plays around with the most popular Marvel character of the last forty years, a dystopian vision of the Marvel Universe and a unique look at their futures. The heroes have gone, the villains have won and we're two generations away from the Marvel we know."

In X-Men #5, it is revealed that in order for Wolverine to fully infiltrate the ranks of the vampires that were attacking Utopia at the behest of Dracula's son (when Wolverine thought the vampire virus had simply bested his healing factor), Cyclops has to infect him with nanites that are capable of shutting off Wolverine's healing factor. Cyclops can activate them by merely clicking a button on a remote control device he carries with him at all times.