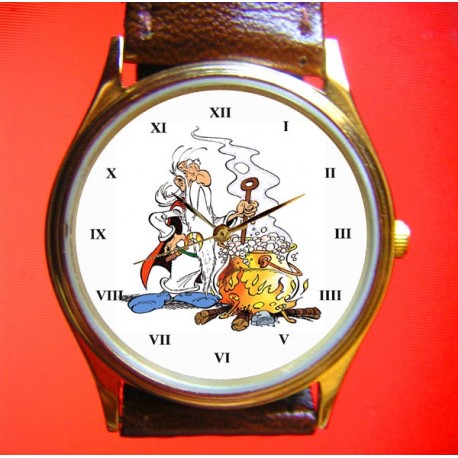 Getafix is the village druid. In appearance he is tall with a white beard, white robe, red cloak. He is usually seen in possession of a small golden sickle. While his age is never stated, in the story of Asterix's birth (in which all but the oldest villagers are seen as small children) he appears unchanged. In Asterix and the Big Fight the druid Psychoanalytix (who appears quite old) refers to him as his elder and teacher. In Asterix and Obelix's Birthday: The Golden Book, as a gag, Getafix at age 50 appears to be frail and old while in the other books he appeared healthy. In Asterix and the Goths while on the annual conference to show his potion he said. I need a frail druid and that druid appeared to have a walking stick which Getafix did not need despite his long beard.

Although known for his strength-enhancing magic potion, he has many other magical and medicinal potions at his disposal — including a potion to make hair grow quickly, a potion to cure a man who has been poisoned with a drug that would kill him in a matter of days, and a potion that restores a person to full health after injury (although this potion also causes the person who takes it to lose their recent memories while also interacting badly with the magic potion) — and acts as the village doctor and occasional teacher. Asterix (and most other villagers) will consult him whenever anything strange occurs. He does not engage normally himself in combat, whereas most of the villagers enjoy a good punch-up (even with each other). One exception is one of the stories explaining Gaulish women, using Mrs. Geriatrix as an example, in which he involves himself in a fight sparked by Impedimenta. The final cut is shown with all the male villagers and two females, Impedimenta and Bacteria included, with Getafix running to stop the fight, with a piece of fish flying towards him. His most notable brawl is when, masquerading as a cook in The Great Divide, he makes a magic potion (passing it off as soup) to free the enslaved men from the divided village, captured by the Romans — and doing a test run on the slaves who were present — and then starts distributing slaps with obvious enjoyment.

As the only individual able to produce the "magic potion" upon which the villagers rely for their strength, he is the focus of many stories ranging from the Romans attempting to put him out of commission in some manner to requesting that Asterix and Obelix help him find some missing ingredient-, and the conscience of the village. On a few occasions, he has refused to make the potion when the villagers become too selfish, most notably in Asterix and Caesar's Gift where he refused to provide the potion for anyone while the village was divided by an upcoming vote for a new chief, only to provide them with it once again when Vitalstatistix asked Getafix to provide the potion for Orthopedix, the man he had been running against for chief. He has also occasionally been taken prisoner by hostile forces to get access to the potion, only to be freed again thanks to Asterix and Obelix. Finding ingredients for his potions has also sent Asterix on several adventures. The full recipe of the magic potion itself has never been revealed, but known ingredients are mistletoe (which must be cut with a golden sickle), a whole lobster (an optional ingredient that improves the flavour), fish, salt, and petroleum (called rock oil in the book), which is later replaced by beetroot juice. Replenishing the stores of ingredients for the magic potion has led to some adventures for Asterix and Obelix, including Asterix and the Great Crossing, Asterix and the Golden Sickle and Asterix and the Black Gold.

Getafix is very similar to many wise old men who act as mentors and father-figures to the heroes, including Merlin, Gandalf, Obi-Wan Kenobi and Albus Dumbledore. In Goscinny's earlier works, however, Getafix came across more as just a friend of the protagonists rather than a wise old counselor. He was also, from the very beginning, shown as a figure of fun and had a wonderful sense of humour: in Asterix the Gaul he'd cut his finger while using his sickle and roar with uncontrollable laughter at Asterix's teasing of the Roman Centurion; in Asterix and the Big Fight he was shown as going literally crazy.