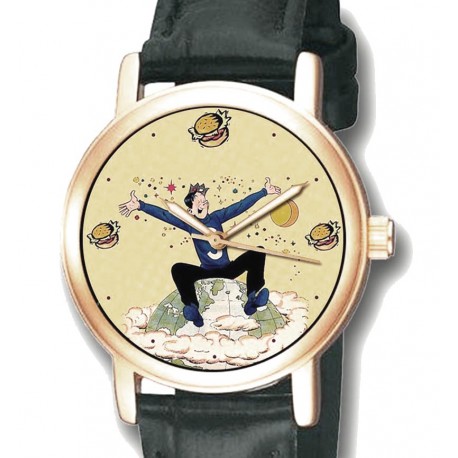 Jughead Jones is a fictional character in Archie Comics who first appeared in the comic in December 1941. He is the son of Forsythe II; although in one of the early Archie newspaper comic strips, he himself is identified as Forsythe P. (Pendleton) Jones III. He has a white sheepdog named Hot Dog and a younger sister, Forsythia "Jellybean" Jones.

Jughead (sometimes shortened to Jug or Juggie) is the best friend of Archie Andrews. He is seen as lazy, obsessed with food, and generally uninterested in girls. He stands at 6 ft (1.8 m) and 140 lbs (64 kg) and can be identified by his long nose, half-closed eyes, "S" sweatshirt, and crown-like button beanie hat.[1] His name in the Spanish version of the comic is Torombolo.

Jughead generally has a characteristic wry and sarcastic sense of humor. He is considered a bit of an oddity, but prefers his nonconformism as opposed to going along with others styles. His many quirks make him the butt of teasing and abuse from Reggie, Veronica, and even other classmates and teachers. Many episodes involve Reggie and Jughead trying to outdo one another with pranks and bets, and Jughead almost always comes out the victor. He is revealed to be extremely clever and creative when necessary and he often takes advantage of Reggie's and his other tormentors' weaknesses (and has fun all the while).

In the earlier comics, a running gag involved various characters trying to discover Jughead's real name, while Jughead thwarted their efforts. In one story, Archie Andrews and Reggie Mantle go to the school office, where a woman tells them that Jughead's real first name is Steve. After Archie and Reggie leave the office, the audience learns that the woman is actually Jughead's aunt who has just lied as a favor to Jughead to help keep his real first name (Forsythe) hidden. He is named after his ancestor who is an American hero. For a brief time, Jughead started to use his given name in honor of his ancestor. After learning that this ancestor was married nine times, Jughead reverted to his nickname. In the Little Archie series, his real name is revealed by Miss Grundy at the start of class.

Another mystery that follows Jughead's character is the meaning of the "S" on his sweatshirt. This remains a mystery to this day, although many stories have hinted at a meaning. In Jughead #30 (1992), when his psychiatrist, Sara, asked him "why an 'S'?" he replied "I dunno! My third cousin was called skinny..." Recently, the triangular banner on the cover of issue 140 of Archie & Friends shows that the "S" stands for Silby, as in Silby high school. At one time after his sweater was filled with holes due to what he thought was a moth when it was actually a chemical accident caused in lab class, he simply reveals that the S on his sweater stands for "soup, sandwich, steak and all kinds of goodies!" after his friends ask him.

Jughead is known for his ability to consume unusually high quantities of food in a single sitting without getting sick or gaining weight (although he sometimes sports a potbelly after particularly large meals). Jughead is a preferred customer of most of Riverdale's food establishments, especially Pop Tate's Chocklit Shoppe, except when he is unable to pay his tabs. In one story, he was given a "Restaurant Club Card" and ate out on high-class foods. However, when he found out how much interest the card charged, Pop Tate loaned him the money on the condition that he eat only at the Chocklit Shop.

Jughead's love of food has given him heightened senses. He can identify food in a can by smell without opening it. His taste buds can detect the slightest flaws in prepared food. As such, he is a respected food critic, as well as a gourmet cook himself. Once, when he sought out Miss Grundy's help as he dabbled in creative writing, she suggested that he write about what he knew. The result was his "Forsythe P. Jones Cookbook". In another story, Betty asked Jughead to give the owner of the ice cream shop where she worked some pointers on how to improve the shop's products.

Jughead’s ability to eat so much without gaining weight is attributed to a very rare and realistically implausible metabolism. One reference to this was in one issue, in which a gym hired him to show people how to stay as fit as he was. Unfortunately, his metabolism proved to be unique, so everyone else at the gym simply gained weight. Jughead once claimed that he weighed 300 pounds after a meal.

Jughead frequently participates in eating contests. Once, students from an adjacent town's high school challenged Riverdale to an eating contest, pitting their chubby undefeated champion against Jughead. Jughead handily beat the other guy, with room for more food. In a citywide eating contest, he had to eat a colossal burger made up of sixteen different burgers. Jughead also set two world records for eating pizza; one for speed-eating a pizza, and one for eating the most pizzas in one sitting—twelve.

His appetite is so large that even if he eats before such contests, he is rarely too full to compete. For example, Riverdale’s rival high school once sent a girl, Jane Dough, to take Jughead to various restaurants and feed him as much as possible. Amazingly, Jughead still managed to win the contest. Jughead explained to her that top athletes need to constantly train in order to stay in shape. In actuality, Jane helped him "train" for the eating contest when they went out.

However, close analysis reveals that he is not selfish when it comes to food. Once, after spending his allowance on a large bag of sweets, he met a young boy outside the store who couldn't afford any. Reluctantly, Jughead gave the boy his bag, but felt better for it afterwards, when he saw how happy the candy made the boy. In a similar story, Jughead met a homeless person who liked the same kind of pizza as him, and decided to give him the pizza he had just purchased. In another, after winning three pizzas a week for six months for being a pizzeria's millionth customer, he donates it all to a soup kitchen where he volunteers.

One running gag is his visiting restaurants that promise "all you can eat" specials. The luckless restaurant closes shortly thereafter.

Jughead is almost always seen wearing his trademark crown hat. This type of crown-shaped cap was popular among boys in the 1930s and 1940s. It was made from a man's felt fedora hat with the brim trimmed in a zig-zag and turned up. Bottle caps could be 'pinned' in place using the cap's removable cork lining. In the 1920s and 1930s, such caps usually indicated the wearer was a mechanic.[3] Similar caps appeared on The Andy Griffith Show (worn by Goober Pyle) and in Death Wish (worn by Jeff Goldblum as Freak #1). Jughead's hat was recolored in black in theFilmation cartoons and pink in The New Archies.

Though some view the hat as strange and immature, Jughead considers it a good luck charm and when it is taken from him, misfortune comes his way. While on the school baseball team, Jughead was pulled aside and reprimanded by school principal Mr. Weatherbee for wearing the hat instead of a proper baseball uniform cap. Jughead complied, but then started performing so badly that Weatherbee was forced to relent.

In the "Time Police" comic, his beanie is a device that allows him to travel in time.

Jughead's best friend is Archie Andrews, despite their personality difference. Archie was the first person that Jughead met upon moving to Riverdale, and he is often dragged into Archie's schemes and antics. Jughead is usually the first one to bail Archie out of trouble (though some times he only makes things worse). Jughead, extremely loyal, is willing to do almost anything to help his friend, something that Archie occasionally takes for granted.

Reggie is another one of Jughead's close friends, though his and Jughead's relationship is defined by their constant competition. Reggie never loses an opportunity to insult Jughead ("needle-nose" being his favorite nickname) and Jughead often responds with tricks to aggravate Reggie. Though it often appears they hate each other, and neither will admit otherwise, they really do care for one another. Jughead will even help Reggie escape being injured when Moose Mason is angry with him.

While Jughead is generally uninterested in girls, he does have a soft spot for Betty Cooper. Betty is a great cook, which is one of the reasons that he loves to hang out with her, and the two are generally open to each other about their feelings. Jughead also provides a shoulder to cry on whenever Betty has trouble with Archie or Veronica. One of the few things Jughead does not like about Archie is how he takes Betty for granted. Many people interpret their relationship as a potential romance (see below). They seem to have crushes on each other in many comics and in the Archie show.

Jughead and Veronica Lodge are constantly arguing. Veronica cannot stand his laid-back attitude witticisms, and Jughead enjoys teasing her and making her lose her temper with clever comebacks. Although at times, he relishes in causing her to get angry because sometimes he sees her as an uncaring selfish snob. He once told Veronica he was "mad with passion" for her, and began popping up wherever she went, to get her off his back after she criticized him publicly. They were once cast together in a school play, which required them to kiss. Due to the way Jughead kissed her, she was caught up in the moment and fell in love with him for a while. However, Jughead managed to get her over her crush, with the help of a garlic and onion sandwich.

Jughead's other friends include Dilton Doiley and Moose Mason. Other than Dilton, Jughead probably gets along with Moose better than the other boys because of his non-confrontational attitude. Jughead’s nerdy ways and lack of interest in sports and girls probably account for how well he gets along with Dilton.

Jughead's family includes his father, also named Forsythe, his mother Gladys and in later comics, his younger sister Jellybean. He also has many eccentric relatives including slightly-addled Uncle Herman, or "Doc Jones", a daffy and slightly pompous inventor whose creations usually wreak havoc on Jughead and/or his friends and his lookalike younger cousin, Souphead. Other one-time relatives appear frequently. Jughead also tells many stories of his ancestors, who prove to be quite as interesting as himself. A 1970s "Archie" cartoon episode featured Jughead's paternal grandparents—both of whom resemble Jughead.

In the "Mad Magazine" universe, Jughead's doppelgänger is nicknamed Bottleneck. Bottleneck wears a beanie that resembles a broken bottleneck. His best friend (and fellow juvenile delinquent) is Starchie.