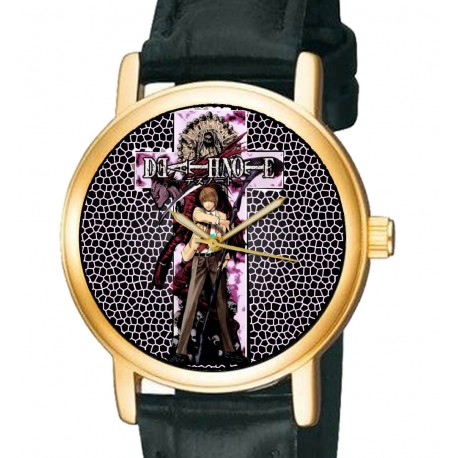 Death Note (デスノート Desu Nōto?) is a Japanese manga series created by writer Tsugumi Ohba and manga artist Takeshi Obata. The main character is Light Yagami, a high school student who discovers a supernatural notebook, the "Death Note", dropped on Earth by a shinigami (a god of death) named Ryuk. The Death Note grants its user the ability to kill anyone whose name and face they know, by writing the name in the notebook while picturing their face. The series centers around Light's attempt to create and rule a world "cleansed of evil" as "God" using the notebook, and the efforts of a detective known as L to stop him.

Death Note was first serialized in 108 chapters by Shueisha in the Japanese manga magazine Weekly Shōnen Jump from December 2003 to May 2006. The series was also published in tankōbon format in Japan starting in May 2004 and ending in October 2006 with a total of twelve volumes. The series was adapted into live-action films released in Japan on June 17, 2006, November 3, 2006, and February 2, 2008. The anime series aired in Japan from October 3, 2006, to June 26, 2007. Composed of 37 episodes, the anime was developed by Madhouse and directed by Tetsuro Araki. A light novel based on the series, written by Nisio Isin, was released in Japan. Additionally, various video games have been published by Konamifor Nintendo DS.

To date, it is the twenty fourth best selling manga series of all time from Shōnen Jump at total sales of 26.5 million copies.

Light Yagami is an intelligent young adult who resents all things evil. He also wishes to end crime in the world and create a utopia in which he reigns supreme. His life undergoes a drastic change when he discovers the Death Note, a notebook that contains five written instructions:

There are other rules that are revealed as the story develops, usually in the form of chapter title pages. After several experiments with the Death Note, Light realizes the notebook's authenticity and encounters the previous owner, a shinigamicalled Ryuk. Light explains to Ryuk his plan of exterminating all the criminals in the world, until there are only people who he has judged to be honest and kind. Once he finishes this, he will begin his reign as the god of this new world.

Soon, the number of inexplicable deaths of criminals catches the attention of the International Police Organization and the world-famous detective, "L". L quickly learns that the serial killer, publicly known as "Kira" (キラ?, derived from the Japanese pronunciation of the word "killer"), is located in Japan and can kill people without laying a finger on them. Light realizes that L will be his greatest nemesis, and begins a cat and mouse game with L.

Light attempts to create an alibi by helping L and his investigate team track down Kira. His plan is impeded by a second Kira, famous model Misa Amane, and her shinigami Rem. Misa and Light meet and work together, and become increasingly suspected by L. To save themselves from execution, Misa and Light temporarily relinquish control of their Death Notes—erasing their memories of the shinigami and the notebooks—and are placed under constant surveillance by L.

During their detention, a third Kira under the employ of the Yotsuba Group appears. Light and Misa are freed when it becomes apparent that they are not responsible for the murders of Yotsuba's rivals. The investigative team infiltrate Yotsuba and discover the third Kira is Yotsuba member Kyosuke Higuchi and attempt to capture him. Upon Higuchi's capture, Light regains ownership of the Death Note "just as [he] planned" and kills Higuchi, while the investigative team learn of the Death Notes and shinigami. Light completes his complex plan by manipulating Rem into killing both L and herself. Light becomes the "new L" upon L's death, and continues a charade of searching for Kira.

The narrative continues four years later, with Kira attracting a large network of contacts and a swell of public support. Two children, Near and Mello, raised by L's former guardian Watari to follow L's legacy, serve as antagonists to Light: Near as an independent detective; and Mello as a member of the Mafia. Mello's first action to oppose Kira is to kidnap the director of Japan's National Police Agency, and after his murder, Light's sister Sayu, to use as a bargaining chip to obtain the Death Note. Light's task force recapture Sayu and learn Mello's real name after Light's father Soichiro trades half of his remaining life to Ryuk for the ability to discover anyone's names, but Soichiro later dies of gunshot wounds.

Concurrently, Near and several members of the task force begin to suspect Light of being Kira. In response, Light persuades Misa to give up her Death Note and raises another "Kira", Teru Mikami, a prosecutor and fervent supporter of Kira. Mikami kills Kira's former spokesman for being greedy and recruits Kiyomi Takada, a newscaster and Light's former girlfriend, to replace him. Mello returns and kidnaps Kiyomi, who manages to kill Mello with a hidden Death Note piece. Light then makes Kiyomi commit suicide to prevent her from implicating him, but Mikami, unaware of Light's actions, attempts to kill her with his own Death Note. Near reveals that he replaced Mikami's notebook with a fake, and by the names written in it is able to prove Light is Kira. In desperation, Light tries to use the last Death Note piece in his watch to kill the rest of the task force, but Matsuda shoots him several times. Realizing Light has lost, Ryuk uses his Death Note to kill Light with a heart attack, which is a part of their original agreement.