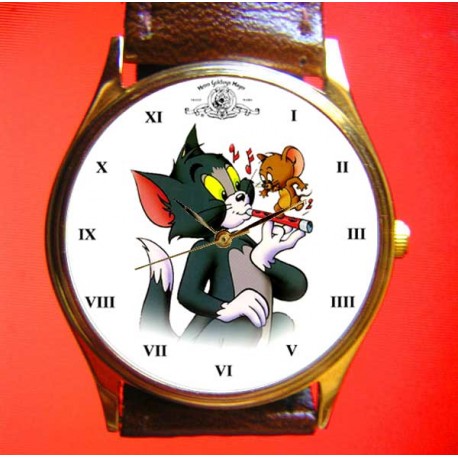 Tom and Jerry is a series of theatrical animated cartoon films created by William Hanna and Joseph Barbera for Metro-Goldwyn-Mayer, centering on a never-ending rivalry between a cat (Tom) and a mouse (Jerry) whose chases and battles often involved comic violence (despite this they sometimes become allies to defeat a 'greater enemy' such as Spike the bulldog). Hanna and Barbera ultimately wrote, produced and directed 114 Tom and Jerry shorts at the MGM cartoon studioin Hollywood between 1940 and 1957, when the animation unit was closed. The original series is notable for having won the Academy Award for Animated Short Film seven times, tying it with Walt Disney's Silly Symphonies as the theatrical animated series with the most Oscars. A longtime television staple, Tom and Jerry has a worldwide audience that consists of children, teenagers and adults, and has also been recognized as one of the most famous and longest-lived rivalries in American cinema. In 2000, TIME named the series one of the greatest television shows of all time.

Beginning in 1961, in addition to the original 114 Hanna-Barbera cartoons, MGM had new shorts produced by Rembrandt Films, led by Gene Deitch in Eastern Europe. Production of Tom and Jerry shorts returned to Hollywood under Chuck Jones's Sib-Tower 12 Productions in 1963; this series lasted until 1967, making it a total of 161 shorts. The cat and mouse stars later resurfaced in television cartoons produced by Hanna-Barbera Productions and Filmation Studios during the 1970s, 1980s, and 1990s; a feature film, Tom and Jerry: The Movie, in 1992 (released domestically in 1993); and in 2001, their first made-for TV short, Tom and Jerry: The Mansion Cat for Boomerang. The most recent Tom and Jerry theatrical short The Karate Guard (2005), was written and co-directed by Barbera.

The cartoons are infamous for some of the most violent cartoon gags ever devised in theatrical animation, such as Jerry slicing Tom in half, shutting his head in a window or a door, Tom using everything from axes, firearms, explosives, traps and poison to try to murder Jerry, Jerry stuffing Tom's tail in a waffle iron and a mangle, kicking him into a refrigerator, plugging his tail into an electric socket, pounding him with a mace, club or mallet, causing a tree or an electric pole to drive him into the ground, sticking matches into his feet and lighting them, tying him to a firework and setting it off, and so on.[1] Because of this, Tom and Jerry has often been criticized as excessively violent. Despite the frequent violence, there is no blood or gore in any scene. The series features comedic fights between an iconic set of enemies, a house cat and mouse. The plots of each short usually center on Tom's numerous attempts to capture Jerry and the mayhem and destruction that ensues. Tom rarely succeeds in catching Jerry, mainly because of Jerry's cleverness, cunning abilities, and luck. Despite this, there are also several instances within the cartoons where they display genuine friendship and concern for each other's well-being. Other times, the pair set aside their rivalry in order to pursue a common goal, such as when a baby escaped the watch of a negligent teen babysitter, causing Tom and Jerry to pursue the baby and keep it away from danger.

Music plays a very important part in the shorts, emphasizing the action, filling in for traditional sound effects, and lending emotion to the scenes. Musical director Scott Bradley created complex scores that combined elements of jazz, classical, and pop music; Bradley often reprised contemporary pop songs, as well as songs from MGM films, including The Wizard of Oz and Meet Me In St. Louis. Generally, there is little dialogue as Tom and Jerry almost never speak; however, minor characters are not similarly limited, and the two lead characters are able to speak English on rare occasions and are thus not mute. For example, the character Mammy Two Shoes has lines in nearly every cartoon in which she appears. Most of the vocal effects used for Tom and Jerry are their high-pitched laughs and gasping screams.

Tom (called "Jasper" in his debut appearance) is a blue and white domestic shorthair cat. He usually lives a pampered life, although the characters usually live in several lifestyles, while Jerry is a small brown house mouse who always lives in close proximity to him. "Tom" is a generic name for a male cat (The Warner Bros. cartoon character Sylvester was originally named Thomas).[citation needed] Jerry possesses surprising strength for his size, lifting items such as anvils with relative ease and withstanding considerable impacts with them. Despite the typical cat-eats-mouse scenario, it is surprisingly quite rare for Tom to actually try and consume Jerry. Most of his attempts are just to torment or humiliate Jerry. Despite being very energetic and determined, Tom is no match for Jerry's brains and wits. By the final "fade-out" of each cartoon, Jerry usually emerges triumphant, while Tom is shown as the loser. However, other results may be reached; on rare occasions, Tom triumphs, usually when Jerry becomes the aggressor or when he crosses some sort of line (the best example of which occurs in The Million Dollar Cat where, after finding out that Tom's newly acquired wealth will be taken away if he harms any animal, including a mouse, he torments Tom until Tom finally loses his temper and attacks him). Sometimes, usually ironically, they both lose, usually when Jerry's last trap potentially backfires on him after it affects Tom (An example is in Chuck Jones' Filet Meow short where Jerry orders a shark to scare Tom away from eating a goldfish. Afterwards, the shark scares Jerry away as well) or when Jerry overlooks something at the end of the course. Sometimes, they both end up being friends (only for something to happen so that Tom will chase Jerry again). Both characters display sadistic tendencies, in that they are equally likely to take pleasure in tormenting each other. However, depending on the cartoon, whenever one character appears to be in mortal danger (in a dangerous situation or by a third party), the other will develop a conscience and save him. Sometimes, they bond over a mutual sentiment towards an unpleasant experience and their attacking each other is more play than serious attacks. Multiple shorts show the two getting along with minimal difficulty, and they are more than capable of working together when the situation calls for it, usually against a third party who manages to torture and humiliate them both. Sometimes this partnership is forgotten quickly when an unexpected event happens or when one character feels that the other is no longer necessary. (Example is when in Posse Cat, when Jerry decides to pretend to get chased by Tom in exchange for half his food. Tom agrees to this, but then he goes back on his word later.) Other times however, Tom does keep his promise to Jerry and the partnerships are not quickly dissolved after the problem is solved.

Tom changes his love interest many times. The first love interest is Toots who appears in Puss n' Toots, and calls him "Tommy" in The Mouse Comes to Dinner. He is also interested in a cat called Toots in The Zoot Cat although she has a different appearance to the original Toots. The most frequent love interest of Tom's is Toodles Galore, who never has any dialogue in the cartoons.

Despite five shorts ending with a depiction of Tom's apparent death, his demise is never permanent; he even reads about his own death in a flashback in Jerry's Diary. He appears to die in explosions in Mouse Trouble (after which he is seen in heaven), Yankee Doodle Mouse and in Safety Second, while in The Two Mouseketeers he is guillotined offscreen.