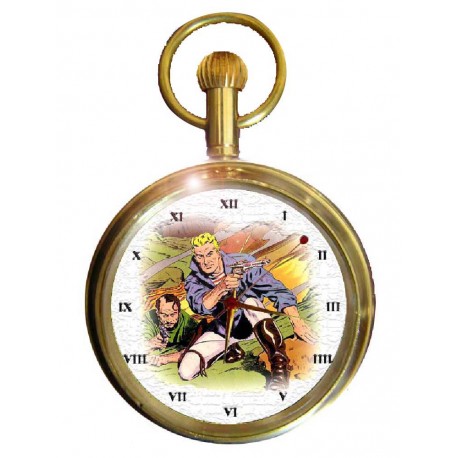 Flash Gordon is the hero of a science fiction adventure comic strip originally drawn by Alex Raymond. First published January 7, 1934, the strip was inspired by and created to compete with the already established Buck Rogers adventure strip. Also inspired by these series were comics such as Dash Dixon (1935 to 1939) by H.T. Elmo and Larry Antoinette and Don Dixon and the Hidden Empire (1935 to 1941) by Carl Pfeufer and Bob Moore.

In Australia, the character and strip were retitled Speed Gordon to avoid a negative connotation of the word "Flash".[1] At the time, the predominant meaning of "flash" was "showy", connoting dishonesty.[2] In France, his adventures were published in Le Journal de Mickey, under the name "Guy l'Éclair". Dale Arden was named Camille in the French translation. In Mexico and some countries in Latin America, the strip is called Roldán el Temerario.

The Flash Gordon comic strip has been translated into a wide variety of media, including motion pictures, television and animated series. The latest version, a Flash Gordon TV series, appeared on the US Sci Fi Channel in 2007–2008 and then on the United Kingdom Sci Fi Channel. A print comic book series by Brendan Deneen and Paul Green and published by Ardden Entertainment debuted in 2008, with the first arc entitled "The Mercy Wars". These were followed by further storylines.

The comic strip follows the adventures of Flash Gordon, a handsome polo player and Yale graduate, and his companions Dale Arden and Dr. Hans Zarkov. The story begins with Earth bombarded by fiery meteors. Dr. Zarkov invents a rocket ship to locate their place of origin in outer space. Half mad, he kidnaps Flash and Dale, whose plane has crashed in the area, and the three travel to the planet Mongo, where they discover the meteors are weapons devised by Ming the Merciless, evil ruler of Mongo.

For many years, the three companions have adventures on Mongo, traveling to the forest kingdom of Arboria, ruled by Prince Barin; the ice kingdom of Frigia, ruled by Queen Fria; the jungle kingdom of Tropica, ruled by Queen Desira; the undersea kingdom of the Shark Men, ruled by King Kala; and the flying city of the Hawkmen, ruled by Prince Vultan. They are joined in several early adventures by Prince Thun of the Lion Men. Eventually, Ming is overthrown, and Mongo is ruled by a council of leaders led by Barin. Flash and friends return to Earth and have some adventures before returning to Mongo and crashing in the kingdom of Tropica, before reuniting with Barin and others. Flash and his friends would travel to other worlds and frequently return to Mongo, where Prince Barin, married to Ming's daughter Princess Aura, has established a peaceful rule (except for frequent revolts led by Ming or by one of his many descendants). The long story of the Skorpii War takes Flash to other star systems, using starships that are faster than light.