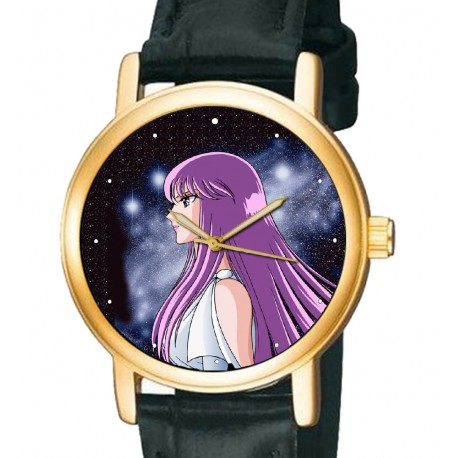 The story focuses on an orphan named Seiya who was forced to go to the Sanctuary in Greece to obtain the Pegasus Bronze Cloth, a protective armor worn by the Greek goddess Athena's 88 warriors known as Saints. Upon awakening the power of the Saints which is an inner spiritual essence, originated in the Big Bang, Seiya quickly becomes the Pegasus Saint and returns to Japan to find his older sister. Because his sister disappeared the same day Seiya went to the Sanctuary, Saori Kido, the granddaughter of the person who sent all the orphans to train, makes a deal with him to go to fight in a tournament called the Galaxian Wars, where the orphans who survived and became Bronze Saints must fight to win the most powerful Cloth: The Sagittarius Gold Cloth. If Seiya goes to compete there and wins, Saori would start a search to find Seiya's sister.

The tournament is interrupted by the revengeful Phoenix Bronze Saint, Ikki, who wishes to eliminate track from the people who forced him undergo his training. He steals parts from the Sagittarius Cloth and eventually fights against the remaining Bronze Saints, Seiya, Shun, Shiryū, and Hyōga, to complete it. Upon Ikki's defeat the Bronze Saints are attacked by the Silver Saints sent by the Sanctuary's Pope to eliminate them. When they remain victorious, the Bronze Saints learn that Saori is Athena's reincarnation and that the Pope once tried to kill her as a baby. The Sagittarius Gold Saint Aiolos saved Saori but was killed shortly afterwards and gave Saori to her adopted grandfather. Deciding to join forces with Saori, the Bronze Saints go to the Sanctuary to defeat the Pope, but upon their arrival, Saori is severely wounded by an arrow from a Silver Saint. Believing the Pope may be able to heal her, the Saints go to find him, but are encountered by several Gold Saints in the way. Following several battles, Seiya gets to the Pope's temple and learns that he is the Gold Saint Gemini Saga who killed the real Pope to obtain more power. With help from his friends' Cosmos, Seiya is able to knock out Saga and use the shield from Athena's statue to heal Saori. Shortly afterwards, Saga commits suicide as a selfpunishment.

In the manga's second story arc, the Greek god Poseidon reincarnates within the body of Julian Solo who follows his will of flooding the Earth. Saori goes to his Temple where Julian offers her to reduce the flooding by absorbing the water inside the a Pillar. Seiya, Hyōga, Shun and Shiryū go to Poseidon's underwater Temple and are confronted by his underlings, the Marines. As Seiya, Hyōga, and Shiryū make their way to Julian, Ikki learns that the mastermind behind this war is Saga's twin, Gemini Kanon, who is manipulating Julian. During the final battle, Poseidon's spirit awakes within Julian and manages to defeat his opponents. Saved by the Saints from the Pillar, Saori seals Poseidon's soul within her amphora.

The third and last arc from the manga follows how Hades, the Underworld god and Athena's strongest enemy, is freed from his seal and revives the deceased Gold Saints alongside the Pope Aries Shion to the Sanctuary to kill Athena. The remaining Gold Saints serving Athena are able subdue the enemies, but Saori then commits suicide. This act is instead meant to directly send her to the Underworld to face Hades, and the Saints follow her. Shion reveals that the revived Gold Saints' true intentions were of giving Saori her own Cloth, and gives it to Seiya's group before dying once again. In the Underworld, as Saints fight Hades' 108 Specters, Shun is possessed by Hades. Saori reaches Hades and expels his soul from Shun's body. Hades then takes Saori to the Elysium, and the five Bronze Saints follow them. In the final fight against Hades and his two followers, Hypnos and Thanatos, the Saints gain the strongest God Cloths and use them to aid Saori in killing Hades. However, Seiya also sacrifices himself by receiving one of Hades' attacks and the Saints return to Earth with his body.