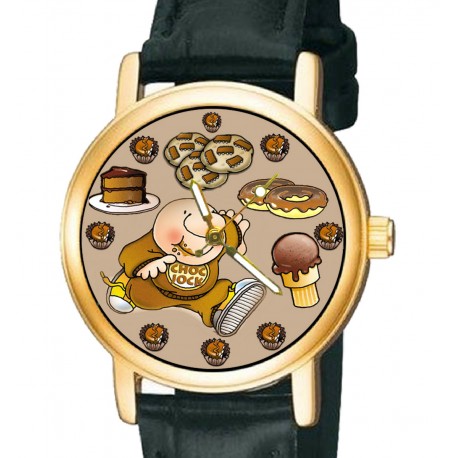 Ziggy is a small, bald, trouserless, barefoot, almost featureless character (save for his large nose) who seems to have no friends, hobbies, or romantic partner, just a menagerie of pets: Fuzz, a small white dog; Sid, a cat afraid of mice; Josh, a discouraging parrot; Goldie, a fish; and Wack, a duck. The appeal of the cast is juxtaposed with the endless stream of misfortunes which befall Ziggy. The character is frequently depicted in surreal or arbitrary situations, though many jokes mine typical comic strip pop culture territory, such as computers and the perils of modern life. Other pop cultural references can be found in the archives.

Ziggy first appeared in the 1968 book collection When You're Not Around, published by American Greetings. The newspaper strip began in June 1971. In 1987 the strip was taken over by Tom Wilson II. The animated 1982 Christmas television special Ziggy's Gift, which contained the Harry Nilsson song "Give, Love, Joy", won an Emmy Award.

There have been annual calendars produced throughout the years, as well as various books, dolls, collectables, holiday-themed toys and promotional items.

The episode "The Cartoon" of the sitcom Seinfeld centers on the character Elaine Benes publishing a cartoon that she unwittingly plagiarized from Ziggy. When Elaine's plagiarized cartoon was published in The New Yorker, the actual Ziggy retorted at the complaint desk again, saying "The New Yorker is stealing my ideas."

In one episode of the sitcom Cheers, the character Woody Boyd breaks into a fit of hysterical laughter after reading a Ziggy comic strip. Bar manager Rebecca Howe then asks who let him read it, as it is apparently his typical reaction to the strip.

In the episode "It Takes a Village Idiot, and I Married One" of the cartoon Family Guy, it is revealed that Brian has a tattoo of Ziggy.

In the "Brush with Greatness" episode of The Simpsons, Waylon Smithers is shown reading aloud a typical Ziggy comic panel to Mr. Burns. In "The Last Temptation of Homer", Homer wonders if Mindy Simmons agrees that the comic strip's protagonist has become "too preachy".

Ziggy's lack of pants stoked the fire of Rat from the comic strip, Pearls Before Swine. In 2009, from December 12th through 16th, Rat held protests demanding Ziggy put on pants. On December 17 the issue was addressed in Ziggy's strip and on the 18th, Ziggy's pants were found at a dry cleaners and he has been seen wearing them intermittently since. This was a planned joke between Tom Wilson and Pearls artist Stephan Pastis, but due to a mixup the planned strips did not run in the order they were supposed to.

On HBO's television program Mr. Show, the longevity of Ziggy was explained by its creator's on-going battle with the fictional disease Imminent Death Syndrome.