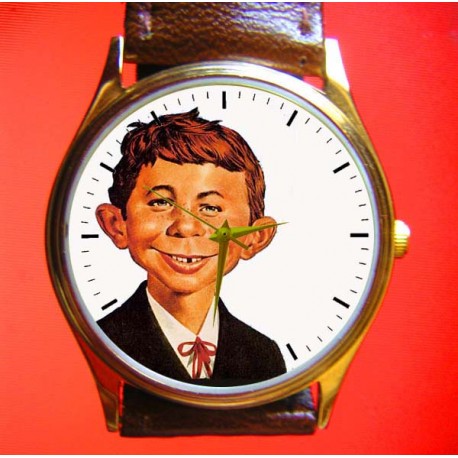 Since his debut in Mad, Neuman's likeness, distinguished by jug ears, a missing front tooth, and one eye lower than the other has graced the cover of all but a handful of the magazine's 500 issues. His face is rarely seen in profile; he has virtually always been shown in full frontal view, directly from behind, or in silhouette. Harvey Kurtzman first spotted the image on a postcard pinned to the office bulletin board of Ballantine Books editor Bernard Shir-Cliff. "It was a face that didn't have a care in the world, except mischief," recalled Kurtzman. Shir-Cliff was later a contributor to various magazines created by Kurtzman. In November 1954, Neuman made his Mad debut on the front cover of Ballantine's The Mad Reader, a paperback collection of reprints from the first two years of Mad. The character's first appearance in the comic book was on the cover of Mad 21 (March 1955), as a tiny image as part of a mock ad. A rubber mask bearing his likeness with "idiot" written underneath was offered for $1.29.

Neuman's third appearance was in the illustrated border of the first magazine version of Mad #24 (July 1955) with his now-familiar signature phrase "What, me worry?" written underneath. Initially, the phrase was rendered "What? Me worry?" This border would be used for five more issues, through Mad #30 (December 1956).

The character was also briefly known as Mel Haney. In Mad #25, the face and name were shown together, on separate pages, as both Alfred E. Neuman and Mel Haney. The crowded cover shot on Mad #27 marked Neuman's first color appearance.

In late 1956, Neuman's identity became fixed, when he appeared on the cover of Mad #30 as a supposed write-in candidate for the Presidency. His features, which had first been rendered in black-and-white by Will Elder, were fine-tuned and recreated in color by Norman Mingo. It was this image which became the character's defining portrait. In November 2008, Mingo's original cover art featuring the first "official" portrait of Neuman sold at auction for $203,150.

Beginning with issue 30, and continuing to the present day, Neuman has appeared on the cover of every issue of Mad and its spinoffs, in one form or another, with a small handful of exceptions. Two such departures were Mad #233 (September 1982) which replaced Neuman's image with that of Pac-Man and "Mad" #195 (December 1977) which instead included the message "Pssst! Keep This Issue Out of the Hands of Your Parents! (Make 'Em Buy Their Own Copy!).

Mingo painted seven more Neuman covers through 1957 and later became the magazine's signature cover artist throughout the 1960s and 1970s, although Frank Kelly Freas rendered Neuman for Mad from 1958 to 1962. A female version of Alfred, named Moxie Cowznofski and occasionally described in editorial text as Alfred's "girlfriend," appeared briefly during the late 1950s. Alfred and Moxie were sometimes depicted side-by-side, defeating any speculation that Moxie was possibly Alfred in female guise. Her name was inspired by Moxie, a soft drink manufactured in Portland, Maine, which was sold nationwide in the 1950s and whose logo appeared in many early issues of Mad.

In late 1959, Mad released a 45 rpm single entitled "What - Me Worry?" on ABC Paramount 12013 that was credited to Neuman, and featured an uncredited voice actor singing the song as Neuman. (The B-side of the single, "Potrzebie", is an instrumental.)

Since his initial unsuccessful run in 1956, he has periodically been re-offered as a candidate for President with the slogan, "You could do worse... and always have!"

Despite Neuman's ubiquity as a grinning cover boy as the magazine's circulation quadrupled, the single highest-selling issue of Mad depicted only his feet. The cover image of issue #161, spoofing the 1973 film The Poseidon Adventure, showed Neuman floating upside-down inside a life preserver. The original art for this cover was purchased at auction in 1992 for $2,200 by Annie Gaines, the widow of MAD founder and publisher William Gaines, and subsequently given on permanent loan to MAD writer Dick DeBartolo.

To date, only a dozen Mad covers have not depicted Alfred E. Neuman since his appearance on issue #30, the most notorious being the controversial cover to #166. It declared Mad to be "The Number One Ecch Magazine," illustrating the claim with a human hand giving the profane "middle finger" gesture. Some newsstands that normally carried Mad chose not to display or sell this issue.

Along with his face, Mad also includes a short humorous quotation credited to Neuman with every issue's table of contents. (Example: "It takes one to know one... and vice versa!") Some of these quotations were collected in the 1997 book Mad: The Half-Wit and Wisdom of Alfred E. Neuman, which was illustrated by Sergio Aragonés.

Neuman is now used exclusively as a mascot and iconic symbol of the magazine, but before this status was codified, he was referenced in several early articles. In one, Neuman answered a letter from a suicidal reader by giving "expert advice" on the best technique for tying a hangman's knot. Other articles featured the school newspaper of "Neuman High School," and a bulletin from "Alfred E. Neuman University." An article entitled "Alfred E. Neuman's Family Tree" depicted historical versions of Neuman from various eras. Since then, Neuman has appeared only occasionally inside the magazine's articles. A recurring article titled "Poor Alfred's Almanac" showed his face atop the page, but otherwise the character had no role in the text. In a 1968 article, Alfred's face was assembled, feature by feature, from parts of photographs of well-known politicos, including then-President Lyndon B. Johnson (left ear), Richard Nixon (nose), Oregon Governor Mark Hatfield (eyes), and Ronald Reagan (hair). The gap in his teeth (which was otherwise the grin of Dwight D. Eisenhower) came from "The 'Credibility Gap' Created by Practically All Politicians."

Neuman's famous motto is the intellectually uncurious "What, me worry?" This was changed for one issue to "Yes, me worry!" after the Three Mile Island accident in 1979. On the cover of current printings of the paperback The Ides of Mad, as rendered by long-time cover artist Norman Mingo, Alfred is portrayed as a Roman bust with his catch phrase engraved on the base, translated into Latin-- Quid, Me Anxius Sum?

Neuman also appeared as himself in a political cartoon, after Newsweek had been criticized for using computer graphics to retouch the teeth of Bobbi McCaughey. The cartoon was rendered in the form of a split-screen comparison, in which Alfred E. Neuman was featured on the cover ofMad with his usual gap-toothed grin, then also featured on the cover of Newsweek, but with a perfect smile.

Despite the primacy of Neuman's incomplete smile, his other facial features have occasionally attracted notice. Artist Andy Warhol said that seeing Neuman taught him to love people with big ears