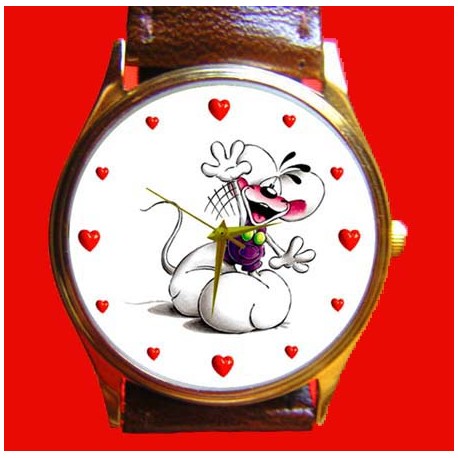 Diddl is a cartoon character created by German artist Thomas Goletz in 1990. Diddl is a white 'Jumping Mouse', with big ears and large pink-soled feet allowing him to jump large distances. Diddl and his friends are featured on various sorts of products such as stationery and collectibles, and also in a range of plush dolls and toys manufactured by Depesche.

In Austria, Diddl was a highly popular cartoon character, together with its host of characters.

The Diddl range of characters reside in the fictional 'Cheesecakeland', where the soil, rocks and walls are made of cheese but otherwise seems very similar to Earth with deserts, rivers, and even a moon.

When Diddl was first created in 1990, he was originally drawn to be a kangaroo until Thomas Goletz decided to change him into a mouse[. A monthly Dutch publication called "Diddl's Kaasblad" is full of Diddl's adventures, cooking ideas, and more. Children collect Diddl papers all around the world and play games with Diddl game cards. Diddl was extremely popular in the years 2003-2005[c