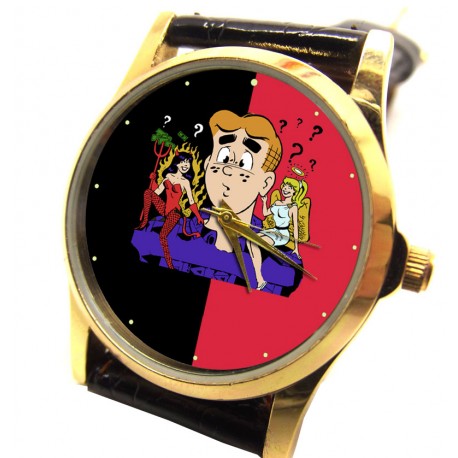 Archibald "Archie" Andrews (Archi Gómez in the Spanish version of the comics) debuted in Pep Comics 22 (December, 1941). Decades later, Archie is still a lovable, though accident-prone, redheaded 17-year-old. Archie is the only child of Mary and Fred Andrews. His father works as a mid-level business executive. His earlier life is revealed in the "Little Archie" stories when he had a dog named Spotty. He lives in Riverdale, where he attends Riverdale High School.

Archie is a typical small-town teenager. Generous, well-mannered, but clumsy, he is genuinely liked by many of his friends. Archie goes crazy when he sees an attractive girl, but his two main crushes are Veronica Lodge and Betty Cooper, forming the love triangle driving the comic's plot-lines. He has the best intentions, but often comes into conflict with Veronica's father Hiram Lodge and Riverdale High's principal, Waldo Weatherbee. As the lead singer of The Archies, Archie performs with Betty and Veronica, as well as his rival Reggie, and best bud Jughead.

Mary and Fred Andrews are of Scottish descent. Archie's paternal grandfather Andy Andrews, immigrated to the United States from Scotland and befriended Moose Mason's Russian ancestor, who had emigrated at the same time. Archie has been depicted wearing the traditional kilt of his ancestors and playing bagpipes (but not very well).

The love triangle between Betty, Archie and Veronica became the hallmark of the Archie stories since the character was created more than 60 years ago. In Archie's debut, when he was nicknamed Chick, he was trying to impress the girl next door, Betty Cooper. Initially, Betty only considered him as an annoying neighbor. When Veronica Lodge came to Riverdale, he switched his attention to her, leading Betty to jealousy. She then began competing with Veronica for his affection.

It is quite apparent that Archie has feelings for both girls. Archie and Betty date regularly, and he can count on her to lift his ego by showering him with affection. Often, though, he thinks of her as only a close friend, someone that he can confide in, and is more comfortable with her. Betty clearly loves Archie, but he frequently takes her for granted. However, with Betty sporadically dating Jason Blossom and Adam Chisholm currently, he shows a tinge of jealousy.

Archie considers Veronica to be his girlfriend, but as beautiful, stylish, and wealthy as she is, Veronica can easily manipulate him, and although he sometimes realizes it, he cannot do anything about it. He keeps running back to her, but she is rarely devoted to him. Archie is always fighting for her affection with his rival, Reggie Mantle, and occasionally other boys. A third love interest is the wealthy red-haired girl named Cheryl Blossom. At first, she was deemed too sexual and a bit promiscuous and she was taken out of the series, but due to her popularity, she was brought back again in Love Showdown, a four-part mini-series in which Archie attempts to make the final decision between Betty and Veronica. Despite the efforts of both, he surprisingly chose Cheryl Blossom. However, he returned to being torn between Betty and Veronica, with Cheryl remaining only an occasional third option. At the same time, Archie also dates many other girls, including Ginger Lopez, occasionally.

On May 15, 2009, Archie Comics announced by Archie would finally pick one of the girls to marry. According to the Archie Blog, the miniseries would run in Archie issues 600-606 (August 2009-February 2010).[1] However, Archie Comics publicly revealed this to be a dream sequence [2] to show two possible futures: one where Archie marries Veronica (issues 600-602), and the other Betty (603-605). In both, he has twins: a boy also named Archie who looks like him, and a girl named after and resembling whichever girl he married. Issue 606 was an epilogue to Archie Marries Veronica/Archie Marries Betty that returns to the comics' old format.

In Archie # 608 (May 2010), Archie began a relationship with Valerie Smith, making her Archie's first black girlfriend. The Archies and Josie and the Pussycats were touring together. While rehearsing, Archie and Valerie secretly fell in love as they co-wrote the song "More Than Words" that described their feelings. Issue #609 revealed that this relationship had seeped into common knowledge by the end of the tour. In the comic Archie Marries Valerie, Valerie is expecting a baby with Archie, whom they name Star. Archie and Valerie were forced apart when the Pussycats were touring Europe without the Archies, but hoped to keep their relationship going.

Jughead Jones has been Archie's best friend ever since childhood. When Jughead first came to Riverdale, he was in a bad mood and tended to dismiss Archie. However, Archie, of good heart, tried to cheer up Jughead and the two have been inseparable ever since. Jughead wears a trademark "clubhouse beanie" (a Depression-era style of makeshift hatwear, crafted from an inverted fedora with a scallop-cut brim, and decorated with assorted pinbacks) and an inscrutable, closed-eyelid expression. Often Jughead has to help Archie out from a tricky situation. Jughead usually knows when Archie's ideas will not work, but is powerless to avoid getting involved.

Reggie Mantle is Archie's constant romantic and athletic rival. Each often makes attempts to separate the other from Veronica, occasionally exhibiting physical violence, and both have won their fair share of scrapes with each other. Reggie takes every opportunity to play practical jokes on Archie and make cynical wisecracks. However, Reggie is often shown as a companion to and of Archie despite his arrogance and competitive nature, and they are often seen together practicing athletics or pursuing dates.

Archie's other friends include Dilton Doiley, the local genius who gets Archie into and out of trouble through his experiments and inventions; Moose Mason, the dim-witted but likable star athlete of Riverdale High who is often Archie's teammate; Chuck Clayton, another of Archie's teammates who was originally shy and reclusive but came out of his shell when Archie befriended him; Moose and Chuck's girlfriends Midge Klump and Nancy Woods, two of the very few attractive girls Archie does not fall for; and Ethel Muggs, a girl with a major crush on Jughead, who often wins his heart with the use of fresh-baked cookies. In Midge's case, however, Reggie is attracted to her and schemes to date her only to be beat up by Moose.

Outside of dating, Archie largely enjoys sports. He plays baseball, basketball, and football for the Riverdale High teams. Though often not as good an athlete as Moose Mason, Chuck Clayton or Reggie Mantle, he proves a valuable member of the school team. Coaches Kleats and Claytonvalue him for both his athletic abilities and his team spirit. However, Archie's athletic abilities vary from story to story, due to his frequent clumsiness. He also has a tendency to pay more attention to cheerleaders than to his playing. For this reason, Coach Kleats often tries to avoid resorting to use Archie in a game. Issue 238 of Life With Archie from 1983, where his jalopy is destroyed

Automobiles are one of Archie's hobbies, and he is passionate about his car. For decades, he was shown driving a 1916 Ford Model T jalopy called "Betsy". In Archie double digest #192, it is said to be a Model A. In a story where Archie tried to have his jalopy insured, he described it as being a "Ford, Chevy, Plymouth, Pierce-Arrow, Packard, DeSoto, Hudson ..." explaining that his jalopy was "a collection of replacement parts from several junkyards", some of which dated back to 1926.

Archie's jalopy was destroyed permanently in issue #238 of Life With Archie, which was published in 1983. In the newer comics, he drives a mid-1960s Ford Mustang, which is more contemporary in appearance, but still unreliable and prone to breakdowns. Archie Digest 239, published in October 2007, included a new story where Mr. Lodge owned an antique car that had a strong resemblance to Archie's jalopy. The story featured Archie's grandfather who, as a teenager, looked and dressed like Archie from the 1940s. It turned out that he owned the same jalopy that Mr. Lodge now owned