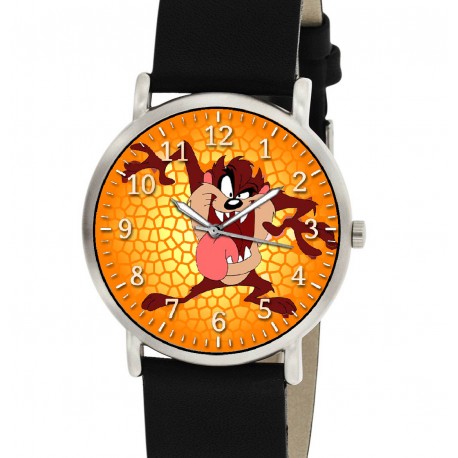 Robert McKimson based the character on the real-life Tasmanian Devil, or more specifically its carnivorous nature and voracious appetite. Owen and Pemberton suggest that the character of the Tasmanian Devil was inspired by Errol Flynn. The most noticeable resemblance between the Australian marsupial and McKimson's creation is their ravenous appetites and crazed behavior. Although the bipedal Tasmanian Devil's appearance does not resemble its marsupial inspiration, it contains multilayered references to other "devils": he has horn-shaped fur on his head (similar to the Devil's appearance) and whirls about like a dust devil (similar in appearance to a tornado) which sounds like several motors whirring in unison. Taz is constantly voracious. His efforts to find more food (animate or inanimate) are always a central plot device of his cartoons.

In fact, this appetite serves as the impetus for McKimson's Devil May Hare (first released on June 19, 1954). In the short, Taz stalks Bugs Bunny, but due to his dimwittedness and inability to frame complete sentences, he serves as little more than a nuisance. Bugs eventually gets rid of him in the most logical way possible: matching him up with an equally insatiable female Tasmanian Devil. The character's speech, a deep, gravelly voice peppered with growls, screeches, andraspberries, is provided by Mel Blanc. Only occasionally would Taz actually speak, usually to utter some incongruous punchline, (e.g. "What for you bury me in the cold, cold ground?") and yet the character is capable of writing and reading. Arunning gag is that when Bugs Bunny hears of the approach of "Taz" and looks him up in an encyclopedia and starts reading off a list of animals that "Taz" eats; Bugs finds "rabbits" not listed until "Taz" enters and either points out that "rabbits"are listed or writes rabbits on the list.

After the short entered theaters, producer Eddie Selzer, head of the Warner Bros. animation studio, ordered McKimson to shelve the character, feeling it was too violent for children and parents disliked this.[2] After a time with no new Taz shorts, studio head Jack Warner asked what had happened to the character. Warner saved Taz's career when he told Selzer that he had received "boxes and boxes" of letters from people who liked the character and wanted to see more of him.

McKimson would go on to direct four more Tasmanian Devil cartoons, beginning with Bedeviled Rabbit (released on April 13, 1957). McKimson would also pair the Devil with Daffy Duck in Ducking the Devil (August 17, 1957) before pitting him once again against Bugs in Bill of Hare (June 9, 1962) and Dr. Devil and Mr. Hare (March 28, 1964). His last two appearances done by the classic Warner Brothers directors, writers, and voice actors were in Bugs Bunny's Looney Christmas Talesappearing in The Fright Before Christmas segment and at the very end eating the sleigh full of presents. Then he appeared in the 1983 movie Daffy Duck's Fantastic Island as Yosemite Sam's first mate.

The Tasmanian Devil appeared in "The Looney Tunes Show" episode "Devil Dog" voiced by Jim Cummings. In the show, he is portrayed walking on four legs like a real Tasmanian Devil and his eyes are bloodshot red (later turned yellow when Bugs uses a taming trick that Speedy Gonzalestaught him). Initially, Bugs believed Taz to be a dog and kept him as a house pet, to his roommate, Daffy Duck's, discomfort. Eventually Bugs learned the truth and tried to return him to his home in Tasmania, only to find out that Taz would rather live with him, naming him "Poochie". Taz subsequently appears in the following episodes, "The Foghorn Leghorn Story", "Newspaper Thief", and "Bugs and Daffy Get A Job".