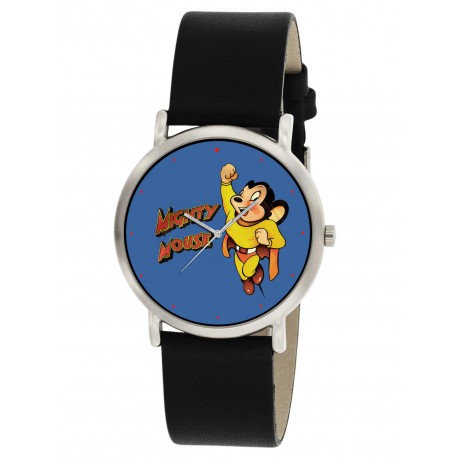 Mighty Mouse is an American animated anthropomorphic superhero mouse character created by the Terrytoons studio for 20th Century Fox. The character made its first appearance in 1942 (originally named Super Mouse), and subsequently appeared in 80 theatrical films produced between 1942 and 1961. These films later appeared on American television from 1955 through 1967 on the CBS television network on Saturday mornings. The character went through two later revivals, once by Filmation Studios in 1979, and again in 1987 at the hands of animation director Ralph Bakshi, who had worked at the Terrytoons studio during his early career.

Mighty Mouse has also appeared in comics, in a television commercial about cheese, and has graced the front of a major musician's guitar. The name Mighty Mouse caused an accusation of trademark infringement to be leveled at Apple, and the character was even accused of promoting cocaine use.

The character was originally conceived by story man Izzy Klein as a super-powered housefly named Super Fly.[1] Created as a parody of Superman, he first appeared in 1942 in a theatrical animated short titled The Mouse of Tomorrow. The original name of the character was Super Mouse, but after 7 films produced during 1942 to 1943, it was changed to Mighty Mouse in the 1944 cartoon The Wreck of the Hesperus when Paul Terry learned that another character named Super Mouse was being published in comic books. Super Mouse appeared briefly in the Marvel Comicsinterpretation of the character and was nicknamed Terry the First, as he was the first version of the character.

As with other imitations of Superman, Mighty Mouse's super powers include flight, super strength, and invulnerability. In various films he has demonstrated the use of X-ray vision, and has used a form of telekinesis that allowed him to command inanimate objects and turn back time (The Johnstown Flood and Krakatoa). Other cartoons show him leaving a red contrail during flight which he can manipulate at will like a band of solid flexible matter.

Mighty Mouse has had two recurring female leads. In the cartoon shorts it was a mouse named Pearl Pureheart, while in the comics published in the 1950s and 1960s the character was named Mitzi. His recurring arch-enemy is an evil villain cat named Oil Can Harry (who originated as a human in earlier Terrytoons as the enemy of Fanny Zilch).

The early formula of each story consists of a crisis which needs extraordinary help to resolve. At the decisive moment, Mighty Mouse comes to the rescue. Beginning with A Fight to the Finish (1947), the story line usually begins with Mighty Mouse and Pearl Pureheart already in a desperate situation, as if they were in the next chapter of the serial.

Mighty Mouse cartoons spoofed the cliffhanger serials of silent films, as well as the classic operettas of stage that were still popular at the time.

The characters often sing mock opera songs during these cartoons (e.g., Pearl: "Oil Can Harry, you're a villain!"; Oil Can Harry: "I know it, but it's a lot of fun..."). Mighty Mouse sings tenor, Pearl is a soprano, and Oil Can Harry a bass-baritone. Mighty Mouse is also famous for singing, "Here I come to save the day!" when flying into action.

In several of the Mighty Mouse cartoons, whenever he achieved the most impossible physical tasks, the narrator exclaimed, first softly: "what a mouse!!!". then loudly: "WHAT A MOUSE!!!".

The early Mighty Mouse cartoons often portray Mighty Mouse as a ruthless fighter. One of his most frequent tactics is to fly under the chin of an enemy and let loose a volley of blows, subduing the opponent through sheer physical punishment.

While his typical opponents are non-decrepit cats, Mighty Mouse occasionally battles specific villains, though most of them appear in only one or two films. Several of the earliest "Super Mouse" films (having been made during World War II) feature the cats as thinly veiled caricatures of theNazis, hunting down mice and marching them into concentration camp-like traps to what would otherwise be their doom. The Bat-cats, alien cats with bat wings and wheels for feet, appeared in two cartoons; in two other shorts between 1949 and 1950 he faces a huge, dim-witted, but super-strong cat named Julius "Pinhead" Schlabotka (voiced by Dayton Allen) whose strength rivals Mighty Mouse's own. In rare moments he confronts non-feline adversaries, such as human bad guy Bad Bill Bunion and his horse or the robotic Automatic Mouse Catcher, a brontosaurus shaped mechanical monster. In another cartoon, titled The Green Line (1944), the cats live on one side of the main street of a town and the mice on the other, with a green line down the middle of the street serving as the dividing line. They agree to keep the peace as long as no one crosses it. An evil entity, a Satan cat, starts the cats and mice fighting. At the end, Mighty Mouse is cheered by mice and cats alike.

At least one episode of Mighty Mouse, Wolf! Wolf! has fallen into Public Domain and is available at the Internet Archive.[3]

The 1945 film Gypsy Life was nominated for an Oscar in the category of Short Subject (Cartoon).