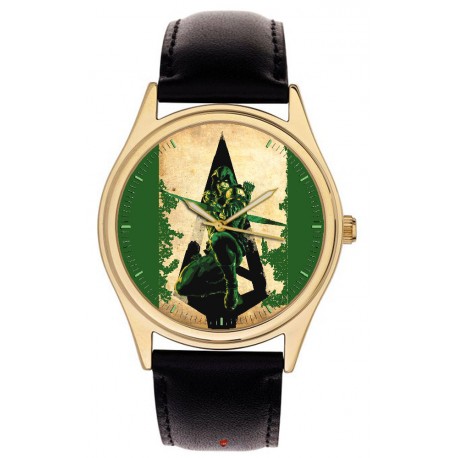 Green Arrow is a fictional superhero who appears in comic books published by DC Comics. Created by Mort Weisinger and designed by George Papp, he first appeared in More Fun Comics #73 in November 1941. His real name is Oliver Jonas Queen, a wealthy businessman and owner of Queen Industries who is also a well-known celebrity in Star City. He uses this position to hide the fact that he is the Arrow.[1] Sometimes shown dressed like the character Robin Hood, Green Arrow is an archer who uses his skills to fight crime in his home cities of Star City and Seattle, as well as alongside his fellow superheroes as a member of the Justice League. Though much less frequently used in modern stories, he also deploys a range of trick arrows (in contemporary times, they are referred as "specialty arrows"[2]) with various special functions, such as glue, explosive-tipped, grappling hook, flash grenade, tear gas and even kryptonite arrows for use in a range of special situations. At the time of his debut, Green Arrow functioned in many ways as an archery-themed analogue of the very popular Batman character, but writers at DC subsequently developed him into a voice of left-wing politics very much distinct in character from Batman.

Green Arrow enjoyed moderate success in his early years, becoming the cover feature of More Fun, as well as having occasional appearances in other comics. Throughout his first twenty-five years, however, the character never enjoyed greater popularity. In the late 1960s, writer Denny O'Neil, inspired by the character's dramatic visual redesign by Neal Adams, chose to have him lose his fortune, giving him the then-unique role of a streetwise crusader for the working class and the disadvantaged. In 1970, he was paired with a more law and order-oriented hero, Green Lantern, in a ground-breaking, socially conscious comic book series.[3] Since then, he has been popular among comic book fans and most writers have taken an urban, gritty approach to the character. The character was killed off in the 1990s and replaced by a new character, Oliver's son Connor Hawke. Connor, however, proved a less popular character, and the original Oliver Queen character was resurrected in the 2001 "Quiver" storyline, by writer Kevin Smith. In the 2000s, the character has been featured in bigger storylines focusing on Green Arrow and Black Canary, such as the DC event The Green Arrow/Black Canary Wedding and the high-profile Justice League: Cry for Justice storyline, prior to the character's relaunch alongside most of DC's properties in 2011.

Green Arrow was not initially a well-known character outside of comic book fandom: he had appeared in a single episode of the animated series Super Friends in 1973. In the 2000s, the character appeared in a number of DC television properties, including the animated series Justice League Unlimited, Young Justice, The Batman and Batman: The Brave and the Bold, and several DC Universe Animated Original Movies. In live action, he appeared in the series Smallville, played by actor Justin Hartley, and became a core cast member. In 2012, the live action series Arrow debuted on The CW, in which the title character was portrayed by Stephen Amell, and launching several spin-off series, becoming the starting point for a shared television franchise called the Arrowverse.