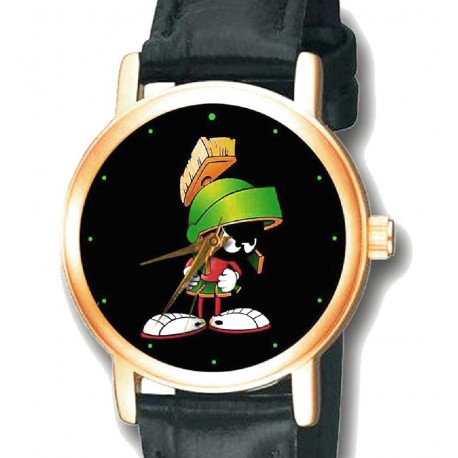 Marvin hails from the planet Mars, but is often found elsewhere. He is often accompanied by his dog "K-9", and sometimes by other creatures (one gag, first used in Hare-Way to the Stars (1957), being candy-sized "Instant Martians" that become full-size on addition of drops of water).

Marvin wears a Roman soldier's uniform, with old-fashioned basketball shoes. The style of these resembles the Chuck Taylor All-Stars brand name, considered to be the "generic" or "standard" basketball sneaker. His head is a black sphere with only eyes for features. The curved crest of his helmet appears, with the push-broom-like upper section, to comically resemble an ancient Greek hoplite's or a Roman Centurion's helmet. The appearance of the combination of Marvin's head and helmet allegedly led to Bugs Bunny thinking he was a "bowling ball wearing a spittoon" in one Looney Tunes animated short. Marvin speaks with a soft, nasally accent, and often speaks technobabble. The helmet and skirt that surround him are green and his suit is red (in a few of the original shorts, his suit was green). He is also known for his trademark quotes "Where's the kaboom? There was supposed to be an earth-shattering kaboom!", "Isn't that lovely?", and "This makes me very angry, very angry indeed."

On numerous occasions, Marvin has tried to destroy the Earth with his "Illudium Q-36 Explosive Space Modulator" (sometimes pronounced "Illudium Pu-36").[2] Marvin always laboriously over-pronounces the name of the device, which resembles a mere stick of dynamite, in order to avoid any possibility of confusing it with some other similar technology.[3] Marvin attempts to destroy the Earth because, he reasons, "it obstructs my view of Venus"; he has been trying to destroy the Earth for more than two millennia, suggesting that members of his species, and possibly martian creatures in general, have extremely long lifespans. The original reference to "Uranium Pu-36" changed to "Illudium PU-36" in subsequent cartoons [1]. Marvin is consistently foiled by Bugs Bunny. He has battled for space territory, Planet X, with Daffy Duck, a.k.a. Duck Dodgers in the 24½th Century.

He has appeared in three animated shows on Cartoon Network — as a 3 year old toddler in Baby Looney Tunes, as a primary villain in the Duck Dodgers television series, and most recently in The Looney Tunes Show.

Over a decade prior to any of these, he guest-starred in a Tiny Toon Adventures segment titled "Duck Dodgers Jr.", where he was accompanied by an apprentice named Marcia the Martian.

He was also in a Taz-Mania episode "The Man from M.A.R.S." and did a cameo in The Sylvester and Tweety Mysteries ("What's the Frequency, Kitty?").

Marvin also made appearances on Animaniacs, notably in the Mindy and Buttons short subject, "Cat on a Hot Steel Beam" (which also featured the cute kitten Pussyfoot) and in "Star Warners", along with his dog K-9 And most recently in a MetLife commercial.

Cartoon Network also created a 2-minute filler piece featuring Marvin-- "Mars Forever" by the Plastic Fantastic Machine. It's a disco-style video combining clips of Marvin and Bugs Bunny from their encounters in "Haredevil Hare," "Hareway to the Stars," as well as bits of "Duck Dodgers in the 24th-and-a-half Century" and "Rocket Bye Baby."

Marvin has also appeared in a number of video games. He served as the main antagonist in both the Mega Drive/Genesis game Taz in Escape From Mars and the Super Nintendo game Daffy Duck: The Marvin Missions. He also appeared in Bugs Bunny Lost in Time for PlayStation where he was the boss of Dimension X, and in the final level of Sheep, Dog, 'n' Wolf. He was a common enemy in the Quantum Beep stages of Road Runner's Death Valley Rally for Super Nintendo. He also made a brief cameo in the 2003-2007 CN Fridays intro.

Marvin was also cast as the referee in Space Jam (though he did not stay to referee the whole game due to Bupkus beating him up), and then later had a major villainous role in Looney Tunes: Back in Action where he was hired by the ACME chairman, Mr. Luther J. Chairman (Steve Martin), to finish DJ (Brendan Fraser) and the gang at Area 52. In the film's climax, he reappears to bring the Blue Monkey diamond to the ACME satellite, but is thwarted by Bugs (who he duels in a parody of Obi Wan Kenobi and Jango Fett in Star Wars Episode II: Attack of the Clones) and Daffy (who arrives as Duck Dodgers to save Bugs after he is exhausted from the battle), resulting in Marvin trapped in a bubble floating through space.

Marvin appeared in the Looney Tunes version of A Christmas Carol, Bah, Humduck! A Looney Tunes Christmas as an employee at Daffy Duck's "Lucky Duck Super Store". Marvin was homesick for his planet, Mars, and wanted to go back for Christmas (but also mentions that he's planning to destroy the Earth as well). At first, Daffy doesn't let him take Christmas off, since he expects the employees to work on Christmas Day. After being visited by the abrasive yet well-intentioned Christmas ghosts, Daffy is redeemed, and as part of a surprise Christmas celebration, gives Marvin a rocket that will go faster than the speed of light, allowing him to make it to Mars by yesterday.

In nearly all of his appearances, Marvin is shown using a small pistol that fires either bubbles of pliable plastic or energy beams. He is also apparently immortal or long-lived, since he mentions doing over two thousand years of research to create the Illudium Q-36 Space Modulator, and he is seen in Duck Dodgers in the 24½th Century, with Gossamer, a hairy red monster, as his assistant.

1. In older Looney Tunes episodes, Marvin is unemployed; later, he does secret missions for the M3 Squad.

2. In Looney Tunes Back in Action, he is an evil villain working for the Chairman.

3. In the Duck Dodgers series, he is a Martian commander/super villain for the queen.

4. In one Duck Dodgers episode, he is demoted to slave boy as punishmen for hurting Dodgers.

5. In the new Looney Tunes show, he makes pizzas and helps deliver them.

6. In Looney Tunes Christmas, he puts prices on products in a super store, until the end of the film when he is promoted to assistant manager.

7. Marvin was the referee in Space Jam.