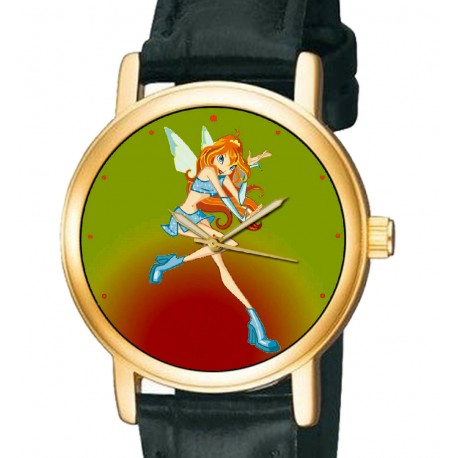 Winx Club is an Italian animated television series[1] directed, created, and produced [2] by Iginio Straffi  and his company Rainbow S.r.l.. It is part of the larger Winx Club franchise. The series is the first Italian cartoon to be sold in the U.S. According to Iginio Straffi's website, "Winx Club is an action and fantasy show combined with comedic elements. In the mystical dimension of Magix, three special schools educate modern fairies, ambitious witches and supernatural warriors, and wizards from all over the magical universe."

The story follows Bloom and her five best friends, Stella, Flora, Tecna, Musa and Layla/Aisha, and is situated mainly in the Magical Dimension and on Earth. They call themselves "The Winx Club" and go on countless magical and mystical adventures together. Throughout the story, they discover new evolved much stronger fairy transformations, unlock new secrets and even stronger magical powers, battle against the darkness and support Bloom as she tries to discover her true past, home world, and birth parents.

In the first season, everyone is endowed their regular Winx/fairy form. This basic form usually consists of a sparkling and glittering cropped top and a sparkling, glittering miniskirt or mini-shorts. However, some Winx/fairy forms consist of sparkly dress or a full piece suit, which are clear examples of Flora and Tecna's Winx/fairy forms. Also, they usually, but not always, bear some sort of accessory on their arms such as wristbands, arm warmers or gloves. They also sometimes wear a matching hair ornament such as a tiara and their hair is occasionally tied while in this form. They also don boots or, most often, heeled shoes and sprout a pair of small, membranous, fluttering wings. It should be noted that Winx fairies cannot cover long distances and they are incapable of agile flight (see picture of the characters with their pixies). It is not the most powerful form, as it only allows a fairy to use basic attacks; but in a special case like Bloom, she can unleash her dragon flame which happens to be very intense; as seen in the final battle between Bloom and Icy in the first season.

In the second season, they get their second evolutionary fairy transformation and magical power, Charmix. They earn their Charmix by accomplishing something that helps them to get in touch with their true selves. They still wear their sparkly, glittery regular Winx/fairy outfits, but now they have a pin on their chest with a small gem and a small purse or waist bag that sits on the side of their miniskirt or mini shorts. However, in Flora's case, she has a shoulder bag and not a waist-bag like the others do.

In the third season, they get their Enchantix, which is their full-fledged fairy form. In their Enchantix form, the girls have much larger fairy wings that are much more sparkly, glittery, and elegant, which enable them to fly higher and longer distances and cleave through strong windstorms, as well out-fly predators and opponents. They also have a fairy dust vial, situated around their neck, usually suspended by a choker, that contains and keeps sealed their fairy dust of tremendously powerful healing and spell-breaking properties. Bloom also uses her fairy dust vial to keep the tremendously powerful, magical essences of other worlds stored inside of it, as shown in, The Omega Mission when the Winx and the Specialist's are boarding the ship for flight back to Alfea. An Enchantix typically consists of above-the-elbow translucent gloves and barefoot sandals. They wear a very short dress or a small top with a miniskirt or mini shorts. Their hair grows longer and is elaborately arranged in loose tresses and high bunches; Tecna has a razored bob and Musa wears extremely long pigtails. A fairy earns her Enchantix by saving someone from her home world, with a great sacrifice on her part (excluding Bloom and Tecna- Bloom willed herself into her Enchantix and Tecna gave herself up for all of Magix, though that does include her home planet of Zenith). It should be noted that one does not actually have to be on one's home world when doing this. Enchantix is said to be 'the maximum or final fairy form that leads a fairy to her infinite energy' in the third season; but because the Winx didn't know about them yet, they manage to achieve Believix and Harmonix, which are even more powerful than Enchantix. Headmistress Faragonda is said to have already reached her Enchantix level.

In the fourth season, all of the Winx move on to their Believix, entering a more advanced fairy stage with larger wings and additional powers, including the ability to make people believe in fairies, hence the name. The form is earned by making a human believe in fairies. All six Winx girls become Believix fairies at the same time by convincing Roxy, the last fairy of Earth, to acknowledge the existence of fairies and subsequently embrace her own being. In their Believix form, they have three new types of wings with special powers. There is Speedix (much faster wings), Zoomix (short-distance teleportation), and Tracix (visions into the past and, possibly, future). A Believix outfit usually consists of a cropped top and a miniskirt or pants. The girls wear socks and heels and their hair is usually tied. They often wear fingerless gloves. Also, Believix powers have two new sub-transformations (Gifts of Destiny) added; Lovix(which gives them ice powers) and Sophix(which gives them the powers of plant and nature).

In the fifth season, the Winx evolve to Sirenix fairies; a power that enables a fairy to accelerate and use it's magic properly underwater. Apart from the other seasons, the Winx got their Harmonix powers from their sirenix guardians, thus, not making the girls perform a specific 'task' to gain a new power. The wings get much smaller,(compared to Enchantix or Believix wings) but makes faries accelerate faster underwater. They get much stronger and more powerful than ever(more than Believix). The Winx Club fairy outfits all look the same, only with minor changes and shades of colors. Their hair is tied with several hair bands and accessories(minus Tecna). The outfits are mostly a dress with a strap that goes on one shoulder, with a belt and a mini-skirt, and a long cape stretching from their waist. They wear heeled barefoot sandals, made of two ribbons attached around the feet and legs. when they cross the infinite ocean they got stronger wings and colored hair underwater purple steams above in currently unknown whether the curse of sirenix will effect the trix or the winx their is a curse that left daphne in her current state making this a dangerous transformation