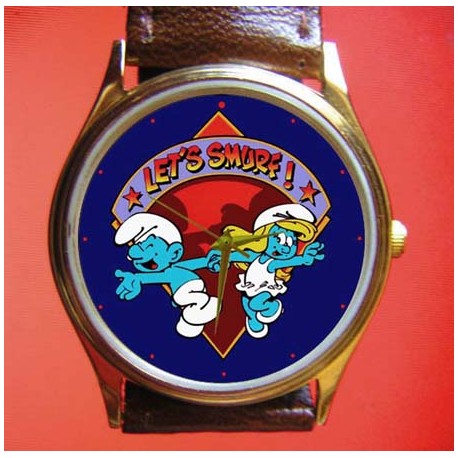 The Smurfs (French: Les Schtroumpfs) is a Belgian comic and television franchise centered on a group of small blue fictional creatures called Smurfs, created and first introduced as a series of comic characters by the Belgian comics artist Peyo (pen name of Pierre Culliford) in 1958. There are more than one hundred Smurfs, whose names are based on adjectives that emphasize their characteristics, e.g. 'Jokey Smurf', who likes to play practical jokes on his fellow smurfs, 'Clumsy Smurf', who has a habit of creating havoc unintentionally, and 'Smurfette' -- the first female Smurf to be introduced in the series.

At the time he came up with the creative idea for the Smurfs, Peyo was the creator, artist, and writer of the Franco-Belgian comics series titled Johan et Pirlouit (translated to English as Johan and Peewit), set in Europe during the Middle Ages and including elements of sword-and-sorcery. Johan serves as a brave young page to the king, and Pirlouit (pronounced Peer-loo-ee) functions as his faithful, if boastful and cheating, midget sidekick.

In 1958, Spirou magazine started to publish the Johan et Pirlouit story La Flûte à six trous ("The Flute with Six Holes").[3] The adventure involved them recovering a magic flute, which required some sorcery by the wizard Homnibus. In this manner they met a tiny, blue-skinned humanoid creature in white clothing called a "Schtroumpf", followed by his numerous peers who looked just like him, with an elderly leader who wore red clothing and had a white beard. Their first full appearance was published in Spirou on October 23, 1958. The characters proved to be a huge success, and the first independent Smurf stories appeared in Spirou in 1959, together with the first merchandising. The Smurfs shared more adventures with Johan and Pirlouit, got their own series and all subsequent publications of the original story were retitled La Flûte à six Schtroumpfs(also the title of the movie version of the story).

The original term and the accompanying language came during a meal Peyo was having with his colleague and friend André Franquin at the Belgian Coast. Having momentarily forgotten the word "salt", Peyo asked him (in French) to pass the schtroumpf. Franquin jokingly replied: "Here's theSchtroumpf—when you are done schtroumpfing, schtroumpf it back..." and the two spent the rest of that weekend speaking in "schtroumpf language".[5] The name was later translated into Dutch as Smurf, which was adopted in English.

With the commercial success of the Smurfs came the merchandising empire of Smurf miniatures, models, games, and toys. Entire collecting clubs have devoted themselves to collecting PVC Smurfs, and Smurf merchandise.

The storylines tend to be simple tales of bold adventure. The cast has a simple structure as well: almost all the characters look essentially alike—mostly male (there are three female Smurfs: Smurfette, Sassette, and Nanny Smurf), short (3 apples high),[6] with blue skin, white trousers with a hole for their short tails, white hat in the style of a Phrygian cap, and sometimes some additional accessory that identifies a personality (for example, "Handy" Smurf wears overalls instead of the standard trousers, a brimmed hat, and a pencil above his ear). Smurfs can walk and run, but often move by skipping on both feet. They love to eat sarsaparilla (a species of Smilax) leaves, whose berries the Smurfs naturally call "smurfberries" (the smurfberries appear only in the cartoon; in the original comics, the Smurfs only eat the leaves from the sarsaparilla).

The Smurfs fulfill simple archetypes of everyday people: Lazy Smurf, Grouchy Smurf, Brainy Smurf, and so on. All Smurfs, with the exception of Papa, Baby, Smurfette, Nanny and Grandpa, are said to be 100 years old. There were originally 99 Smurfs, but this number increased as new Smurf characters appeared, such as Sassette and Nanny. All of the original Smurfs were male; later female additions are Smurfette and Sassette - Smurfette being Gargamel's creation, while Sassette was created by the Smurflings.

A characteristic of the Smurf language is the frequent use of the undefinable word "smurf" and its derivatives in a variety of meanings. The Smurfs frequently replace both nouns and verbs in everyday speech with the word "smurf": "We're going smurfing on the River Smurf today." When used as a verb, the word "Smurf" typically means "to make," "to be," "to like," or "to do."

In the animated series, only some words (or a portion of the word) are replaced with the word "smurf." Context offers a reliable understanding of this speech pattern, but common vocabulary includes remarking that something is "just smurfy" or "smurftastic."

In Schtroumpf vert et vert Schtroumpf (see Smurf Versus Smurf), published in Belgium in 1972, it was revealed that the village was divided between North and South, and that the Smurfs on either side had different ideas as to how the term "smurf" should be used: for instance, the Northern Smurfs called a certain object a "bottle smurfer," while the Southern Smurfs called it a "smurf opener." This story is considered a parody on the still ongoing taalstrijd (language war) between French- and Dutch-speaking communities in Belgium.

When they first appeared in 1958, the Smurfs lived in a part of the world called "Le Pays Maudit" (French for "the Cursed Land"). To reach it required magic or travelling through dense forests, deep marshes, a scorching desert and a high mountain range.[9] The Smurfs themselves usestorks in order to travel long distances, such as to the kingdom where Johan and Pirlouit live, and keep up-to-date with events in the outside world.[10]

In the Johan et Pirlouit stories, the Smurf village is made up of mushroom-like houses of different shapes and sizes in a desolate and rocky land with just a few trees. However, in the Smurf series itself the mushroom-like houses are more similar to one another and are located in a clearing in the middle of a deep forest with grass, a river, and vegetation. Humans such as Gargamel are shown to live nearby, though it is almost impossible for an outsider to find the Smurf village except when led by a Smurf.

The Smurfs' community generally takes the form of a cooperative, sharing, and kind environment based on the principle that each Smurf has something he or she is good at, and thus contributes it to Smurf society as he or she can. In return, each Smurf appears to be given their necessities of life, from housing and clothes to food without using any money in exchange.

Papa Smurf is the leader of the community. Other Smurfs are generally named after their personality disposition, for example, Brainy, Greedy, Vanity, Lazy, Clumsy, Hefty, Jokey, Dreamy, Grouchy, or their profession, for example, Poet, Actor, Handy, Harmony, Farmer, Clockwork, Painter, Tailor, Miner, Architect, Reporter, Timber, Barber and Doctor Smurf. Other Smurf characters include Gutsy Smurf and Smurfette. Smurfette was created by Gargamel to lure the other smurfs. Papa Smurf then changed her into what we see today. The non-Smurf characters who would appear later would include their enemies the wizard Gargamel, his cat Azrael, and Gargamel's godfather Balthazar; and their friends the page Johan and his young friend Peewit and the wizard Homnibus.