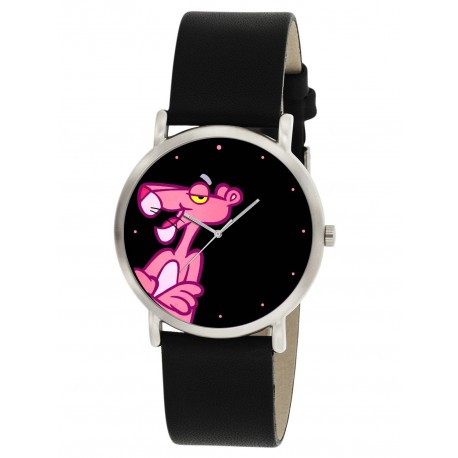 The Pink Panther is the main and title character in the opening and closing credit sequences of every film in The Pink Panther series except for A Shot in the Dark and Inspector Clouseau. His popularity spawned a series of theatrical shorts, merchandise, a comic book, and television cartoons. He starred in 124 shorts (either theatrical or televised), 10 television shows and three prime time specials. He's also known as Nathu and Pangu in East and South Asia and Paulchen Panther (Little Paul the Panther) in Germany.

The animated Pink Panther character's initial appearance in the live action film's title sequence, directed by Friz Freleng, was such a success with audiences and United Artists that the studio signed Freleng and his DePatie-Freleng Enterprisesstudio to a multi-year contract for a series of Pink Panther theatrical cartoon shorts. The first entry in the series, 1964's The Pink Phink, (which was also his first appearance) featured the Panther harassing his foil, a little white moustached man who is actually a caricature of Friz Freleng (this character is officially known as "The Little White Guy" and/or "The Man" [1]), by constantly trying to paint the little man's blue house pink. The Pink Phink won the 1964 Academy Award for Animated Short Film, and subsequent shorts in the series, usually featuring the Pink Panther opposite the little man, were successful releases.

In an early series of Pink Panther animated cartoons, the Pink Panther generally remained silent, speaking only in two theatrical shorts, Sink Pink and Pink Ice. Rich Little provided the Panther's voice in the latter shorts, modelling it on that ofDavid Niven (who had portrayed Clouseau's jewel-thief nemesis in the original live-action film). Years later Little would overdub Niven's voice for Trail of the Pink Panther and Curse of the Pink Panther. All of the animated Pink Panther shorts utilized the distinctive jazzy theme music composed by Henry Mancini for the 1963 feature film, with additional scores composed by Walter Greene or William Lava.

Pink Panther shorts made after 1969 were produced for both broadcast and film release, typically appearing on television first, and released to theatres by United Artists. One version of the show was called The Think Pink Panther Show. A number of sister series joined The Pink Panther on movie screens and on the airwaves, among them The Ant and the Aardvark, The Tijuana Toads (a.k.a. The Texas Toads), Hoot Kloot, and Misterjaw (a.k.a. Mr. Jaws and Catfish). There were also a series of animated shorts called The Inspector, with the bumbling Clouseau inspired Inspector and his sidekick Sgt. Deux-Deux, whom the Inspector is forever correcting. ("Deux" is French for "two," meaning the little man's name is both a pun and a play on words, "two" appearing twice in the name.) Other DePatie-Freleng series included Roland and Rattfink, The Dogfather (aGodfather pastiche), with a canine Corleone family and two Tijuana Toads spinoffs, The Blue Racer and Crazylegs Crane.

In 1976, the half-hour series was revamped into a 90-minute format, as The Pink Panther Laugh and a Half Hour and a Half Show; this version included a live-action segment, where the show's host, comedian Lenny Schultz, would read letters and jokes from viewers. This version flopped, and would change back to the original half-hour version in 1977.