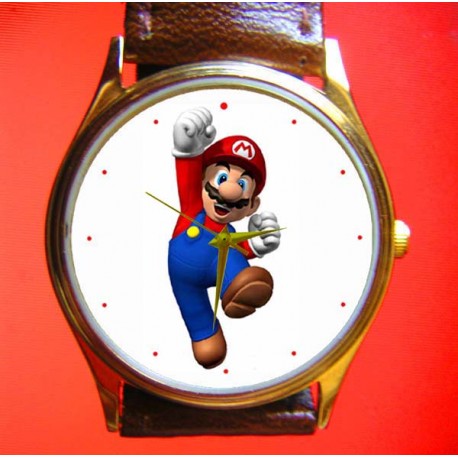 uper Mario Bros. (スーパーマリオブラザーズ Sūpā Mario Burazāzu?) is a 1985 platform video game developed by Nintendo, published for the Nintendo Entertainment System as a pseudo-sequel to the 1983 game Mario Bros. It is the first of the Super Mario series of games. In Super Mario Bros., the player controls Mario and in a two-player game, a second player controls Mario's brother Luigi as he travels through the Mushroom Kingdom in order to rescue Princess Peach from the antagonist Bowser.

The success of Super Mario Bros. has caused it to be ported to almost every one of Nintendo's major gaming consoles. In late 2010, as part of the 25th anniversary of the game's release, Nintendo released special red variants of the Wii andNintendo DSi XL consoles in differently re-packaged, Mario-themed, and limited edition bundles in all regions. The player controls Mario throughout the Mushroom Kingdom. Mario's abilities can be changed by picking up certain items; for example, Mario is able to shoot fireballs if he picks up a Fire Flower. He can also use a star power to move quickly and dilegently through levels.

The player takes on the role of the main protagonist of the series, Mario. Mario's slightly younger fraternal twin brother, Luigi, is only playable by the second player in the game's multiplayer mode, and assumes the same plot role as Mario. The objective is to race through the Mushroom Kingdom, survive the main antagonist Bowser′s forces and save Princess Toadstool. The player moves from the left side of the screen to the right side in order to reach the flag pole at the end of each level. A prevalent rumor that it is possible to jump over the flag pole was later confirmed by Gametrailers.

The game world has coins scattered around it for Mario to collect, and special bricks marked with a question mark ("?"), which when hit from below by Mario, may reveal more coins or a special item. Other "secret" (often invisible) bricks may contain more coins or rare items. If the player gains a red and yellow Super Mushroom, Mario grows to double his size and can take one extra hit from most enemies and obstacles, in addition to being able to break bricks above him. Players are given a certain number of lives (and may gain additional lives by picking up green and orange '1-Up' mushrooms, collecting 100 coins, or defeating several enemies in a row with a Koopa shell), which are lost when Mario takes too much damage, falls in a pit, or runs out of time; the game ends when all lives are lost. Mario's primary attack is jumping on top of enemies, though many enemies have differing responses to this. For example, a Goomba will flatten and be defeated,[11] while a Koopa Troopawill temporarily retract into its shell, allowing Mario to use it as a projectile. These shells may be deflected off a wall to destroy other enemies, though they can also bounce back against Mario, which will hurt or kill him. An alternate way to damage enemies is with the Fire Flower, an item which, when picked up, changes the color of Mario's outfit (or only increases his size if a red and yellow mushroom had not been used previously) and allows him to shoot fireballs. A less common item is the Starman, which often appears from concealed or otherwise invisible blocks. This makes Mario temporarily invincible to most hazards and capable of defeating enemies on contact.[

The game consists of eight worlds with four sub-levels called "stages" in each world. The final stage of each world takes place in a castle where Bowser or one of his decoys are fought. The game also includes some stages taking place underwater, which contain different enemies. In addition, there are bonuses and secret areas in the game. Most secret areas contain more coins for Mario to collect, but others may contain "warp pipes" which allow Mario to advance to later worlds in the game, skipping over earlier ones.